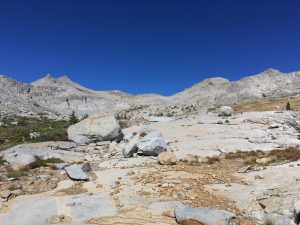 I am getting close to finishing the SPS list (234 out of 247), and Foerster was my northernmost remaining peak. It is normally done from the West side, approached by a long drive from Bass Lake via Beasore road. I had attempted it this way last year before my bike tour, failing at a bike-and-hike that was longer than I had anticipated, and too long for a cold, short October day. Not wanting to make the long and expensive drive for a mediocre peak, I considered my Eastside options. Foerster is in the skinny part of the Sierra near Mammoth, but unfortunately the rugged Ritter Range and the deep valley of the San Joaquin are in the way. The least-bad route seems to be around the north side of the range, taking the trail from Agnew Meadows to Thousand Island Lake, then crossing North Glacier Pass and descending the San Joaquin to Bench Creek. This is about 40 miles round-trip, with 11,000 feet of elevation gain — long but manageable, even in my current deficient state.

From my preferred camp near Minaret Vista, I drove down to Agnew Meadows and started by headlamp around 4:30. I soon realized that my headlamp was almost dead: its garbage Amazon Basics rechargeable batteries no longer hold much charge. Holding it in my hand at waist level helped, but it was still almost impossible to run until dawn became bright enough past the Shadow Lake junction. The trail to Thousand Island Lake is the typical Sierra horse-trench, filled with powdered dust and manure and broken up by giant steps. I shortcut it a few times above the manzanita zone, as much because the woods were more pleasant as to save time.

I reached Thousand Island Lake as the sun rose on Banner Peak, and was not the only person photographing the classic peak-and-water scene in “magic” light. I was feeling surprisingly good given my fitness, and jogged much of the trail around the lake, passing a tent village of people camped at this popular spot. There is an increasingly-worn use trail from the lake’s west end to North Glacier Pass, probably from a mix of people climbing Ritter and traveling the increasingly popular Roper High Route. I missed the trail on the way out, but had little trouble reaching the pass over grass, slabs, and big stable talus. 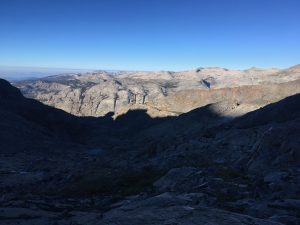 I dropped to the lake on the other side, then made my way along its outlet stream down mostly pleasant slabs for awhile before angling southwest toward where the San Joaquin trail is shown on maps. Near where the stream topples over some cliffs in a long cascade, I found a campsite and a faint trail heading west. What I thought was a use trail turned out to be an old developed trail that once led to… something… near the campsite (I found an old metal cable, but no mine shaft or structures). This trail switchbacked down west of the cascade, joining the dotted line on the map. 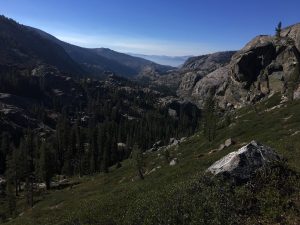 The “official” trail is faint to nonexistent at first, and never in good shape, but I managed to follow a mix of rockwork and cairns down to just above Bench Creek around 8800 feet. I had descended from over 11,000 feet at the pass, and would have to climb to just over 12,000 at Foerster’s summit. Ugh. I easily found a dry crossing this late in a dry year, then shortcut the junction a bit, thrashing through some manzanita, then dropping toward the creek. I picked up a decent use trail on the right side, which I followed until it disappeared below a headwall. This was easily overcome via some obnoxious talus, and I soon found myself on the pleasant flat above. 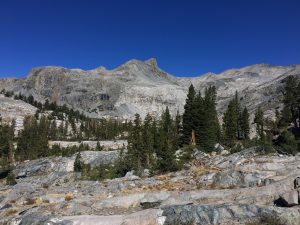 The creek splits at the flat, with the left branch leading to Blue Lake and Foerster, the right to Ansel Adams. I had thought of doing both as a lollipop, but realized that it would be too much for me now. Cruising up the broad, gentle left valley, I was surprised to see a scraggly-looking guy descending toward me. I expressed my surprise at seeing someone else in such a remote location, and he said he was doing Roper’s High Route. Despite a friend having just done this route, I had not realized just how far west it went. 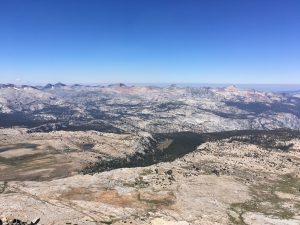 Out of water, I made a slight detour to refill at Blue Lake, then headed up the obvious route on Foerster’s southeast side. I was starting to feel the miles in my legs, but still managed a non-pathetic effort on the sand- and talus-climb to the summit. The closest I had been to this part of the Sierra was Electra Peak to the north, many years ago, so I found the views especially interesting. To the east across the San Joaquin was the dark, rugged, and seldom-visited west side of the Ritter Range. To the east, the Clark Range rose across a broad valley. To the north, I could follow the ridge across Electra and Rogers to Lyell. I could even see Half Dome in the distance, indicating that I was too far west to have started on the east side. 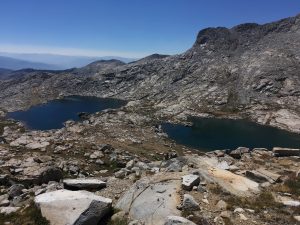 It had taken me exactly seven hours to reach the summit. I was pleased with my performance, and with the certainty that there would be no evening headlamp time. Hiking and jogging back down Bench Creek, I looked at the map and decided to cut across to Twin Island Lakes, hopefully saving myself some elevation loss and bushwhacking. My aging phone battery had suffered from the morning cold, so I tried not to look at the map too often. 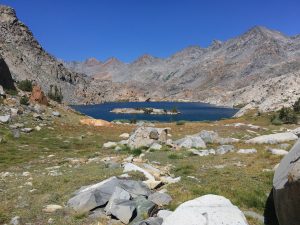 What looked like a nice level traverse on the map turned out to be a somewhat annoying up-and-down affair weaving through gullies and around cliff bands. There is probably a better line here, since this is where the High Route goes, but I did not find it. Twin Island Lakes are two lakes, each with a single island, probably looking like someone giving side-eye from the air. I passed both on the right, contouring back toward North Glacier Pass halfway past the second. I contoured high, eventually rejoining the trail near the top of the cascade. 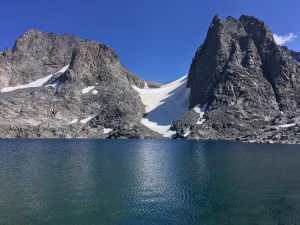 Saving phone battery cost me some suffering on the way to the pass, as I strayed too far left into some wretched talus. I corrected my course below Lake Catherine, then wondered if it would be faster to go through the Ritter-Banner saddle to Lake Ediza. The other side required an ice axe and crampons when I did it in 2010, but global warming has doubtless shrunk the Ritter Glacier since then. Not wanting to take the chance, I returned via North Glacier Pass, stopping for water and a healthy dose of ibuprofen to ease my knees, then passing a couple probably returning from Ritter.

I was less able to jog around the lake, but found my running legs on the descent, and kept the rhythm going on the near-flat stretch between the Shadow Lake junction and the climb to Agnew Meadow. I knew I would pay for it the next day, but I jogged the flats and even some gentle uphills on my way back to the car, making it home in just under thirteen hours. I grabbed a couple gallons of Agnew Meadows water, which was every bit as metallic and horrible as I remembered, then drove into town for more trail food and WiFi outside the welcome center before heading out to the woods to camp. It was good to know that I have sufficient will and misanthropy to overcome my mediocre fitness. If I can regain some resilience, I may actually be able to do something with what little is left of this season.

Backside of the Ritter Range

Half Dome near the center