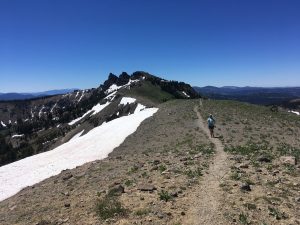 I always look forward to going near Tahoe, because it’s an excuse to visit my friend Renee, a solid all-around athlete who often gets me to do things outside my normal routine. In this case, she had planned a long point-to-point trail run with a local friend around the time I would be passing through. The route started north of Mount Lola, then made its way south to Squaw Valley via a mixture of the PCT, other trails, and a bit of cross-country, tagging peaks from Lola to Granite Chief. After a few days of hike-and-bike, I hoped my ankle had recovered enough to put up with a 45-mile day. 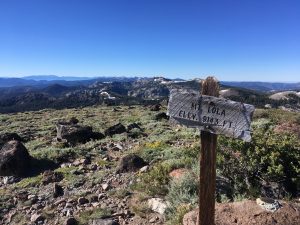 I aired out my car and hid my dirty socks, and Renee politely hid her disgust for the short drive over to her friend’s house, where we all masked up to share a car to the north Mount Lola trailhead. I am slowly getting used to the Coronavirus era, but some precautions are still strange to me; wearing masks to share a car is one, as is rolling down the window to eat, as if you are smoking. The dirt road to the trailhead was fine for a passenger car, but rough enough that I was glad not to be driving mine, further scrambling its contents. It was just cool enough for a windbreaker at the start, as we jogged and hiked through the woods on a steady, wooded climb south. Mount Lola’s summit was much as I remembered it from 2014, with the old brick pillars (from a survey post?), though it thankfully lacked a disgusting ladybug swarm. The first part of the descent trail was loose, rocky, and unpleasant, but it soon turned runnable, as many Tahoe-area trails are. With a final bit of slippery hard-packed dirt, we reached the jeep road around White Rock Lake, its campsites mostly abandoned after the holiday weekend. 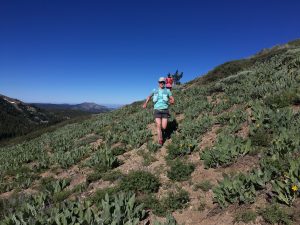 Once around the lake, we continued downhill a bit to pick up the PCT. The mosquitoes were out in multitudes below treeline, and sometimes aggressive enough to bite even while walking. Oddly, the PCTers were not out in the numbers I had seen near Ebbetts Pass a few days before. I was hoping to see the woman carrying a cat on her pack again, but probably missed her by a couple of days. We stopped for water and bug bites at the signed Unconformity Spring (I did not see an unconformity nearby), then took off cross-country to catch the semi-official trail over Basin. This was one of the better sections of the route, with no bugs above treeline, runnable trail, and good views of Castle and the granite basin to its north. 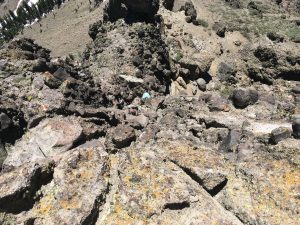 Renee’s friend skipped Castle, having already done it recently, but we slogged up the steep, loose trail to the three confusing summit knobs. The first, closest to the standard trail from Donner Pass, seems to be the most popular; the second looks highest; and the third, which is most technical, holds the benchmark and register. I tagged all three by mistake, while Renee was smart enough to just do the highest. The third summit is a fun, steep scramble with big, positive conglomerate holds. 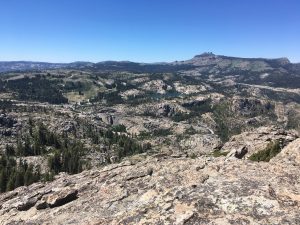 We regrouped at the saddle, then jogged down to the Donner Summit rest stop. The vending machines were closed, but thankfully the water was still on. This was my least favorite part of the route, as you can hear the constant traffic noise from the interstate, the trail wanders too much between it and the old Donner Pass road, and it was hot and dry. Once across the old Donner road, we climbed the popular switchbacks toward Donner Peak. This section is much less annoying going up than down, with big steps and lots of loose rocks. It was also dry, with no good water between the interstate and the south side of Tinker Knob. Fortunately there was still a snowbank along the way to supplement the remaining water in my bladder. 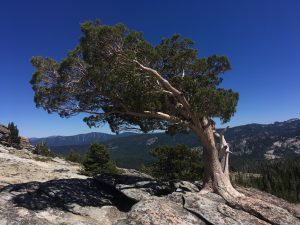 We took a side-trip to Donner Peak, with its incongruous “pancake stack” granite summit rocks, then followed the trail up the back side of ski area over Judah (the railroad surveyor) to Lincoln (the President who ordered it built). Lincoln’s summit is disappointing, with a building and three large propane tanks near the highpoint, and a ski lift not too far off. We found more snow near the steep, loose trail off the back side, then better running along the ridge. The crosswind across the bare ridge was getting strong, threatening to steal my hat and occasionally driving dust into my eyes. 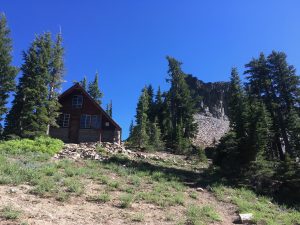 Not having paid much attention to the route, I was surprised to come upon the Sierra Club ski hut below Anderson. It was large and nice by American standard, though it did not compare to the ones near Rogers Pass, much less anything in the Alps. We sat on the porch a bit, then followed a steep, rocky trail past the outhouse to Anderson’s summit, harvesting more snow along the way. The summit plateau sucked, being covered in loose volcanic rocks and woody brush. Granite Chief and Needle (which should be called Nipple), our last two planned peaks, looked awfully far away. My optimistic choice not to bring a headlamp started to seem like a mistake. 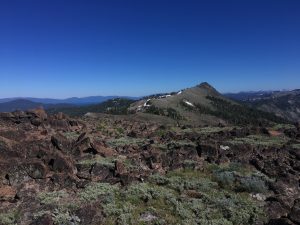 The crosswind became intense on the long traverse to Tinker Knob, draining my motivation as it always does. We made the easy scramble up the summit blob, and agreed that we lacked the time and energy to continue to Granite Chief and the Nipple. Renee’s friend tweaked her ankle on the loose rocks descending the knob, further encouragement to cut things short. Had I paid more attention to the map, I would have known that skipping them would not save much time (it’s probably only about three miles shorter), but alas, I will have to come back another day to complete the OGUL list. 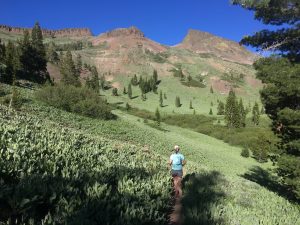 The trail south of Tinker Knob is another pleasant run, dropping well below Billy’s Peak into the bowl to the west, through woods and fields of Indian Toilet Paper plants before reclimbing to a saddle near Granite Chief. There were a couple of good streams in the bowl, though it was cool enough that I did not need more water. We all took off at our own paces on the descent to Squaw, which started out fun and fast, then turned rocky and annoying in the middle. I ran into a few people out for evening walks near the bottom, and inexplicably freaked out some woman’s dog, which ran away from me down the trail for a quarter mile before deciding to circle back around. Eager to be done, I cut down a trail ending in a hotel parking lot, then wandered around looking for Renee’s car, which was fortunately parked in an obvious place. This was a fun route (of course — it’s Renee’s backyard), though probably best done before mid-July, while there is still snow for water south of Donner Summit.