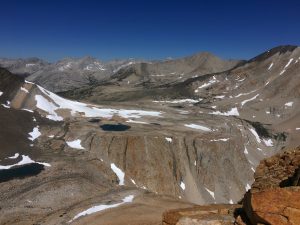 I needed help with my early starts and long days, and my friend needed some with her scrambling. Somehow these goals and life’s constraints led me to spend two days at Taboose Pass, by far my least favorite of the big Eastern Sierra approaches. Upper Taboose is spectacular, with its lakes and waterfalls, towering orange buttresses on either side, and expansive view west across a plain to Arrow Peak and the South Fork of the Kings. However, almost all of the trail is horrible, ranging from sand at the start to loose softball-sized rocks higher up. Much of the lower reaches burned last summer, making the dry Owens Valley even more barren for now; it will soon fill in with buckthorn, making the trail even worse. I remembered the road to the trailhead being obnoxious but doable in a passenger car the last time I visited. This time I found it barely passable, and was forced to drive many sections at less than 5 MPH to protect my tires and undercarriage. 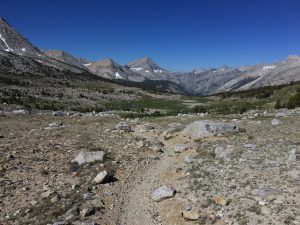 The original plan was to do White Peak, a class 3 climb slightly southwest of the pass that had been on the Sierra Challenge some years back. After taking the usual three hours to reach the pass, we decided instead to head for Ruskin and Saddlehorn, on the other side of the Kings. I had traversed from Ruskin to Vennacher Needle in 2012 during the Challenge, admiring the sharp ridge jutting east midway between them. I later learned that it was named “Saddlehorn,” and was supposedly class 4 from the east or west. Another traverse, up Saddlehorn and around to Ruskin, seemed like a good plan. 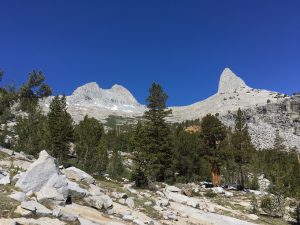 We easily found the old trail into the Kings, cutting the corner to the JMT, then followed the Jolly Manure Trench a short distance before climbing northwest through open woods and slabs. This area consists of three open glacial cirques, bounded by Ruskin’s southeast and east ridges, Saddlehorn, and Vennacher Needle’s east ridge. We aimed for the middle one, grabbing water below its lake before approaching the south side of Saddlehorn’s east ridge. 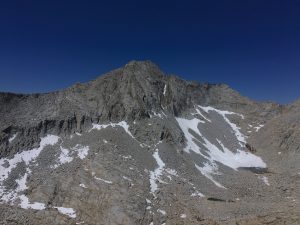 I saw a line of ledges and broken terrain that would gain the crest from there, and tried to find the easiest route. I found nothing easier than exposed class 4, which was more than my friend wanted to do, not having been on much beyond class 2 boulder-hops in a couple of years. I continued solo, making a thin traverse, then climbing a loose boulder-slope to the crest. From there, more class 3-4 climbing along the ridge led to the summit blocks, one of which had a cairn. It looked intimidating from most sides, but was fortunately easy from the southeast. I found an old register in a band-aid tin dating back to 1979, and a newer one from the Sierra Challenge in a salsa bottle. The older one had an amusing entry from a guy nervous about his prospects for descent, while the newer one featured the expected folks (Scott, Iris, and Grundy). I added my name, put both in the bottle for better protection, then retraced my route. 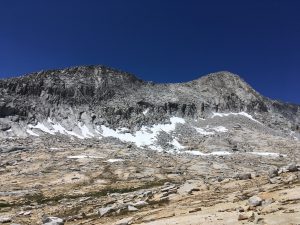 Ruskin’s east ridge was supposed to be a classic class 3 line. I hadn’t read a description, and don’t remember if I climbed that or the southeast ridge in 2012, but figured it would be more moderate than Saddlehorn. We crossed the bowl south, then made our way over the toe of the ridge. I had hoped to go straight up its initial step, but that proved tricky, so we contoured around the south side until we found easier, broken class 2-3 terrain leading to the crest. This is long and fairly flat, with consistent exposure on the right. The climbing is a mixture of boulders and “sidewalk” sections that go quickly if you don’t mind the exposure. 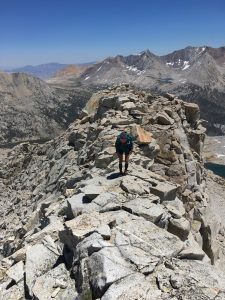 The ridge steepens a bit to a false summit, then narrows, becoming exposed on both sides, though the climbing remains mostly easy except for one step. Amusingly, I found a “chicken out register” at this step, a booklet in a red-painted can containing entries from some memorial party who had decided not to chance giving themselves something new to memorialize. My friend was done with exposed scrambling for the day, so I quickly scampered over to the summit, finding to my surprise that Teresa Gergen had been there earlier in the day. How she had arrived, and where she had gone next, were a mystery. Maybe she came up from Lakes Basin on a backpack. 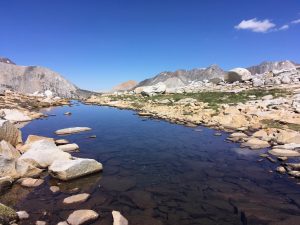 Rather than retracing the whole ridge, we dropped down a chute southeast of the false summit. Fortunately it did not cliff out, and we were soon back on easy terrain, passing a couple of nice lakes on the way down to the Kings. From there it was a straightforward slog back to the pass, accelerated by swarms of mosquitoes now that the morning’s winds had ceased. I took a couple ibuprofen at the pass, then settled into the miserable descent. Most of the trail is too loose and rocky to truly run, but with great effort and concentration you can move slightly faster than a walk. Only the last mile or two is fun, sprinting down sand toward the valley floor. We reached the trailhead right at sunset, with just enough time to eat and repack our bags before trying to get a full night’s sleep. 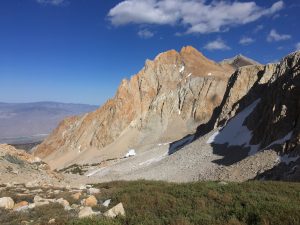 I knew I would not enjoy doing Taboose twice in two days, but I had made the drive, and perhaps could do White. We got a slightly earlier start, which kept us in the shade almost to the first water crossing and made the climb much more pleasant. This was counteracted by fatigue from the day before, and we reached the pass in about the same time. Neither of us was all that enthusiastic about White, so we settled on the “Orange Ogre,” a prominent buttress south of the pass that is the tip of Goodale’s north ridge. While it looks like it might have some big, hard routes from the north, it is an easy class 2 boulder pile from the west.

There was a cairn on the flat, semi-exposed summit, but no register. The views east down Taboose Creek, and northwest across the broad pass, are impressive. Goodale and Striped, to the south and southwest, look like horrible talus-piles; I had done them many years ago, and did not remember them being that bad. We stalled on the summit for awhile, putting off the inevitable misery of another Taboose descent, then retreated down the west face. Rather than returning to the pass, we turned right, following the start of Taboose Creek to regain the trail lower down. The descent was slower this time, because I was tired and my ankle was more sore, but also because I was in a worse mood, already dreading the slow drive back to pavement, and the start of a very long drive north. At the trailhead, I rinsed off my feet and grabbed some water, then bid farewell to my friend, who would probably stay another day to do the pass yet again. As for myself, I would be fine if this were the last time in my life.