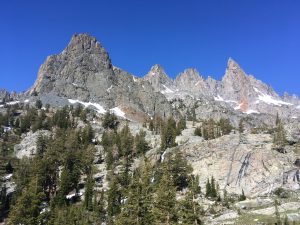 The Minarets are the most impressive feature of the skyline near Mammoth Lakes, a series of dark and improbably sharp peaks west of town. There are a lot of them, and while they can all be traversed in a day, their difficulty and sometimes-poor rock make it unlikely that I will ever do so. However, I have been slowly picking them off over the years, and have summited well over half, including the highest ones. With temperatures over 100 degrees in the Owens Valley, it seemed a good time to head uphill for awhile.

An easier outing the day before turned into a trail-side nap — my insatiable trail hunger suggests that I am close to having the fitness to actually do interesting things. Climbing a few lesser Minarets would hardly count as such, but it would be both an excuse to visit some scenic terrain, and a good opportunity to practice my steep scrambling on dubious rock, which has grown rusty. I briefly thought of biking from my camp along the Scenic Loop, but decided instead to start from Minaret Vista. I was glad I did so, both because the ride from north of town would have taken too much time, and because I learned that the road beyond Minaret Summit is closed. This is a great thing for many reasons: it is an excuse to bike, it keeps the crowds away, and it may even put the horse packers out of business (one can dream…). 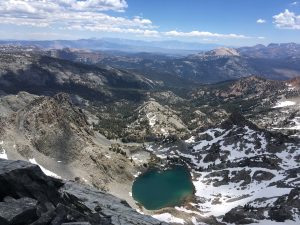 There were too many cars parked near the entrance gate, but I found a nice flat spot near my usual camp spot, and rewatched a couple episodes of “Breaking Bad” to put myself to sleep. I was biking downhill into a notorious pool of cold air, so I took my time in the morning. A sign on the gate said “no bicycles,” but a local-looking guy nearby said he had been riding his into the valley without trouble, so I ignored it and dropped into the expected inversion. I had not been beyond Agnew Meadows in years, and was dismayed at how quickly and far the road drops after reaching the valley floor. I started catching an official-looking vehicle on my way to Devil’s Postpile and, not wanting to get yelled at, paused to let it pull ahead. Once at the Postpile, I saw a half-dozen vehicles at the employee housing, a sign saying “no bikes beyond this point” at the trailhead, and a couple of bikes locked to a nearby rack. So much for “no bicycles…”

The trail up Minaret Creek is normally frustrating, with large steps and loose, sharp rocks making it difficult to run, but I was stuck walking for a few days while my ankle recovered, so it did not bother me. I found the log bridge crossing the creek destroyed, and followed a trail along the bank, hoping to find another log farther up. I saw a potential crossing, but it looked a bit dubious, and the trail appeared to continue, so I ignored it. This turned out to be a mistake, as the trail faded to nothing, leaving me to make my slow way through the woods on the other side of Johnson “Meadow” (a swamp this time of year). I eventually crossed above the swamp, and regained the trail, which I followed on the long, slow climb to Minaret Lakes. I passed a couple backpackers coming down, but otherwise had the area to myself. 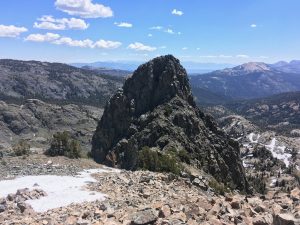 I left the main trail at the lower end of the lakes, making my way toward a snow chute between Riegelhuth and Pridham Minarets that Bob’s trip report had suggested as the best route. I had brought ice axe and crampons for this steep, north-facing gully, but found that I was able to avoid the snow first on the talus fan, then on the couloir’s blocky sides. I reached the saddle with no more than a bit of third class scrambling, and found Pridham to be an unimpressive talus mount, hardly worthy of being called a Minaret. 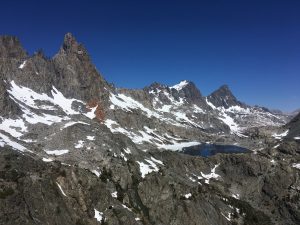 Riegelhuth was a different matter, offering a couple of possible lines, but nothing obvious. As I approached, I spotted a series of steep gullies and ledges to the right that might work. They did not look easy, but I needed the practice, so up I went. They turned out to offer steep and thought-provoking climbing, probably low fifth class, but the rock was mostly good and positive. I reached the summit without too much trouble, finding some climber trash (old slings), but no register. After admiring the view of Lake Cecile and the higher Minarets, I took a different route on the way down, finding a fourth class gully down the west-northwest side. Though short, Riegelhuth was a worthy summit, with no easy way up. Pridham, on the other hand, was class 2 talus from the east, and the same to the west. I boulder-hopped up, looked around a bit, then continued on my way. 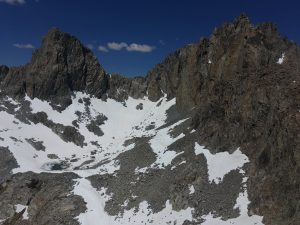 The next summit in line, Kehrlein, looked far more interesting, but I had already done it many years ago, so I instead dropped left into the cirque above Dead Horse Lake, hoping that something on the ridge north of Starr Minaret would go. Though the headwall looked steep from the approach, I found a broken third class ramp trending left to the ridge. The south- and east-facing snow had been baking long enough at this point that I was able to kick steps to the rock, not needing the crampons and axe I had lugged so far. 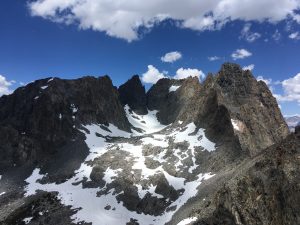 Starr Minaret was a bit steeper than Pridham, but still only class 3 from the west; I made things a bit more interesting by staying near the ridge. I found a new-ish register in a salsa bottle on the summit, plus slightly older paper in a film canister and aspirin bottle. Of the handful of parties signing in, most seemed to be on a Minarets Traverse. This confused me, since Starr is an outlier of the main Minarets ridge. One party mentioned that it was their eighth summit that day, which made no sense in either direction.

I had thought of tagging Adam Minaret, another outlier southwest of Michael, but I had once again failed to pack enough food. Instead, I retreated down my broken ramp, dropped to Dead Horse, and regained the trail in the woods below Minaret Lakes. While the trail remained uncrowded on the hike home, there were a few more people. I first met two guys and a woman, all fit, attractive, and scantily clad, and passed with a quick, dead-eyed “howdy.” I talked a bit more with a family at the stream ford, learning that they were doing part of the JMT as I put my shoes back on.

I returned to the trailhead around mid-afternoon, finding a ranger talking on the phone outside his cabin, who apparently had no problem with my being down there. I changed into bike shorts, then ground out the 1500-foot climb back to Minaret Vista and my car. I had a nice campsite, and had thought of a plan for the next day, so I tore through a larger post-hike meal, reloaded my pack with more food, then whiled away the rest of the evening.