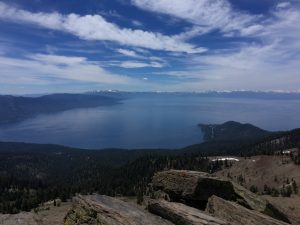 Verdi (pronounced like “hair dye,” not the requiem composer’s name) is a prominent summit northeast of Lake Tahoe, and a worthy reason to drive all the way north to… ah, who am I kidding? It’s a forested bump with a road to an old fire lookout on top, with enough prominence to give me peak-bagger points. In short, it was a perfect peak to tag with Renee and her not-quite-three-year-old. A few sections of the road were rocky and steep enough to be unpleasant on my touring bike, so we hiked it. The kid did an admirable job and, with steady encouragement and other devious motherly psychological tricks, walked more than his age in miles. The lookout was well-situated, with a clear view of the train tracks and highway along the Truckee River to the south and east, snowy Castle, Basin, and Lola to the west, and the peaks surrounding Lake Tahoe to the south. 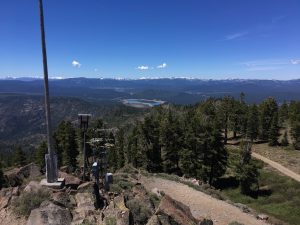 Points accomplished, it was time to enjoy some alternatives to my recent Eastern Sierra desert slogs, including road cycling (I am slow), mountain biking (I am bad), and trail running (I can do this one, though my aging body complains). While I could never afford to live there, I am reminded every time I visit that Tahoe has a wonderful backyard. It lacks the major peaks found in the Owens Valley or the Alps, but has acres of forested public land with miles of trails and fire roads, making it a bit like where I grew up. While not a destination, it has everything necessary for day-to-day outdoor activity. 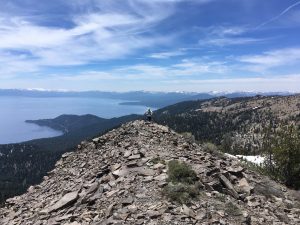 For example, there are several passes over the Nevada side, connected along the top by trails, and the bottom by the lake road. These allow excellent point-to-point runs with a bike shuttle. Renee had mapped out a run from the Brockway road to the Mount Rose road, tagging one fire lookout and a number of minor summits along the way. It would have been a better run the other way, but I convinced her to run it in the net uphill direction, then bike shuttle back. Unlike the lookout on Verdi, which was trashed, the one on Martis was well-kept, with unbroken windows and a silhouette map identifying the peaks on the skyline. Much of the rest of the run was uphill at just the right grade to be frustrating (I should have listened…), but the trail was mostly snow-free and the views were excellent. The return ride along the lake was not pleasant, with narrow shoulders and constant traffic, but both Brockway and Mount Rose roads have good shoulders and pavement, so those parts were fine. 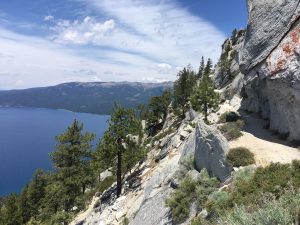 Most Tahoe trails are rocky and “technical,” thus miserable for me with my limited mountain biking skills, but the Incline and Marlette Flume trails are much better. After mistakenly starting off on the Tyrolean trail, a “flow” trail that was more of a survival ride on my touring bike, I enjoyed a long ride on smooth trails and gentle grades. Supposedly the trails follow some old flumes, but I saw no evidence of such. It was a weekday, but the trail was somewhat crowded with both cyclists and pedestrians, making some of its exposed blind corners a bit unnerving, but I was still enjoying myself. 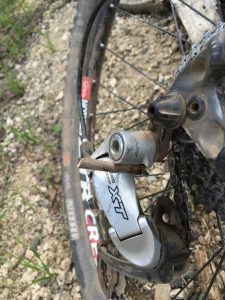 I was hoping to continue all the way to Spooner Lake and Highway 50, but at Marlette Lake’s southern end, I finally figured out why my rear derailleur had been acting up: my derailleur cable snapped. Riding back in my outermost gear would have involved a lot of hike-a-bike, so, thinking a minute, I wedged a small stick into the derailleur to hold it somewhere near the center of its range. I gingerly pedaled back toward home a bit, then bummed duct tape from some Game and Fish employees to secure my stick. With two middle-of-the-range gears, I only had to hike one part of the trail, and could pedal up to a non-pathetic speed on the flats and descents. 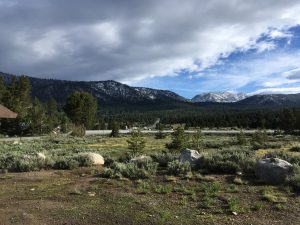 After a stop in Carson for a replacement cable and brake pads — bikes are an endless money-pit — I continued around to check out some peaks south of the lake. Most northern Sierra peaks are short climbs, so I tacked on some cycling to give myself a bit of a challenge. I camped at the junction with the Luther Pass road, where it rained overnight, then took my time in the morning, eyeing the fresh snow on the peaks and fixing my bike. When it was finally warm enough for my hands, I made the short ride to Luther Pass, then locked my bike to a tree to hike up Waterhouse. I found no use trail, but there was little underbrush, and neither the fresh nor old snow posed much of a problem. I took in the view south from the summit rocks, then returned to my bike and continued west. 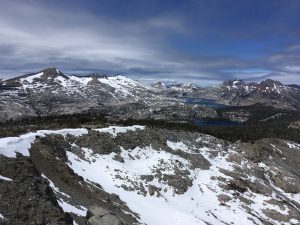 It was a weekend, so I wanted to avoid the highways as much as possible, especially 50, with its traffic from Sacramento and the Bay. For my first dodge, I went through the closed Luther campground, cutting off a bit of 89. I crossed the highway, then took off again down Upper Truckee Road, which starts as steep single-lane pavement, then becomes a quiet residential street. I had hoped to take the Hawley Grade National Historic Trail — “grade” seemed to imply “railroad” and therefore “gentle” — but it was nasty and rocky. Instead, I found the Old Meyers Grade and Johnson Pass roads, thus avoiding the highway climb to Echo Summit. From there, unfortunately, it was pure highway to the Mount Ralston trailhead, with constant traffic boding ill for the uphill return.

I semi-hid my bike near the Ralston trailhead, then took off at a determined walk. This turned out to be a deservedly popular but not overly long hike, with excellent views of Lake Aloha and the Desolation Wilderness from the summit. I took around an hour from trailhead to summit, a respectable time, though far off the course record. The Desolation peaks were still snowy, but Lake Aloha had melted out; on my last visit earlier in the season, I had walked across it to save time while tagging the other peaks. I spent a couple of minutes on the cold summit, then ran back to my bike and retraced my route. The ride up 50 was as miserable as expected, but I’m turning into a roadie again, and getting used to close and constant traffic. The rest of the ride was much more pleasant, and I returned to the car mid-afternoon, satisfied with a full day.

2 responses to “Verdi and Tahoe”