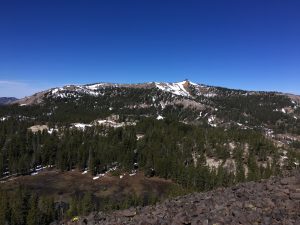 After a lengthy and clarifying stay in the Owens Valley, it was time to move on. On the way to visit a friend near Lake Tahoe, I took a side trip over Sonora Pass to tag Disaster, the northernmost of my fifteen remaining SPS peaks. I had been stymied on previous trips by pass closures and weather, but this time had no trouble reaching Iceberg Meadow. Since Disaster by itself would be very short, I roughly followed Rob Houghton’s route to tag a couple of minor neighbors. It was still little more than a half-day, but that was enough given the remaining drive.

Used to waking up low on the desert east side of the Sierra, I set an unrealistic 5:00 AM alarm. When it went off a couple of thousand feet higher on the shady side of the range, I was curled up in my sleeping bag for warmth. I reached an arm out several times to hit “snooze,” eventually making a hot breakfast and getting started toward 7:00 AM. I hiked up the shaded Disaster Creek trail in all my layers, my hands aching inside my gloves. Even down at 8000 feet there was a bit of fresh graupel on the ground from the night before. 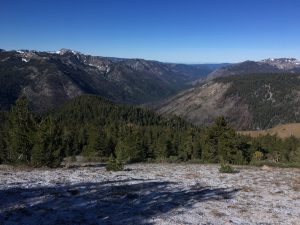 The route to Disaster follows the trail past the cliffy part of the Iceberg, then leaves it to ascend a steep hillside to the peak’s long south ridge. This would have been a miserable bushwhack some years ago, but a convenient fire had trimmed the manzanita, and deer had created some faint paths. The underlying dirt is the expected decomposed granite, but much more pleasant than the loose sand I had dealt with on the way to Sawmill Point a few days before. I made steady progress to the ridge, where I finally reached both direct sun and a cold west wind. 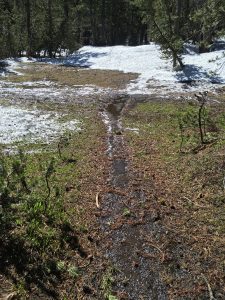 Most of the rest of the route up Disaster was a gentle hike through open forest and meadows, with decent shelter from the wind. The summit itself was less pleasant, a loose pile of basalt talus, dusted with fresh snow, offering scant shelter. I briefly looked around for a register, then found a semi-sheltered spot to cram down a couple sandwiches with aching hands. I thought of returning to the car, but that would have been lame. Instead, I retraced my steps a short distance down the ridge, then dropped east through the woods to the PCT. 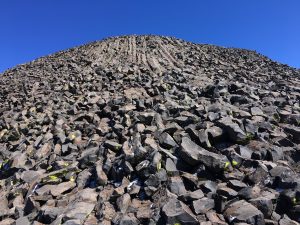 Conditions became more pleasant off of Disaster’s exposed ridge. While there was still patchy snow in the woods, the cold worked to my advantage, keeping it pleasantly firm for the rest of my outing. A few people had hiked this section in recent, warmer weather, so I did not have to consult my map to follow the trail. The next bump, Peak 9501′, was a larger and looser pile of basalt than Disaster. I carefully picked my way up the near side, then descended a vague ridge of columnar basalt down the far one to regain the trail. 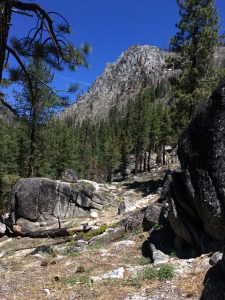 As is often the case, the PCT wanders pointlessly in this section, so I shortcut one inexplicable loop on my way toward Boulder, then left it to follow a drainage between two ridges, ending near the summit. I briefly took in the view of the higher, snowier peaks to the south, then took off straight down to the PCT in the direction of a creek leading to Boulder Lake.

This drainage started out as easy, runnable cross-country, then turned obnoxiously brushy as it dropped and steepened. I sidehilled along to the left, and eventually picked up the steep and unmaintained Boulder Lake trail. The Clark Fork trail was gentler and much better maintained, allowing me to do something like running in the final few miles to the trailhead. I rinsed off in the frigid creek, then drove back over the pass to cook lunch before finishing up the drive, with one stop at a Walmart featuring a surprising number of people not wearing masks. Sigh…

Higher peaks to the south