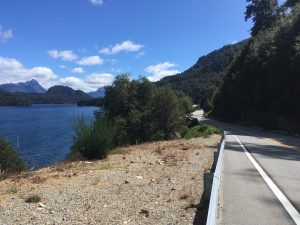 With my trip nearing its end, I was not sure where I wanted to go after Pucon. One option would be to make a loop north to Llaima and Sierra Nevada, taking a scenic back road through araucaria forests. This would take 4-5 days, after which I could return to the Panamericana and catch the bus from Temuco. Another would be to head south through the Siete Lagos region, crossing over to Argentina via the Paso Hue Hum to San Martin de los Andes, then back to Chile via Paso Cardenal Samoré to Osorno. The road south of San Martin is supposed to be one of the best short bike tours in Argentina, and if I made good time, I would even have time to see Bariloche. I was getting tired of volcanoes, so I chose the latter, pushing back my return flight to give myself some time to explore the Bariloche area’s supposedly better rock. 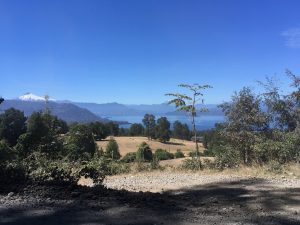 It felt good to be on Chilean asphalt as I rode around the south side of Lago Villarrica, but I quickly tired of the concomitant traffic. This continued after I turned south at the city of Villarrica, so I gambled on a side road supposedly containing two short stretches of dirt. The paved sections were glorious and almost car-free, and I enjoyed tooling south in no particular hurry. The dirt was another matter: while it was not as washboarded as the Argentinian stuff, it was loose in places, and steep enough that I crashed once going downhill before learning that I had to walk my bike down the steeper sections. 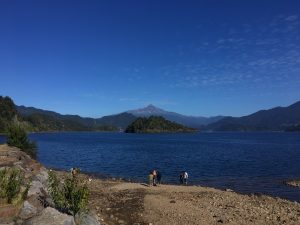 I was planning to camp in Neltume or Puerto Fuy, but I made slower progress than expected on the rolling road, and instead stopped at a nice camp-spot by a river next to Lago Panguipulli. The water looked clean, with no upstream lakes or settlements, there were blackberries all around, and I would sleep better at an undeveloped campsite, undisturbed by lights and neighbors. I took my time the next morning, reaching the ferry across Lago Pirihueico around lunch. The lake, around ten miles long with steep wooded hills rising directly from its shores, reminded me somewhat of Lake Chelan in the Cascades, where I had taken the ferry to Holden to climb Bonanza and Fernow. 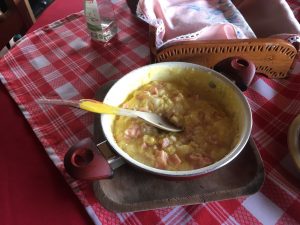 I noticed a female cyclist as I bought my ticket, but did not disturb her, instead heading over to an eatery by the lake for lunch. It cost more than I would normally pay — about $5-6 — but the scrambled eggs with ham and cheese and fresh bread were a nice change from my normal diet of polenta and Mantecol. The lake is only at about 2000 feet, so it sees little snow in the winter, but nearby Volcan Choshuenco is home to a significant glacier on its east side, clearly visible from town. 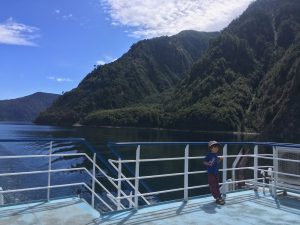 I looked for the cyclist while we lined up to board the ferry, and found that she was traveling with her partner and two children, now aged four and six. They were nearing the end of a three-year journey from Fairbanks to Ushwaya, which they have written about on their excellent website (sorry, only in French and German). They were both carrying full panniers, and Daniel was also pulling a two-wheeled child trailer. His rig was unimaginably heavy, apparently weighing something like 200kg including him and the kids. We talked all the way across the ferry, while the kids ate and bounced around the boat. Marilyne is French, Daniel German, and the kids were barely speaking age when the journey started, so they already spoke at least three languages, and perhaps four, though I did not hear any English from their time passing through the States and Canada. Both were friendly, but while Daniel was somewhat quiet, Marilyne was surprisingly voluble, doing most of the talking on the ride.

They were understandably slow, so I left them on the other side of the ferry, foolishly hoping to make it to asphalt in San Marcos de los Andes by evening. However, the road was classic Argentinian ripio, and the rolling hills slowed me to a crawl. Worse, I was having to stop every couple of miles to detach the trailer and re-tighten my rear quick release. I had had this problem occasionally on rough roads earlier in the trip, but it seems to be getting worse. I am otherwise happy with my trailer, but because of this problem I will probably switch to panniers for any future tours.

I saw a potential camp-spot next to Lago Lacar on the map, and was dismayed to find that it was a popular and clearly-signed day use area with a park ranger. As the sun sank, I slogged up a climb away from the lake, camping in the first open spot next to the road large enough to hold my tent. I continued to San Martin the next day over more rocks and washboard, regularly stopping to fix my quick release. They were grading the road near town, but even the freshly-graded part was not great, and they apparently did not intend to roll it after grading, so it would soon return to its miserable state. 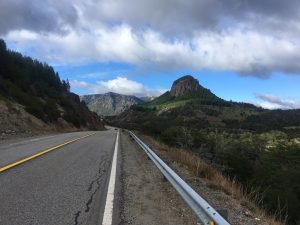 I hung out at a gas station for awhile, using their internet to catch up with the world and try to plan my summer, then knocked out most of the climb out of town. There appeared to be several organized campgrounds between San Martin and Villa la Angostura, but there was plenty of water and wild camping, so I found a good spot with a fire ring and log to sit on, and had a nice, quiet evening. 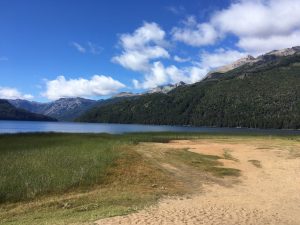 My head-start made for another short day to Angostura, along one of the best stretches of cycling on my trip. The road between San Martin and Bariloche passes many large lakes, with gently rolling forest between them and low peaks farther off. For once the mountains looked as mountains should, with lakes at their base, then trees, then grass and rocks above treeline. I encountered numerous cyclists along the way, a couple of whom were even pulling Bob trailers, the first I had seen on my trip. I did more internet-ing in Angostura — planning a trip on one continent and organizing a fundraiser on a second, while traveling on a third is hard enough without a pandemic — then paid too much to stay at the neighboring campground. Angostura and Bariloche are quite touristic, with Chileans visiting from over the pass, and prices are accordingly high. 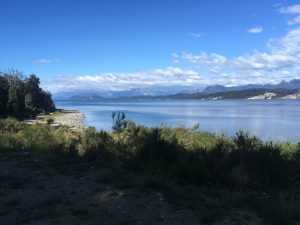 The final ride to Bariloche was fifty easy miles around the huge Lago Nahuel Huapi, the first 35 or so with a wicked tailwind. I started late and stopped often to take pictures or admire the view, and still made it to Bariloche by mid-afternoon. The last part of the ride, from the intersection with route 237 to town, was made somewhat unpleasant by traffic coming from the city of Neuquen, and the town was far too large and busy for my taste. However, I could see the storm approaching over Cerro Cathedral to the west, and it was forecast to rain the next day, so it would be home for a little while. I found the closest campground to town, and once again paid too much to sleep.