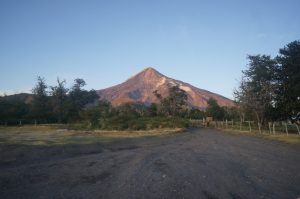 I got a reasonably early start around 7:30, both because Lanin is a decent-sized climb from the campground, and because the office would still be closed, so there would be little chance of a ranger seeing me out the window. The route starts out as a dirt road, much better than most I had been riding, then turns into a footpath. Along the way, there are various signs identifying the trail-side plants, and one listing the long list of required equipment to scale this dangerous summit. I had perhaps one of the required things, but I could also see from camp that the entire route was dry. I had turned on Strava for the first time in awhile, so while I did not go all-out for speed, I did jog a few parts of the path, and tried to maintain a reasonable effort. 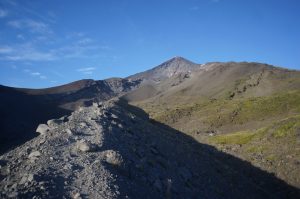 After crossing the flats to the peak’s base, the route climbs an old lateral moraine called the “fish spine,” then switchbacks up toward the first refugio. The loose, sharp volcanic talus would be a nightmare to climb in its original state, but fortunately there is a good path, with the occasional sign or painted arrow to keep people on course. The refugio was more developed than I had expected, with several semi-permanent tents in addition to the orange building described in the guidebook. I did not see anyone outside, but tried to pass quickly, discreetly, and at a bit of a distance. 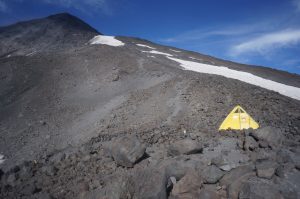 I had expected distinct up- and down-trails, but there seemed to be just one general confusion of paths, none of which was particularly well-suited to travel in either direction. I passed the higher yellow hut, seemingly unused, then crossed a talus slope to reach some solid rock. It was the first such I had touched in a long time, and it felt good to do a bit of Colorado class 3 scrambling on the final climb. I passed two other groups on their way down, and was impressed that they managed not to knock loose rocks on me. 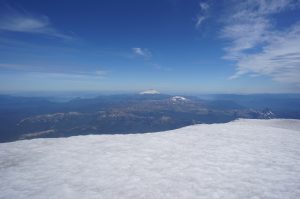 The summit is a small, partly glacier-filled crater, with the highest point being somewhere in the crunchy ice on the far side. I easily walked over in my running shoes, taking care not to try to wedge a leg in a small crevasse crossing this bit of glacier. I took a look down the more glaciated south side, then tried to identify the surrounding volcanoes. Villarrica and Quetrupillan, along my intended route to the northwest, were closest and easiest to identify. Llaima is a high, sharp point farther north. The ones farther south were harder to pick out, both because of distance and because I was looking at their less-glaciated northern sides. 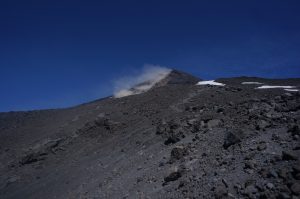 I finished off my Mantecol in a sheltered spot, then took off back down the rock rib, walking quickly down the steep, sticky surface. I carefully avoided kicking rocks on the group I passed, returning their favor, then took a much quicker line down the scree to the right of the ridge, rejoining the trails where they crossed toward the yellow hut. I passed another group just above the lower refugio, then acted casual as I walked through camp. A ranger waved at me, and I waved back in a friendly way, kept my headphones in, and kept moving. I passed an army party on the trail below, resting and sweating in their fatigues and clunky boots, then found a nice down-path bypassing most of the switchbacks. 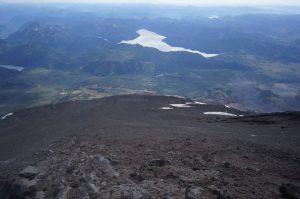 Since it was hot out and I was wearing my mountaineering pack, I did not feel much like running the lower trail, but I occasionally jogged a bit out of boredom. I saw a ranger truck where the trail crosses the road, and waved to the owner as I passed. He seemed a bit more interested in talking to me than the previous one, though, and I saw another ranger ahead on the trail, possibly trying to prevent my escape. Had someone reported me? What kind of trouble would I face?

Clearly someone had turned me in — probably the ranger at the refugio — and they both had me dead to rights, and had gone to a remarkable amount of effort to hunt down a single rogue hiker. I told him I had only gone for a little hike up to the refugio, but he probably knew I was full of it, and in any case, no one is allowed above the flats without the required equipment, or at least without an arbitrary subset consisting of at least boots and a radio. I had seen people near the summit without the supposedly-also-required ice axes, with boots no better on any surface than my trail runners, but… rules are rules.

He made it clear that he was giving me a citation rather than a fine, then spent a long time filling in a form detailing my crimes. He unfortunately had forgotten to insert the carbon paper between two sheets, so he had to recopy most of it before finishing via carbon. He signed it, had me sign it, and then, for some reason, had two random passing tourists sign as witnesses after he explained to them that I was a criminal. Then we each took a copy and went our separate ways. It was a strange experience, but pleasant and effective as far as encounters with law enforcement go: there were no guns or threats, no extortionate fines, and I left feeling more ashamed than resentful. I still believe the rules for Lanin are utterly pointless, but would be more likely to follow them in the future. Not wanting to pay for the useless campground or see the rangers again, I packed up and made my way through customs, then passed a couple of lakes before finding a spot to camp on a side-road on the wet Chilean side of the mountains.