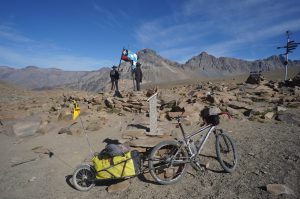 This is probably one of the most obscure “roads” between Argentina and Chile, crossing the Andes from Termas del Flaco to Las Leñas. I believe it is at least occasionally driven, and I saw a bike track here and there, but it sees far more goats than people, and is a seriously rugged endeavor. Though it is only 22 straight-line miles from where I camped at the Rio de las Damas to the ski resort at Las Leñas, and only a thousand-foot climb to the pass, the eastern side of the Andes has a high fractal dimension, so the actual road is 37 miles and several thousand feet of climbing. It also requires several river crossings ranging from calf- to thigh-deep. Crossing from Termas del Flaco to Las Leñas takes two full days by bike, while crossing between the closest major towns of San Fernando and Malargüe takes more like four. 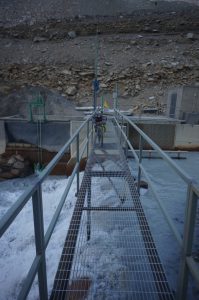 I packed up, shuttled my bike across the footbridge in three pieces, then rode back down-valley on the correct side of the river to the base of the pass’s switchbacks. I knew they were steep, so I expected to mostly push my bike, but I did not realize just how steep they were, or how loose. Since the Chilean side of the pass is used mostly by goats, it is churned by hooves rather than packed by wheels. It took me something like three hours to cover the three kilometers to the pass, and I often had to plant my feet, push the bike forward a yard, then lock both brakes to hold it still while I stepped forward to plant my feet again. The goat-herds passed me on their horses and just sort of shook their heads. Gringo loco… 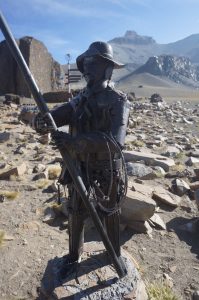 Given the pass’s evident disuse, I was surprised to find several monuments on top, including two metal statue-men holding Argentinian and Chilean flags. The Chilean man looked like a fairly normal vaquero, but the Argentinian one was more like some kind of creepy mech-soldier, with a fearsome expression and gears showing beneath his poncho. I rewarded myself with a snack under his creepy gaze, then waved goodbye to Chile and headed out down the unknown descent into Argentina. 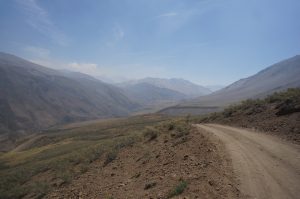 It started out easy, with a gradual rolling descent to the Arroyo del Perdido, mostly rideable with only a few sandy parts. Though the road still appeared to be used mostly by livestock, there were some old truck tracks and an occasional bit of bicycle track, which was encouraging. There were several river crossings, of both the Perdido and its side-streams, but I was becoming hardened to such things. I simply pushed my bike and trailer across, stopped to wring out my shoes and socks, then continued on my way. Most were knee-deep, though one had a thigh-deep section that floated my bike and trailer.

After a few hours of cows and horses, I passed some ranchers having lunch by their truck, the first humans I had seen on this side of the pass. They and a couple of motorcycle tourists were the only people I saw until I reached the main road along the Rio las Leñas. I had hoped for a steady, gentle descent, but the road climbs about 600 feet out of the Arroyo del Perdido, then another 1400 feet out of the Arroyo del Burro. Fortunately these climbs were much less severe than the one to the pass, and I was able to ride most of them, but they still added unexpected time and effort to my day. 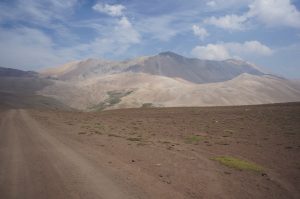 I finally reached the main road behind the impressive Cerro Torrecillas, but while there was a bit more traffic, the road surface was little better. Most of the 2,000-foot descent to Las Leñas was steep, rough dirt, and little fun to ride, though I suppose braking was good exercise for my forearms. When I finally reached pavement just outside Las Leñas, I actually stopped to kiss it. The resort was mostly closed for the summer, but I located a minimal grocery store that had eggs and fresh vegetables, then rode out of town a short distance to camp in a gravel pit away from the highway. 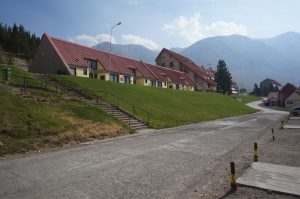 The next day, I headed on down the valley to Ruta 40, then turned south for Malargüe. It felt good to be back in Argentina, where there was less traffic even on a main road like 40 than on some Chilean side-roads, and where many drivers would honk and wave encouragingly as they passed. I had hoped to immediately head north on a side-trip to Cerro Sosneado, but I was low on food, and had broken two more nipples on my rear wheel. I needed to visit a real town before heading back into the wilderness. Malargüe turned out to be a pleasant small city, with a nice municipal campground (only $1.60 per night!), plenty of good outdoor shops, two good supermarkets, and a gas station with solid WiFi.

The guy in the bike store I visited gave me a few replacement nipples for free, and I once again went through the nuisance of installing them on a tubeless wheel. I removed the tire, taking care not to spill any of the sealant, and removed the valve stem. Then I wiped off and carefully peeled back the tubeless rim strip, which was barely sticky to begin with, and even less so after being reapplied. I screwed in the nipples, then stretched the rim strip back into place, glued the end down when it refused to stick, reinserted the valve stem, and carefully put the tire back on. Now I just needed a compressor to reseat the bead. Unfortunately the gas station air hose would not work with a Schrader adapter on a Presta valve with no pressure, so I had to wait for the end of siesta, then wander around town looking for a suitable compressor. I eventually found one at a gomeria, and was back in business with a full larder and a mostly-true wheel.

Chilean side of pass