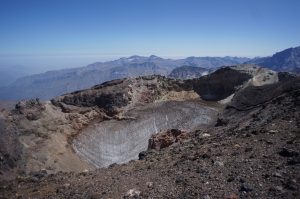 Volcan Tinguiririca is not the highest peak in its area, nor is it particularly unique, so I am not sure why it made it into Biggar’s book. However, it looked like a convenient next stop on the way south and an easy side-trip, with its base town, Termas del Flaco, a comfortable 250 kilometers from San Jose de Maipo. I figured I could front-load the commute in two days, doing 150 the first day and 100 the second, do the peak in another two, and be on my way. Little did I know…

Things started out well enough. After dealing with a bit more Chilean traffic on route G-25, I turned off on G-27 and found it to be tree-lined and much quieter. The local roadies clearly knew that this was the right way to ride the Maipo Valley, as I saw several headed in both directions. (A note on Chilean road-naming and administrative divisions note: Chile is divided into 16 regions, and the roads are named alphabetically from north to south. Santiago is in the seventh region, so nearby roads are “G” roads. However, the roads in Tierra del Fuego are “Y” roads. Why? Well, it turns out that before 1974, Chile was divided into 25 provinces, and the roads were presumably named before then. There used to be 13 regions, numbered north to south, but in 2007 they added three more, so the numbers are no longer in order. They also skip “XIII,” because bad luck. And you think Fahrenheit temperatures are weird…) 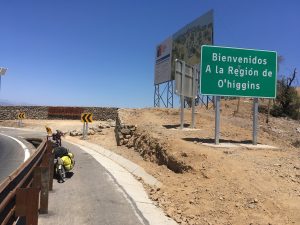 Chile would be a great country for traveling by car, as it is narrow east to west, with a single good highway, the Panamericana, stretching north to south through most of its inhabited parts. However, this highway is extremely unpleasant by bike, so one must find parallel side-roads. These can be pleasant, such as the winding foothill road I took through Chilean wine country in the O’Higgins region, but they are still more crowded than Argentinian roads. I stopped at a random empanada joint north of Rancagua and, now that I knew what to look for (al horno, not fried), got a really good one, which I ate sitting about twenty feet from said horno.

Unfortunately, the roads sometimes bottleneck at major cities, so I was forced through Rancagua. The north side was fast and easy, with a separate bike path next to the highway, but the city itself was full of traffic and one-way streets, and I had to get on the highway for about five kilometers to escape the south side. Unlike in Argentina, most towns in this part of Chile do not have city campgrounds, and there is not a lot of open space to camp. Toward the end of the day, I rode about five miles east of Rengo to a large and extremely crowded campground, with no WiFi or power. It had showers, but I was too tired to care.

I made good time to San Fernando the next day, so I stopped at a nice cafe to catch up with the rest of the world. I figured I could ride the last 70 kilometers to Termas del Flaco in a few hours. Unfortunately, the last 60 kilometers of that road are steadily uphill, dirt, and relentlessly washboarded. A man in a truck offered me a lift at about 20 kilometers in, warning that it would take eight hours to ride the rest; he wasn’t far off. I ended up camping along the Rio Tinguiririca near dusk, then riding the rest of the way in the morning. 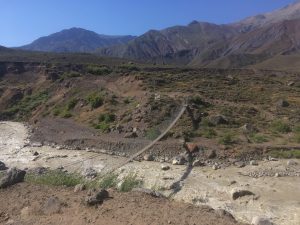 Termas del Flaco is a popular tourist town with numerous campgrounds and stores, but I had just shopped at the Totus in San Fernando, and still had plenty of daylight left, so I decided to put in some of the miles toward the Rio de las Damas. The glacial Rio Tinguiririca is too big to cross, especially in the afternoon. There is a vehicle bridge several miles short of town, but rather than suffering through the washboard again, I asked around town and was eventually pointed to a much closer footbridge. This turned out to be a shoulder-wide suspension bridge made of cables and what looked like spare lumber, more tacked together than engineered. I wrestled my bike down the steep cowpath to the bridge, then had to take the bike, trailer, and bag across in three separate, swaying trips. I ended up in someone’s yard on the other side, and the owner, who had been watching my cursing progress the whole time, pointed me to another cowpath leading back to the road. Finally on the correct side of the river, I put in a few more miles, then found a flat place to camp. I scrolled around the map a bit before I went to sleep, and discovered that my road led back into Argentina via the Paso de las Damas. I had put in a lot of work to reach this point, and was sick of Chilean traffic, so it seemed tempting. 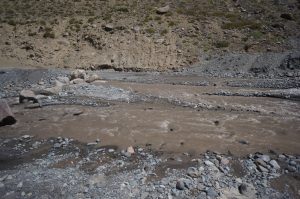 There is some sort of hydroelectric project in the upper Tinguiririca valley, so the road is kept in good shape, yet sees little enough traffic that it is not washboarded. However it is steep, and includes one unlit tunnel, so I had a slow climb. It does not exactly correspond to any map I saw, as it crosses back to the north side of the river on a large culvert, then stays there up to the Rio de las Damas. The road builders had gotten lazy after the first culvert, so I had to cross one calf-deep side-stream along the way. I was new to the fording-with-bike game, so I stupidly tried to hop across with my bike while staying dry, then ended up fording the thing four times (two round-trips) to carry my trailer and bag over, each time putting some of the heavy stuff in the bag into my backpack to make it light enough for the final trip. 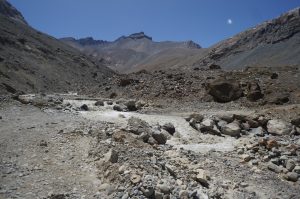 Not gonna cross that

I finally reached the base of the Paso de las Damas, but it was on the other side of the river, and the vehicle ford was way too fast and deep to be safe at this time of day. Frustrated, I continued up the road’s left fork, where I was rewarded by (1) a flat spot next to the river to camp, and (2) a footbridge associated with some sort of river monitoring dam. It was only early afternoon, but it would be more efficient to camp two nights at my bike than to backpack a few miles up-valley, so I called it a day. 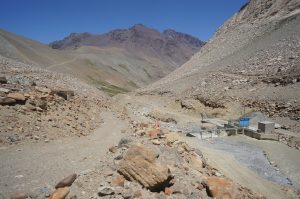 It seemed like a quiet, dead-end spot, but I had a surprising number of visitors. First, the two owners of the hundred or so goats I had seen came by on the other side of the river, tying their horses to the local excavator before crossing the bridge to chat. I envied their horses, which were a help rather than a hindrance in crossing the area’s rivers. Later, right as I was about to eat dinner, an official-looking truck drove up. Oh, crap… Fortunately this is South America, so while one guy crossed the bridge to the excavator, the other just told me I had to move my tent a bit because la machina would be coming through. 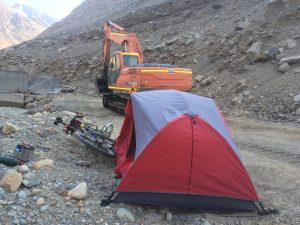 I had been listening to the rocks rolling beneath the river, and evidently it was time for one of the dam’s regular cleanings (hence the permanently-stationed excavator). It was impressive to watch: the guy drove the tracked vehicle straight into the river, then rapidly slung bucket after bucket of rocks and gravel out onto the bank, tipping the bucket slightly to empty out the water beforehand. He was clearly good at his job. Once enough rocks had been removed this way, he drove up onto the bank to pull out more from another spot. Finally he crossed the river, driving through my campsite a few feet from my recently-moved tent, and emptied sand out of some kind of catch, adding it to one of the nearby piles. Finally, around dusk, he parked la machina on the other side of the river and they left. Hoping this was not a daily occurrence, I moved my tent back in place and went to sleep. 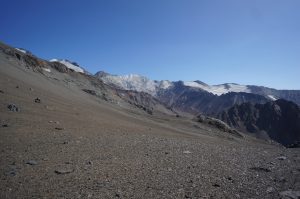 It was well past time to climb another peak. Since the Peakbagger app’s offline maps have stopped working, I had only a rough map of the area, and Tinguiririca is a large, complex thing whose summit is hidden from the surrounding valleys, but I had an adequate route description, and did not expect a mound-y volcano to give me any trouble. I boulder-hopped up to a flat plain on the Rio de las Damas, then took off up a side-valley toward where I thought the summit should be. I was feeling slower than expected for the altitude, but it was good to be off the bike for a change. While I had seen bits of faint trail and horse manure in the valley, there were no human signs farther up. 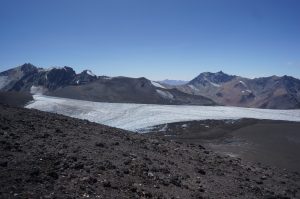 I eventually reached a broad choss-ridge, which I followed to the summit plateau, passing a couple of small cliff bands to one side or the other. Tinguiririca’s summit is a vast plateau with a large, flat glacier surrounded by several bumps. Fortunately I had enough of a map to tell me which was the highest, because it is impossible to tell from below, and all of them are miserable piles of loose scree. The glacier was the expected penitente mess, but I was used to that, and its surface was gritty enough that I crossed easily in trail runners. I had a bit more trouble crossing the messed-up glacial remnant at the base of the summit, and no fun at all on the steep, loose stuff above, but it proved worth the effort. 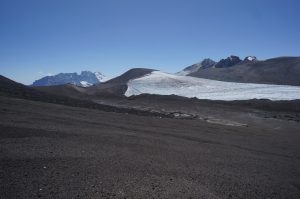 Tinguiririca’s current crater is northwest of the summit, and filled with penitentes. From a highpoint near the north end of the summit plateau, the large glacier drains to the south. Though it is mostly just a colorful mound, it is surrounded by more precipitous peaks, including the higher Cerro Seler to the northwest, and (I think) the Torres del Brujo to the north. I looked them up online later, and found that they are where Real Men go to climb when they visit the area. Weirdly for the Andes, they are made of good granite instead of volcanic choss. Unfortunately, I do not know whether they have any routes that I could climb.

Summit gawping complete, I retraced my route, reaching my tent in the late afternoon and happily not finding it crushed by la machina. I decided to head over the pass in the morning, then watched the sunset and settled in for the night.

Not gonna cross that