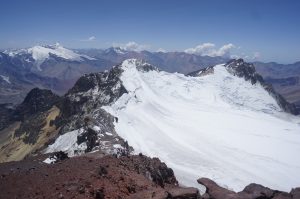 Rather than spending about a week riding from Copiapo back to Santiago, I used that week’s food money (about $35) on an overnight sleeper bus. I was afraid that it would be a problem to take a bike, trailer, and dry-bag, but it turns out that they all fit in the bus’s cargo hold with room to spare. I had to pay another 10,000 pesos ($13) in cash to the bus’s baggage handler, a fee which he announced long after the bus had started moving. I could not tell if this was a standard 5000 pesos for each additional item, or just a bribe, but the whole thing still probably cost about what it would have to ride the distance. Like in Peru, and unlike in the States, more than just poor people take the bus, so it was much more clean and comfortable than coach on an airplane, and I got a good night’s sleep.

I woke near Santiago’s outskirts, watching the sun rise over the high Andes, and illuminate a Walmart (a.k.a. “Lider”) with a built-in McDonalds (a.k.a. “McDonalds”). Ah, welcome back to Chile… sorry for inflicting Milton Friedman upon you at gunpoint. I spent a couple of nights at a cheaper, more amateur hostel than last time, resupplied with big-city stuff (e.g. white gas, spare tire, Walmart food), then took off for the Maipo Valley, where I hoped to use my lingering acclimatization to tag some high peaks. Accustomed to Argentina’s sparsity, I packed a week of food, quickly realizing that this was completely unnecessary in dense Chile.

With a late start, I spent most of the morning escaping Santiago. I had hoped that the road up the Maipo would be pleasant and quiet, but it was instead crowded with vacation traffic, as the area is a playground for nearby, wealthy Santiago. After so much quiet riding in rural Argentina and the Puna de Atacama, I found that I had developed a strong dislike for traffic. Things fortunately got much quieter once I turned onto the side road up the Rio Colorado toward Tupungato. I hoped that I would be able to ride to base camp that day, but unfortunately the man guarding the gate was insistent that I needed written permission (from Difrol, which I sort of knew to be the case) and, in any case, bikes were not allowed. Annoyed at having wasted so much time and effort climbing the valley, I turned back to continue up the Maipo. The descent was slow with a full trailer, and even slower because I had to repeatedly stop and pump up my slowly-leaking rear tire. Ugh.

Limping into San Jose de Maipo, I decided to call it a day. This being a Chilean tourist town, the campground cost about $9, and offered no power outlets, crappy picnic tables, and no hot water. To compensate for this highway robbery, I met a German bike tourist named Jürgen, who spoke good English and had cycled extensively in Southeast Asia. Among other things, I learned that the Chilean coast near Santiago is actually pleasant. I had been avoiding it, assuming it was a desert hellscape like the Peruvian cost near Lima, but it might offer a viable north-south route on a future trip. 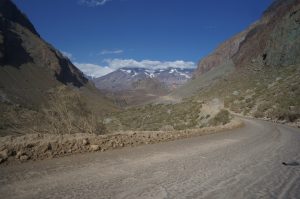 I continued up-valley late the next morning, thinking it would not take long to reach the end of the road past. The road is now paved all the way to Baños Morales, so most of the climb went easily. Unfortunately, the remaining climb to the Marmolejo trailhead at El Cabrerio is bumpy dirt, 1.5 lanes wide, crowded with large mining trucks, and averages a 10% grade. With a full trailer, I ended up pushing my bike most of the time, seething a bit each time a deafeningly-loud truck passed. I located the trail, then found a nice campsite a bit farther up the valley and filtered some silty water for dinner. I was about to set up my tent when a mine truck pulled up next to me, and the driver told me I had to move because they would be blasting soon.

I found a safe spot to watch the blast equidistant between the two goat pens, noting that the debris came nowhere close to where I had wanted to camp. The miners drove by again to tell me it was all clear, but I had already set up my tent by then, and it didn’t smell too badly of goat, so I stayed where I was. The goat-herds left me alone, but one of their dogs peed on my tent the next morning while I was eating breakfast. Joy. I loaded up my pack with tent, crampons, boots, ice axe, and several days’ food, hid my bike in the rocks, and took off up the maze of goat trails. Having biked to 7,750′, I hoped to climb the remaining 12,300′ in three days round-trip. 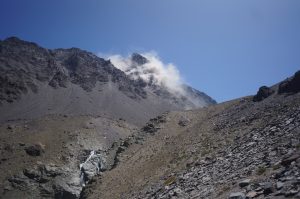 The trails are easy to follow up to the Estero la Engorda, a field of spiny plants where the goats disperse and feed. I did not want to wade across the Estero Colina, so I stayed to the right on the way up, hoping to find a place to hop across in broad, boulder-strewn mess leading up to a headwall. However, the stream always remained just a bit too wide and fierce, and the going got worse as the valley steepened. I knew I would ultimately want to be on this side of the stream higher up, but the terrain remained loose and miserable, and I saw a well-defined trail on the other side. I eventually found a sketchy crossing that involved a jump and one wet foot, but it was worth it to have a trail again. Along the way, I watched a massive rockslide on one of the unnamed peaks left of the stream. Maybe in another ten million years, the Andes will be less chossy. 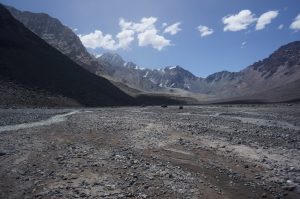 The trail crosses the stream again at another flat area around 11,000′, where there are some campsites. I managed to cross most of the braided channels with dry feet, but could not find a way to avoid wading the last. It was barely calf-deep and no more than twenty feet wide, but I waded it in shoes and socks, then wrung them out on the other side. Experience has taught me that this is the best way to cross mountain streams, in terms of both safety and speed. Crossing barefoot is less secure and much slower (i.e. colder), and it takes only slightly longer to wring out socks and insoles than it does to take off shoes and put them back on. Hiking in wet shoes is slightly cold and harder on the feet, but this part of the Andes is arid enough for shoes and socks to dry overnight. 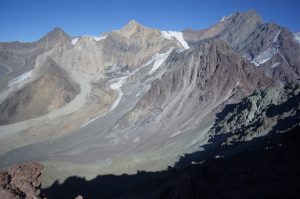 While many people camp here, I needed to at least reach the camping area around 14,000′ on Marmolejo’s northwest ridge if I wanted to summit the next day. The trail disappeared again in the miserable boulder-field above the Estero Colina, but I could see it clearly to the right of the valley’s head, climbing steeply to the saddle with Cerro Cortaderas. Incredibly, I found a camping table and signs of a mule camp at the base of the steep part; who knew mules were so good on talus fields? The steep part of the climb was agonizingly slow with my heavy pack, and cold once I reached the ridge and was no longer sheltered from the wind. I reached the camping area late in the day, finding a couple of stashed backpacks and a dozen or so rock barriers scattered around a flat area. There was no nearby water or snow to melt, but fortunately I had hauled enough water for dinner and breakfast from the Estero Colina. I set up my tent with stiff hands, cooked glop, and set my alarm for a reasonably alpine start. 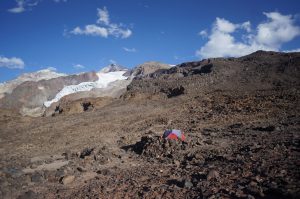 I started hiking the next day just after headlamp time, making my way up the broad talus ridge that is the peak’s only weakness. I found a bit of a trail near the glacier, and broke the ice on a nearby puddle with my boot to get some water. The trail continued to a (better) camp near the glacier, where I found an orange mountaineering tent. The glacier is much smaller now than it appears on maps, and no longer continuous, so the climb is a mix of snow/ice and sand. This being the high Andes, its surface is mostly hellish penitentes, up to head-high in places, so it is best to stick to the sand where possible. I wove through the spines on the flat lower glacier, finding some fresh crampon tracks as I aimed for what looked like the least-spiky part and the shortest path back to dry ground. 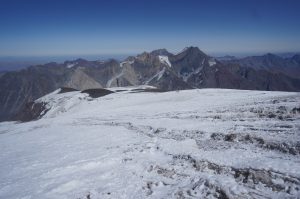 After hiking up more sand, one has to cross the larger, upper part of the glacier, where the penitentes are slightly smaller, but there are numerous significant crevasses. I took a line crossing below most of them, hopped some, found penitente bridges over others, then wove through more spikes to reach the upper volcano slog. There were a few patches of fresh snow, but it was mostly bare, and I found a bit of a trail. Still, it was the usual slow going at altitude, and the wind was intense. Near the summit, I met the other group on their way down, taking a slightly different line. I had a brief, shouted conversation with one of them, neither of us conveying much information, then continued up the final slog. 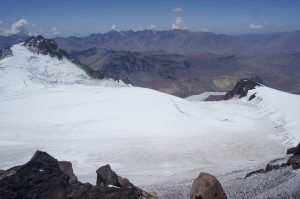 The southeast side of the the summit is more impressive, with colorful and chossy cliffs dropping to a large glacier. However, the wind was intense enough to discourage me from spending much time. I took the necessary photos, then quickly retreated, catching up to the other group near the upper glacier. While they wandered far to the left for some reason, I chose a higher line, hoping to pass above most of the crevasses and avoid some penitentes. Neither thing happened: I ended up crossing at least as many crevasses, and the penitentes were at least as large and numerous.

I reached my camp with enough time to pack up and move down to 11,000′, but had no reason to do so, and figured that staying another night higher would help me keep my acclimatization for peaks to come. I watched the sunset from my tent, then packed up and hiked down to my bike the next day. I was fairly certain that the mine road headed north from El Cabrerio led to the Estero Morado, my next goal, and I had enough food, but I wanted to eat something fresh for a change, so I dropped down to Baños Morales for the night, gritting my teeth at having to repeat the bike-pushing climb the next morning. I talked to a climber couple up from Santiago for the weekend, who assured me that yes, there is rock solid enough to climb, then found some eggs and a sad onion to add to my polenta for dinner.

Looking down at La Engorda