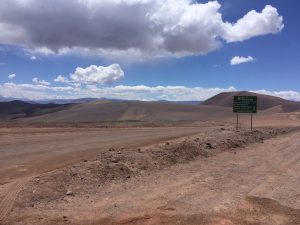 I had skipped writing about my descent from the Atacama, but there are some things I would like to remember, which will hopefully be of interest to the reader. I woke up relatively early in the Orange House, and was on the road as soon as it was warm enough for my hands to handle riding downhill. It was about forty kilometers to Chilean customs at Maricunga, and I made great time on the smooth asphalt, both descending to the Salar and heading north along the salt flat. The descent follows the Rio Lamas, which briefly emerges to produce a couple of waterfalls before spending its precious fluids in the salt flat. I am not sure if the river is easy to reach at this point, or if its contents are usably low in salt and other minerals, but this would be worth studying before returning to the Puna. 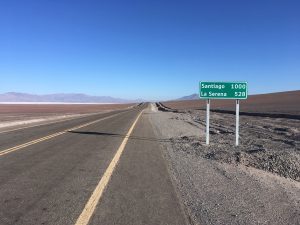 I had heard from various sources that Chilean customs were more particular than the Argentinian ones, so I was concerned that I would get into all sorts of trouble when they noticed that it had somehow taken me ten days to cover less than a hundred miles from the Argentinian guardpost just before the Paso San Francisco to the Chilean one. I pictured time in a windowless room, handcuffed to a table. However, the Aduana de Chile did not live up to its reputation. Entering the customs building, I was initially worried to find an X-ray scanner and some people waiting in line at a window. I looked around a bit, though, and noticed some hand-written signs on copier paper saying “ADUANA ➡,” leading to an office in the back. 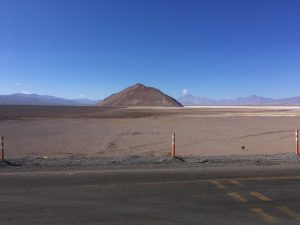 I eventually found a man sitting behind an aging Dell office computer, and stood in the hall confused until he beckoned me in. I handed him my passport, then sat down while he looked at it and rummaged in his desk for the necessary forms. The tinny little speakers connected to his computer were blasting some of the most generic possible techno, whose generic techno woman was repeating “don’t want no small… dick… man” ad nauseam. I succeeded in not completely losing it, but the officer might have noticed that something was amiss, since he did at least turn down the volume. I filled out one form saying I was entering via Maricunga from Fiambala, another declaring that I was riding a gray Specialized bicycle, and I was almost free to go. A man intercepted me on my way out, and rummaged through my bags a bit. He had no problem with the few remaining calories brought from Fiambala, or with the tortillas and cheese given to me by Angela (which came from Chile anyways; thanks!); perhaps the dirty laundry right on top encouraged him to hurry.

With that, I was almost on my way; all that remained was to find water. The bathroom sinks were turned off, and some guy pointed me around the corner when I asked inside. I did not find an obvious spigot, but I did see a giant plastic water tank, which I assumed was potable. I looked around to make sure no one was watching, then dipped my water bottles. I had covered 40 kilometers in not much time, and still had well over 3000 meters to lose in the next 160. How bad could it be…? 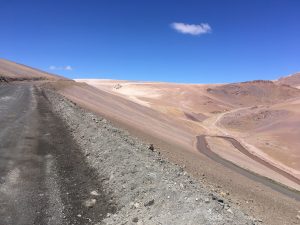 Well, for starters the pavement ended a few hundred yards past the border post, where the road turns left to cross the north end of the Salar. It was good, treated dirt, not the washboard stuff I had experienced on my way north, but still had a noticeable effect on my speed. Second, when I had glanced at the route’s elevation profile, the enormous overall descent had drowned out what turned out to be a climb back over 14,000′ to get out of the Maricunga hole. Between the dirt, the altitude, and the uphill, this was slow going. 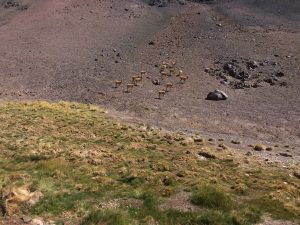 Realizing that I had probably not grabbed enough water at the border post, and unsure where I might find more, I stopped downstream of some vicuñas at a nasty little pond to filter as much as I could carry. I later found several clear-flowing springs higher up the valley, but I already had as much as I could carry. I had to stop and pant after a couple of the upper switchbacks, but eventually made it to the pass around noon, where I stopped for lunch. This consisted of several tortillas with a mixture of American cheese (ugh) and slices of a contraband Fiambala sausage I found at the bottom of my bag. I was in no real hurry, as the remaining 120 or so kilometers were all downhill, and the sun sets late in Chile at this time of year.

The dirt got much worse on the first part of the descent, a series of tight, steep switchbacks. I had packed my trailer well for downhill riding, with the tent inside and all other heavy things on bottom, but it was still slow going. I found myself riding the breaks enough that I had to stop and rest my hands a few times. I was glad I had not ridden up this side of the pass with two weeks of food, as I would have spent hours pushing my bike. Near the bottom of the steep part, where the road passes some hot springs and abandoned buildings, it gradually became paved. The pavement was not the nice, smooth, striped stuff of the Atacama, but more like asphalt that had been haphazardly pounded into the dirt.

Below the switchbacks, but still above 3500m elevation, the road enters a broad, dry wash, which it follows almost the entire way to Copiapo. Picture one of the broad washes in Death Valley or Nevada, but 80 miles long. This is when the headwind began. This was not merely a general west wind off the Pacific, which would be less directly head-on as the valley turned, but an up-valley wind that remained perfectly against me for the rest of the day. The result was that it took me around 12 hours of riding to cover 120 miles while losing 13,000 feet. 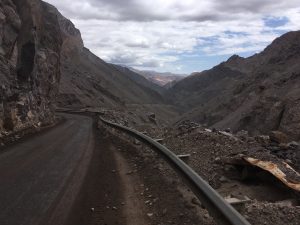 The scenery was mostly monotonous, a rocky wash between the barren ridges of desert peaks whose elevation decreased in lockstep with the valley, but there were a few exceptions. First, there was an ugly mining town high up in the valley. Farther down, I ran into what seemed like hundreds of goats crossing the road near the only water source. The mud spattering my bike from a few stream crossings was liberally mixed with fresh goat turd, which dries more slowly. I did not slow down or stop for water here, as it was one of the only stretches where I did not have a headwind. Lower still, the road went through a narrow, steep canyon, one of the few scenic parts of the descent.

I was tempted to stop in some ruined adobe buildings near the mouth of the wash, which would at least provide some shelter from the wind. However I had already consumed too much of my water to cook another dinner and breakfast, committing myself to continue to Copiapo for the night. After several more short stops to stretch and generally hate life, I finally reached the well-paved highway leading northeast from Copiapo, and with it real pavement. The headwind was still there, but I was noticeably faster.

Copiapo does not give the best first impression from this side. The road passes first some mines and ore-processing plants, then a large tin-shack slum. It was getting on towards evening at this point, and I was wrecked, so I stopped at the first convenience store I saw to get a soda and find the closest hotels. The first proved to be a small local joint, apparently closed for the night at 9:00 PM. The second was an extremely American-looking place on the main road, surrounded by fences. However, the gate opened as soon as I pushed the buzzer, and there was a guy in the office. The room was about $25 per night, an absurd price compared to my normal lodgings, but I did not care at this point. As I enjoyed my first shower in two weeks, and the first real Western one since… Santiago?… it almost seemed worth it.

2 responses to “Leaving the Puna”