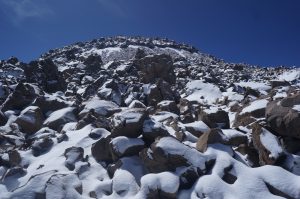 I had planned to tag Cerro Medusa, another 6000-meter peak, from my camp between Ojos and El Muerto, but did not have the energy for that much high-altitude hiking, so I decided to start late and simply take a “commute” day. I hiked back to the road and down to my bike, then wove and jostled my way down toward the refugio, where I hoped to find a barrel containing usable water. The ride over washboard and sand was not pleasant, but was far better and slightly faster than walking. As I neared the Refugio Murray, I saw a few people outside, staring curiously at me as I gradually approached, weaving between various tire tracks to find the smoothest and least sandy.

I asked about the rumored water barrel, which apparently does not exist, making the Agua Dulce the only usable water source below about 5000 meters. However, the people watching me fortunately turned out to be two Brits and their Chilean guide, just returning from a big expedition to Ojos with lots of food and water to spare. They generously shared both, and I did not have much farther to go, so I spent most of the afternoon talking to them. One of the Brits was a doctor living in Guatemala, who had the enviable job of teaching wilderness medicine courses in the world’s most interesting places. The guide, a small and lively woman from San Pedro de Atacama, had climbed all over the Andes, often carrying a pack weighing most of what she did. After plenty of good food and welcome English conversation, I left with a bit more food, including tuna and a large jar of peanut butter, a rarity outside the United States. 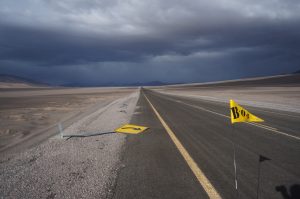 The afternoon storms had unfortunately arrived by the time I headed west down the highway, so I had to fight a headwind and intermittent rain. The numerous “single-use Chilean anemometers” (i.e. road signs) told me that yes, in fact, it was windy. Today, it was strong enough that I usually encountered the rain in sunny patches, so I was never too cold. It was nice to be back on pavement, until I noticed that my back tire was low. I really did not want to fix a flat, since that would involve putting a sealant-free tube into my tubeless tires, so I repeatedly stopped to pump up the tire, then spin it to give the sealant a chance to repair the damage. I eventually realized that the paving crew had paved right over the 1″x2″ stakes used to mark the road, which conveniently fell right on the white line. Some of these were obvious, but others protruded only a jagged and tire-destroying centimeter above the pavement. Fortunately the sealant eventually won the battle, and I limped on to the junction with the dirt road toward Tres Cruces. 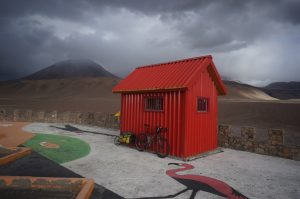 I did not look forward to spending a windy evening in my tent, so when I saw an orange building a few hundred yards farther down the road, I went to investigate. This turned out to be some sort of newly-built information kiosk, not a refugio, but clearly I was not the first person to use it as such. It was little bigger than my tent inside, but just large enough to lay out my tarp and dry my stuff, which had been soaked by my leaky water bladder. I spent a pleasant evening there, enjoying the novelty of tuna mixed with my polenta. 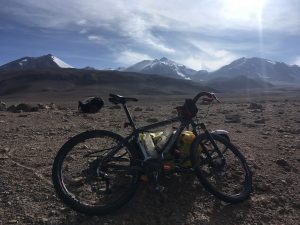 The next morning I got a reasonably early start up the Tres Cruces road. Since it sees much less traffic than the one toward Ojos, it becomes completely unridable where it enters a sandy wash. I stashed my bike behind some rocks, then took off on foot for base camp, slogging up one of several alternate “roads” — in classic Atacama fashion, people had driven wherever they felt like doing so. Nowadays the approach is drivable all the way to about 5300 meters via a road skirting south of a minor hill. From a distance, I saw another group just packing their truck and leaving, but did not feel like talking. It was only early afternoon, and the weather was good enough that I could have continued to the high camp at the 6000-meter saddle between Tres Cruces Sur and Central, but I was feeling lazy. I told myself it would be awfully cold up there, and easy enough to tag both peaks in a day with a light pack, then settled into a flat spot near the stream. 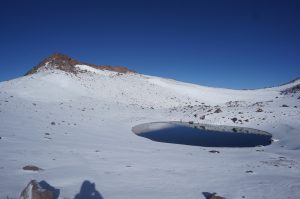 Hoping for a big day, I got a pre-dawn start, slogging up a faint path to the saddle, where there was nice camping by the promised tarn. I was feeling slower than usual, so I headed for the higher Tres Cruces Sur first. Things quickly turned unpleasant, as I lost the faint path and began side-hilling toward where I thought the route was. I eventually saw the trail again, lower down toward a broad gully leading to peak’s northwest ridge. I slid and scrabbled my way down to it, losing precious elevation, but found that it was only slightly better than the slope I had been fighting. 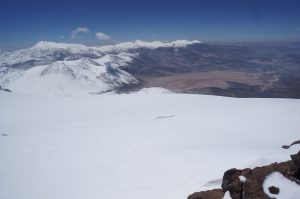 The gully eventually reached the ridge around 6450 meters; from there, the summit was only 300 meters and less than a kilometer away. However, those last thousand feet were perhaps the most miserable I have ever climbed. All of it was large, unstable talus covered in several inches of fresh snow. This kind of climbing is bad enough at 10,000 feet, and unimaginably worse at 11,000 feet higher. I finally reached the summit area with only one or two slow-motion falls, only to find a maze of volcanic pinnacles, forming endless false summits. I headed toward where I thought the true summit might be, finally topping out on one of a few similarly-high bumps on the edge of the large south glacier. If you must climb this peak, I recommend somehow ascending the glacier, which would be infinitely less immiserating. 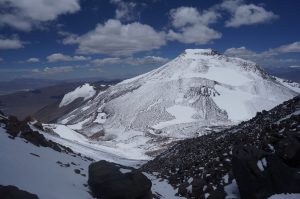 The descent was only slightly faster, though I managed to link up a few more of the patchy permanent snowfields. The “trail” sucked on the way down, being too solid to boot-ski, but too soft to walk easily. I looked up at Tres Cruces Central, a mere 1500 feet above the saddle, but I was utterly broken at this point. I lied to myself that I would come back for it the next day, then trudged back to camp. In retrospect, I might have been able to do both in a day if I had camped at the saddle, and if there were no snow, but even in perfect conditions, this route on Tres Cruces Sur would be pure misery.

Where do you need a rope?