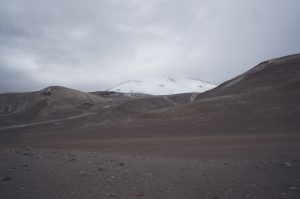 Incahuasi is a nearly 22,000-foot peak near the southeast corner of the Puna de Atacama, which supposedly had Inca ruins on its summit. Unlike natives in many parts of the Americas, the Incas climbed many of the higher peaks, including Incahuasi and Llullaillaco. They also had the unfortunate religious habit of bringing young women to summits, getting them drunk, and killing them. 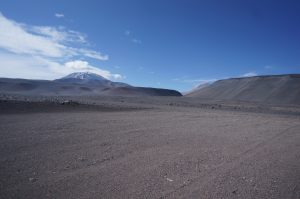 As the previous evening’s lightning show demonstrated, Incahuasi’s position and elevation mean that it receives the brunt of the region’s thunderstorms and precipitation, which tend to come from the east. Fortunately the storm had not left much snow, though it made me anxious to get an early start. While Kevin prepared to ride west through Chilean customs, I headed back east, grabbing a gallon of nasty Agua Dulce along the way, then stashed my bike a few hundred yards down the access track. The ubiquitous Hiluxes are able to drive it, but like most approach roads in the area, this one is exceptionally sandy. With so little precipitation in the valley, most of the soil is soft, and the smoothest, most drivable areas tend to be dry washes, which are even softer. 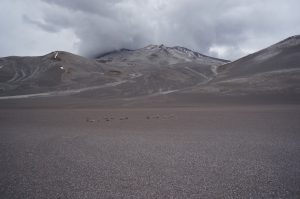 I decided it would be easier, if still tedious, to walk most of this seldom-used route. I spent the next several hours walking slightly uphill through sand, first up a wash, then along the side of an alluvial fan, finally reaching the campsite marked on my map below the Incahuasi-El Fraile saddle. The trucks now continue driving up to and beyond the saddle, but I was unlikely to find water up there, it seemed slightly more sheltered below, and I found a decent flat spot with some good anchor rocks. My “campsite” was a stark reminder of the Atacama’s hostility: not only is water hard to find, but even rocks heavy enough to tie down your tent are a valuable resource. The terrain I had crossed in the previous hours had all been sand too soft to take a stake, lacking rocks larger than gravel.

Mindful of afternoon storms, I set my alarm for 4:30, then hung around out of the wind and sun, watching the clouds form over the peaks, then expand over the valley. I eventually cooked and ate my evening glop in the tent, then slowly drifted to sleep listening to intermittent rain/hail/whatever. I dutifully woke to the alarm, noticed that it was snowing outside, and went back to sleep. I woke again at a more civilized hour, cooked breakfast, then scraped a potful of heavy snow off my tent, unsure of where I would find the day’s water. In the worst case I would have to harvest penitentes on my way back to camp, then spend the rest of the day melting them. 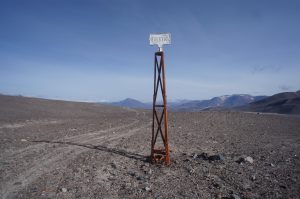 My map showed a route heading more or less straight up Incahuasi from camp, but I chose to climb to the saddle for several reasons: the truck track would be easier walking, the route from there up Incahuasi might be better-traveled, and if the weather continued to suck, I could try climbing the much lower El Fraile instead. Reaching the saddle, I found a border marker, a tent area, truck tracks continuing south to God-knows-where, and a faint bootprint leading toward the peak. I followed this around a bump on the ridge, then made my way for the broad gully leading to the near side of the crater, where I found an old truck track. This is unfortunately common in the Atacama: since most of it is a pile of sand and gravel, with no cliffs, boulders, or vegetation to get in the way, a 4WD with good tires can go almost anywhere, and many do. Fortunately people here seem not to have discovered quads; if they did, many summits would be covered in tracks. 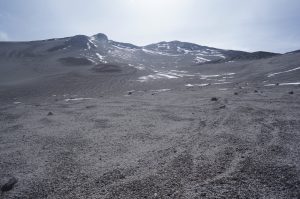 I lost the old tire tracks about 3000′ below the crater rim, and headed more or less straight uphill, since all lines seemed the same. The terrain started out okay, but slowly deteriorated. The upper peak is composed of pumice ranging between coarse sand and golf-ball-sized scree, all of it near the angle of repose, forming a mixture of loose gravel, breakable crust, and ball bearings over hardpack. Upward progress is therefore a mixture of backsliding and stumbling, frequently on all fours, all while cursing. I took a slightly side-hilling, non-ideal line, but the other options seemed almost equally unpleasant. Where possible, I tried to walk along the upper edges of snow patches, which were slightly more stable. The snow itself, unfortunately, was either too hard to kick steps with my trail runners, or breakable crust over sugar. Sometimes the crust would break and I would slide backward in the underlying gravel. 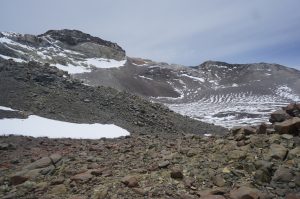 I finally reached some semi-solid rock just below the crater rim, and enjoyed some class 2-3 upward progress. I found clusters of soft, yellow, crystalline rock in a few places, and stopped to pick up a couple of the better samples. I eventually reached the rim at its lower, western edge, about a third of the way around from the summit. With cliffs blocking the rim itself, I traversed around the inside of the crater, partially postholing through knee-deep drifted snow. As I rounded the north side, I picked up a faint trail leading to the summit. I briefly explored the flat area to its east, but did not see any old walls or sacrificial altars, so I soon headed down before it started snowing or something. 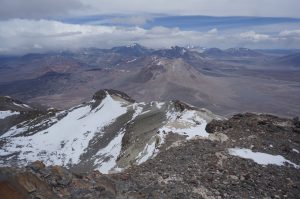 I took a line slightly north of my line of ascent, aiming directly for camp, and found occasional bootprints. I had hoped for an excellent scree-ski, but the pumice was slightly too compact for that, so I had to be slightly cautious. I had spotted some penitentes and potential watercourses from camp the day before, and aimed for one of these, hoping for water, or at least ice. It being near the warmest part of the day, I found a decent stream without too much silt, and filled both my bladder (2.5l) and my old Cepita del Valle bottle (1.5l), alleviating water anxiety for the day. Other than a couple of awkward ditch-crossings, it was an easy walk back to camp, where I performed my usual routine: hang things to dry inside the tent, read on the phone, watch and then listen to the weather arrive (Incahuasi turned white), cook glop, sleep.

El Fraile and the stripe-y sands

El Fraile, with Ojos and El Muerto behind

Peaks to the north getting it