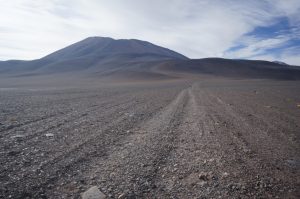 The Paso de San Francisco climbs over 10,000′ from the town of Fiambala. However it does so subtly over 120 miles, normally taking two days on a bike, and rarely resembles a conventional pass. The road starts climbing gently along the eastern edge of the foothills, then turns west to follow a river where it cuts through them to a higher valley east of the high peaks. There it turns north again, climbing gently with a few steeper steps, before descending to the customs post and making a final, switchback climb to the broad saddle between Cerro de San Francisco and Cerro Dos Conos at 15,600′. On the other side, it drops slightly to the Puna de Atacama around 14,000′, where it remains for some fifty miles before descending gradually to Copiapo. In the almost 300 miles between Fiambala and Copiapo there are no towns, only a half-dozen refugios and a lonely hotel on the Argentinian side, and a campground at the Argentinian border post. It is several days’ ride between potential resupplies without side-trips, and I planned to do as many of those as food would allow. 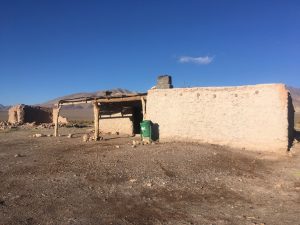 Kevin is not an early riser, so it was already unpleasantly warm by the time we started for the pass. A mild tailwind accentuated the heat, but was still appreciated. Once in the upper valley, the road follows a sort of river/bog that is home to many vicuñas and a single herd of goats. We found clean water at a side-stream, then camped at the “refugio” between official refugios two and three, across from the long dirt road to Monte Pissis. This abandoned adobe building was surprisingly clean, and even had a non-disgusting outhouse. 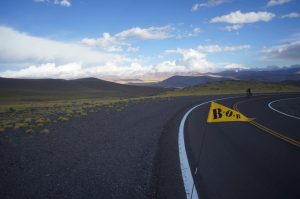 The next morning we continued to the Hosteria Cortaderas, a fancy-looking hotel with very few patrons. I got some water from the restroom sink, and resisted my natural urge to take the remnants of someone’s breakfast. I had hoped the prevailing east and south winds would mostly help us for the rest of the climb, but they turned into a vicious east crosswind somewhere past refugio three. This made for a slow, painful struggle up the valley toward the eventual turn west. It was easy riding from here to top of the hill, then down to the border post, though I had to go slow on the descent to avoid speed-shimmies with my heavily-loaded trailer. 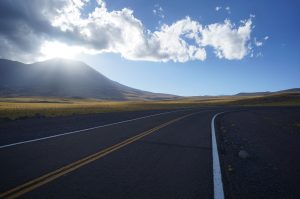 We reached customs late in the afternoon, taking longer than expected to fill out the paperwork, then got some water at the campground just on the other side. It was another 20km to the final refugio at Paso San Francisco, and we debated what to do. Both of us wanted to climb Cerro de San Francisco the next day, and preferred to sleep for free in a refugio rather than paying for a campground, but were not sure we could make it before dark. Doing both ride and climb the next the morning would be very tough, though, so we pressed on. The switchbacks were not steep, but a combination of altitude, weight, and nearly twelve hours in the saddle took their toll. 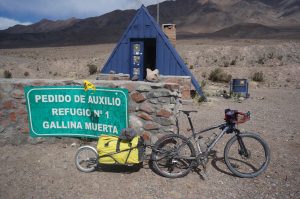 As dusk approached I pulled ahead, racing to reach the refugio without my headlamp. Fighting a cold headwind for the final couple of kilometers, I reached the building at dusk only to find it full of a group of Eastern Europeans and all of their gear, occupying every bit of space. It was windy, dark, and cold, and I was exhausted from riding all day. I asked them if they needed to put all of their gear inside, and one asked me if I had a tent. I turned away cursing, and began trying to pitch my tent, using the shelter as a windbreak.

It was not an ideal campsite, the wind was vicious, and my hands were going numb, so I was still fighting with the tent when Kevin pulled up by headlamp. The two of us managed to get the thing pitched and tied down, then a late dinner inside — Kevin kindly donated some pasta, giving me one extra dinner worth of food in the Puna. It was almost 11:00 by the time we were done, so there was no chance of an early start. Hopefully I could sleep in a bit, and the weather would cooperate long enough the next day to summit and continue to some kind of shelter west of the pass. 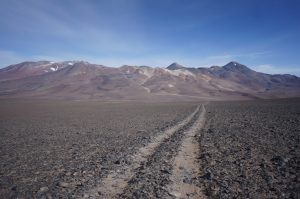 While the people in the refugio were not aggressively loud, they made enough noise to wake me up, shining their headlamps at the tent for good measure. Kevin and I had breakfast in the shelter, which had plenty of room now that the other party had (1) left, and (2) consolidated the rest of their gear in one corner. I locked my bike and trailer behind the building, then set off up the road toward the peak, which started off smooth but quickly turned nasty as it climbed. Some people seem to drive well above 5000m, but we passed a capable-looking Toyota parked just above the flat. 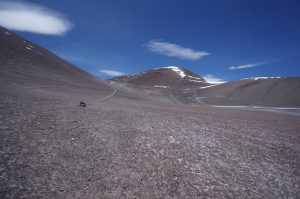 The road disappears near some basic tent spots, above which a mess of cairns and faint trails lead upslope to the left. The paths converge at a broad ridge, where a single trail leads down slightly to a saddle with better tent spots and windbreaks. From there, the up- and down-tracks are obvious, switchbacking toward the summit before contouring left around a steeper slope, then climbing again to reach a large bowl with a small glacier or penitente field at its far end. We finally saw someone ahead of us here, presumably one of the refugio party. 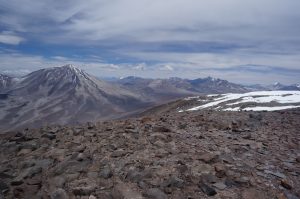 We passed the refugio party below the final, short climb to the summit plateau, where another pair of hikers pointed me to the highest of several minor bumps, or at least the one with the cross. This being a 6000m peak on the Chile/Argentina border, I found the expected Banco de Chile box, though this one contained the usual debris found on a popular peak rather than an orderly ledger. Kevin joined me a few minutes later, and we hung out for awhile on the nearly windless summit, enjoying the views as the other party straggled to the finish. They turned out to be from the Czech Republic, and their friendliness made me feel somewhat guilty for being rude the night before.

The wind began to pick up around 1:00, so we started a quick retreat; while altitude absolutely destroys climbing performance, it has almost no effect on one’s rate of descent. There was someone outside the Toyota when I passed, so I stopped to talk. He turned out to be an aspiring guide from Patagonia, hoping to climb some easy 6000m peaks, but not yet acclimatized. I admired his sleeping setup in the pickup’s shell: while it looked at first glance like the standard wooden platform, it was better than most, with a light metal frame, nicely rounded edges, polycrylic finish, and an enviable amount of headroom compared to my old 4Runner setup. 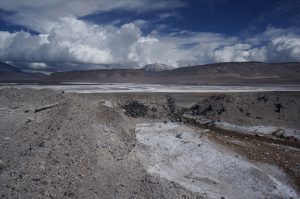 Back at the pass, we switched to bike mode, then set off into the expected afternoon headwind. Like in Peru’s Cordillera, precipitation in the Puna de Atacama comes from the east, and is held back by dry westerly winds strong enough to keep it desert and nearly lifeless. I had expected these conditions, and the Puna did not disappoint, with a headwind strong enough to keep me in my lowest gear on the flats. Several sources had mentioned a black pipe shortly before Laguna Verde as a source of drinking water along the road, but we saw no such thing. Instead, relying on Biggar, we filled up at the Rio Agua Dulce, the only flowing water we saw for miles. It was unpleasant-tasting, and issued from a lagoon, but did not seem to be salty or come from a hot spring, so it would probably not kill us. There was supposedly a nasty refugio at the Laguna Verde hot springs, but the abandoned police station was closer and seemed nicer, with a kitchen area (with table for cooking), several bedrooms, and stickers showing that we were not the first bike tourists to sleep there. Over dinner (more pasta for Kevin, oily grits for me), we watched a vicious lightning storm play out over the Paso San Francisco, thankful to have snuck through just in time.

Some problems with the road