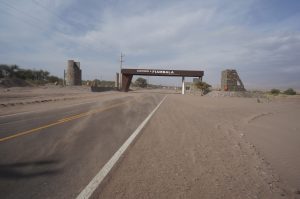 After over a month in the Andes, I was finally approaching my major objective: the Puna de Atacama. I still had another 150 km or so of riding to reach Fiambala, the final town on the Argentinian side of the Paso de San Francisco. I got an early start on the last part of the climb north of Famatina, then sped down the windy descent as fast as I dared with a trailer. I was not too pleased by the two muddy water crossings on the other side, but they were shallow, so I did not spatter myself too badly. A combination of a slight net downhill and favorable winds helped me make good time to Tinogasta, despite the dirt section being longer than I had been told. 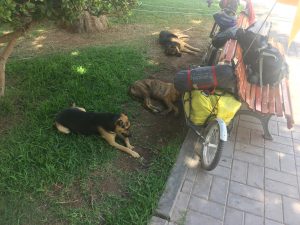 Tinogasta is a nice little city, with usable WiFi in its town square and a real supermarket. (In retrospect, I should have done my Atacama shopping here and dragged the extra 25 pounds to Fiambala, which has truly pathetic grocery options.) I bought sandwich fixings and a Coke, then sat down on a shady bench to wait out the worst of the day’s heat. The usual plaza dogs came by to see if I had anything to offer, but I needed all of my food, so after awhile they gave up and lay down in the shade behind my bench.

Once it had cooled down a bit, or at least once the sun was lower, I tanked up on water and set off on the final 40 km to Fiambala. The wind was stronger but still favorable, so I made good time on the hot, dry, and slightly uphill road up the barren valley. I passed numerous adobe churches, which I ignored, and occasional trees, where I stopped in their shade to eat a sandwich and/or drink some water. This stretch would have been brutally demoralizing with a head- or cross-wind. 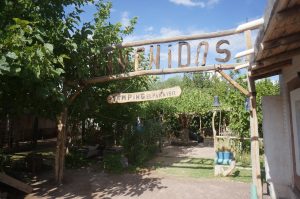 The wind was truly raging as I neared town, sending sand skittering across the tarmac and creating a small dune in front of the “Bienvenidos a Fiambala!” building. This first impression did not make me want to move there. I passed some dilapidated buildings and the gendarmeria, then continued past the Paso de San Francisco turnoff toward the main part of town. The first camping place on maps.me looked crappy and was right next to the highway, so I ended up by chance at Camping Paradiso, a couple hundred yards off the main street on a dirt road. The place looked so-so, but I was tired, and did not feel like paying for a hostel.

It turns out that I was lucky to have stopped at Paradiso, which turned out to be better than its first impression. It was quiet, only $5 for two nights, and much of it was a grape arbor, with nearly-ripe grapes free for the taking. There were a few overlanders in the vehicle part, and a lone bike tourist under the arbor. I was hesitant to approach him, not sure that a solo traveler would want conversation, but went over to say “hi,” first in Spanish and then in English. The other tall, skinny Irishman (actually Irish, unlike Yours Truly) introduced himself as Kevin, and said he had been traveling around South America by bike for about a year. I came to learn that he was slightly older than me, and had spent most of his adult life cycling around most of the world, including places like Sudan where I would expect a bike tourist to very quickly end up kidnapped and/or dead.

We talked for a bit, then I took a much-needed shower (mistakenly using the decommissioned and disgusting showers in the bathroom), then headed “downtown” to get some real food. The options at the “super” on the plaza were truly grim, with nary a fresh fruit or vegetable to be found. I was perusing the canned options when someone called my name. Since only a few people know me on this continent, I was only slightly surprised to see Kristap and Kristina again. They were returning from a successful climb of Monte Pissis, staying in the hostel for a night before heading back to Latvia. We talked for a bit, but I was clearly impatient to eat, so they left me to forage. There turned out to be a greengrocer a block or so away, who sold bedraggled but usable produce to go with my eggs. 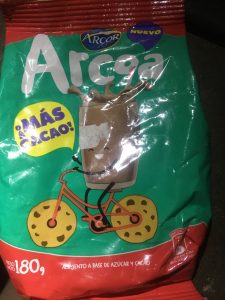 I enjoyed one of my last non-utilitarian meals for the next couple of weeks, then stayed up entirely too late talking to Kevin about his adventures. I am usually better-traveled than the people I meet, especially the villagers I had mostly been talking to for the last month, so this was a dramatic change of pace. Somehow my mountaineering trips seemed mundane compared to cycling around Africa, or from Europe to China. Once again, bike touring had proved an excellent people-filter.

The next day was mostly spent killing time, trying unsuccessfully to download fresh podcasts and maps for more peaks on the pathetic plaza WiFi, and occasionally managing to send an email. However, I also needed to buy about 60-70 thousand efficient calories at Fiambala’s pathetic collection of shops before they closed for the weekend. Working with what was available, I ended up with: 2kg polenta, 800g oats, 1.6kg powdered milk, 1l oil, 600g Swiss cheese, 3 sausages, 3 packs of chocolate milk mix, 600g chocolate, 800g marzipan, and 1kg walnuts. Other than being a bit short on protein and variety, my diet for the next two weeks could be described as… nutritionally adequate. With one final shower — this time in the correct and somewhat cleaner one — I was prepared for my time in the wilderness.