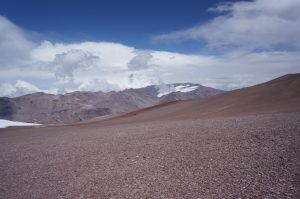 Majadita, only slightly higher than Cerro los Olivares, is the highpoint of the Cordon de la Majadita, a subrange near the Paso Agua Negra. After Olivares’ talus hell, I was looking forward to doing most of the climbing on the peak’s large north glacier. While it was more difficult than anticipated — these are the high Andes after all — it was still a big improvement. It also seems to be much more popular, with many tent platforms along the way, and even a use in places if you know where to look. 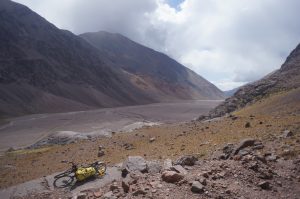 I was happy to spend two nights in the same place, and was lying half-awake in my sleeping bag when I heard a truck approach and stop, and someone get out. A man called out a couple of times, so I got up and poked my head out. Apparently they had just stopped to make sure everything was okay — ¿Todo bien? Si, todo bien. — and returned to the highway. It was past time I got up anyways. I took my time packing up, debating whether to take a side-trip to Argentina’s second-highest pass (some in Peru and Bolivia are higher), just to say I had ridden the whole thing, but my fatigue plus gathering clouds convinced me to simply head to the next peak. I had initially hoped to do it from the road in a day, but after the Olivares experience, felt it was wiser to do some of the approach the day before. 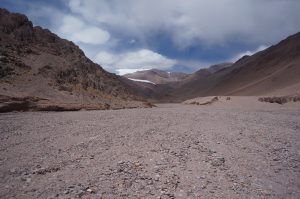 I rode down the pass to the stream and side-road I had noted on the way up, then pushed my bike a couple of hundred yards off the main route before repacking, and locking the bike and trailer on a rock shelf off the road. I continued up-road a short distance on foot, then followed a mostly-guanaco trail with occasional cairns from where it crossed the stream. The trail soon disappeared into a flood plain, but the way was obvious, and the tent platforms on flat spots, plus cairns indicating trails bypassing narrow spots, convinced me I was in the right place.

Biggar suggested camping near 4600m, but I found a good spot closer to 4400m, slightly above the junction of several streams descending from the glaciers above. I was tired, and the camping prospects above did not look encouraging, so I stopped there, set up my tent with the narrow side to the wind (which immediately shifted), then killed time reading, trying not to exhaust my meager remaining food (thanks, Nati!) and serving as a human tent anchor for the rest of the afternoon. I suspected that the next day would be long, with a 6000-foot climb, the hike out, two gear transitions, and a forty-some mile ride back to Las Flores, so I set my alarm for 5:00, prepared a fresh batch of milk-and-chia slime (learned from two Germans in Peru), then finally bored myself to sleep. 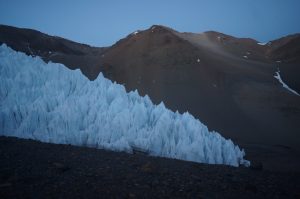 I woke a bit before my alarm, downed my oatmeal, and headed toward the glacier by headlamp, hoping to find a trail I saw cutting across the hillside the previous afternoon. I never found it, but the talus was blessedly stable for a change, so my ascending traverse was mostly painless. I glanced around for tent platforms around 4600m, finding none, then continued my steady uphill progress. I figured I would eventually hit a glacier, at which point it would no longer matter if I was “on-route.” 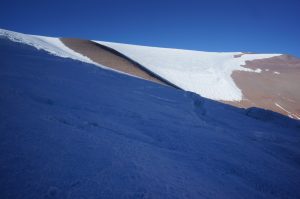 As headlamp time ended, I found myself on a slight ridge just below the glacier’s current end. The tongue extending to its right was badly broken up, so I descended, then continued along a scree ridge between two branches of Majadita’s large north glacier, looking for a point where the glacier’s surface was smooth enough for efficient travel, and its edge was climbable. Crossing another small depression to the left, I finally found one near the source of one of the glacial streams. I rued my early start as I fiddled with my crampon straps in the glacier-cooled wind, my hands becoming slower and clumsier as I threaded them through the buckles and tightened them. I steeled myself to grip the cold metal of my axe, then followed the watercourse up onto the glacier’s surface. As soon as I was on flatter ground, I shoved the axe between my shoulders and balled my hands up in my gloves. I watched the sun slowly creep down the slopes to the west, anticipating its double warmth when it finally reached me on the glacier. 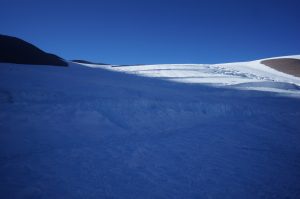 The Majadita glacier is surprisingly large and complex. The lower part was easy and safe to cross, and I ascended as quickly as one does above 5000m. The middle was more complicated, however, and probably less safe. The glacier is a broken mess on the left, and cut by large crevasses in the center. I stayed near the center, weaving around crevasses and crossing them on frozen penitente bridges. I did not think much of it until near the top, when I got a clear view into a couple of the larger holes, and saw the underside of the snow bridges. Fortunately I was crossing early in the morning, but I thought it might be best to find another way down. 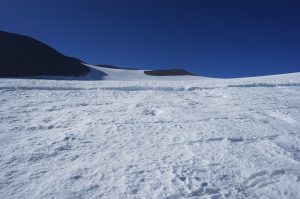 I stayed on the glacier as far as I could, finally climbing perhaps 100 vertical meters of scree to reach the summit. I found a post, and a sort-of register containing a single entry from a winter ascent a few years ago that mentioned “viento blanco”. Fortunately it was clear for me, so I found a spot out of the wind to enjoy the views. Cerro los Olivares in particular looks much better from this angle, with its eastern glaciers on display. 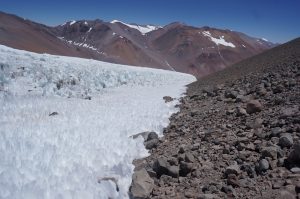 I though it would be much faster and safer to descend the scree slope right of the glacier, and this tactic worked for the first thousand feet or so. I even found a faint use trail. Unfortunately the fun ended toward the middle of the glacier, where angle-of-repose scree drops directly to a field of knee-high penitentes. Both were wretchedly slow going, but I took some solace from the fact that I still found bootprints: someone else had suffered as I did. 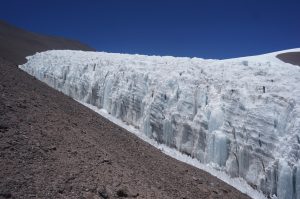 I eventually reached the right-hand side of the glacier’s toe, and found a couple of tent platforms and a better-defined trail. Checking my map, I realized that this was probably the 4600m camp mentioned in the guidebook. However, the trail was loose enough that I was glad not to have climbed it with my overnight gear. I packed up camp as quickly as I could, hiked back to my bike, yard-saled my gear again, and was off down the pass by late afternoon. The only calories I had left were powdered milk, which I poured into both of my waterbottles.

My original plan had been to continue to Rodeo, another twelve miles past Las Flores, but that was clearly not happening. I had the expected headwind all the way down the pass, but momentum was on my side, so it was not a problem until the final flat miles to the customs station. I stopped to get stamped back into Argentina, swung by the store to buy random food, then returned to my familiar campground. There was a soccer game going on, which was not great, but also a fellow bike tourist and English-speaker, which was much more pleasant. Simon was a retiree from England, stretching out his savings until he was eligible for a British pension. He had been in South America much longer than I, traveling on a much more touring-oriented bike and working on various farms. It seemed like a pretty good retirement if you ask me…

View back down glacier