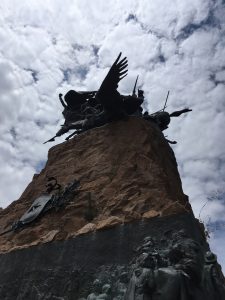 Cerro de la Gloria is a minor hill on the west side of Mendoza with a good view of the city, and a convenient target of opportunity when everything is closed on Sunday in this very Spanish country. In theory, my itinerary could have taken me straight north from Uspallata, as the only mountaineering reason to visit Mendoza is to obtain an Aconcagua permit. However, Mendoza would be the last real city I would see for a month, and I had heard that it was one of the nicer large ones in South American, so I dedicated a few days to a side-trip.

The ride from Potrerillos to Mendoza was a big improvement over what I had experienced so far. For the first part, I left the truck route of RN 7 to follow RP 82, a two-lane road that follows the Rio Mendoza more closely than the main highway. There was the usual headwind, but it abruptly turned into a tailwind when I exited the river valley west onto the plains. As I got closer to Mendoza, I was surprised and pleased to find green-painted dedicated bike lanes (“ciclovias”) which allowed me to avoid most of the city traffic on the way to my randomly-chosen hostel. 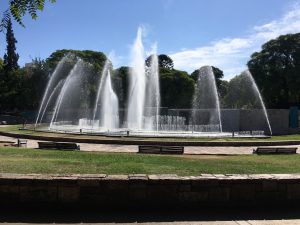 I was substantially less pleased when I reached my hostel. The one in Huaraz had been fairly quiet and mostly inhabited by mature and interesting people, but this one was another matter, overcrowded with party kids. I had been pleased to find a dorm bed for a bit over $5 including breakfast, but when I entered the 6-bed room in the middle of the afternoon, I found two girls passed out on lower bunks, and someone’s clothes drying on the ladder leading to the least-bad upper bunk. Since I was on an early-rising mountaineering schedule, and had a ton of gear that needed to be sorted and reorganized, this was less than ideal. At least the WiFi worked, so I could find a better place to stay the next night. 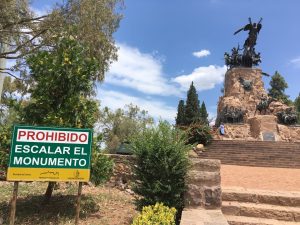 After a night of mediocre sleep in the hot and overcrowded bunk room, I woke a bit after 6:00 and went downstairs, where I found two Australians still talking and going through liters of beer. I couldn’t help but smile at their heroic endurance, but they also reinforced my desire to get out of this place. I had paid the “big bucks” (a bit over $20/night) for a private room in another randomly-chosen hostel nearby, to which I rode around noon. This one, Hostel Estacion Mendoza, was much more my style, smaller and less crowded, with an older clientele and staff who actually lived there, as opposed to bored kids with keys to the beer. 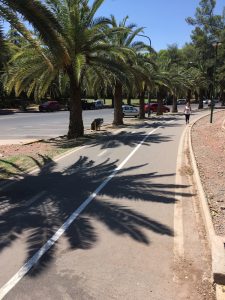 It was early afternoon on a Sunday, so everything was doubly closed for both religious and siesta reasons. I spent the rest of the day checking out the city by bike. I first rode up Cerro de la Gloria, where I checked out the elaborate war statue and met an older couple from Chicago. Then I spent some time touring around the large park near its base, with many bike and running trails popular with the locals. Finally I checked out a couple of the smaller parks, including the Plaza de Armas, then returned to the hostel to shower. It was one of those weird showers where you just close the bathroom door, stand on the floor, and get everything wet, but it was hot and got me clean.

Afterward, I was making use of the spotty hostel WiFi when a woman at the next table in the courtyard said “hey, I recognize your bike.” It turned out that she was a translator from Buenos Aires who had been hoping to climb Cerro el Plata at the same time I did. However, thanks to time/speed/weather issues, she had only climbed Vallecitos. Both she and her friend (another translator) were smart, talkative, and of course spoke excellent English, so I had an unexpectedly social time.

The next day was for preparation: riding around town to find a few big-city things and generally preparing for a month of nothing but small towns and markets with idiosyncratic and limited selections. I added sealant to my trailer tire and extra guy lines to my tent, and dined on comfort food — fried cabbage and eggs. I also spoke to my friend in Spain via WhatsApp; as a move in Facebook’s quest for world domination and even more data, it does not count against my data quota. I was annoyed to have someone playing violin exercises while I was trying to understand a mediocre VoIP connection, then immediately regretted my irritation when I met the guy practicing, who was working/living at the hostel while preparing for a difficult and high-stakes recital to get into the national music school. He even put together a barbecue later, with sausages, grilled onions, and tripe. 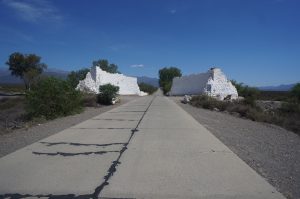 Tuesday morning I set out to return to Uspallata by a non-highway route, with a rushed and early start that robbed me of a chance to exchange contact information with any of the people I had met. My first attempt, via RP 13, ended shortly after my phone directed me along a dirt road through a garbage dump. I rode to the other end of the dump in the hope that things would improve, but they did not, so I rode back through, re-sampling its bouquet, and tried another option. 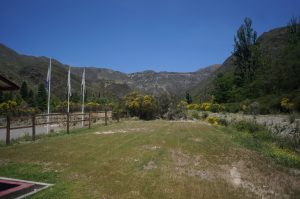 My next attempt, via RP 52 to its north, probably would have scared me off if I had known what I was getting into. After twenty-some miles north in an almost straight line, the road began climbing an alluvial fan, then turned up a dry river valley. I was running uncomfortably low on water, but fortunately I was able to refill at the closed guard station for Villavicencio, an old hotel or something that is now a weekend tourist attraction. Showing up on a bike earns you a lot of good will: despite blatantly climbing over the cerrado sign and disturbing the rangers’ lunch, they were happy to let me refill from their garden hose, and even talked for a bit. 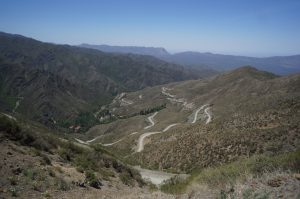 The road turned to dirt just past the hotel, and remained that way as it climbed to a broad 10,000-foot pass. This pass seems to have been the original route between Uspallata and Mendoza, and was used by San Martin, likely a deputy of Simon Bolivar, according to interpretive signs and interesting monuments along the way. Fortunately the climb was gently graded, so I was able to ride it at a decent pace, the road was spectacular in its own barren way, and there was almost no traffic. There were also ample distractions, including an old telegraph station, many guanacos, and an utterly fearless fox sitting on the shoulder of the road.

Unfortunately, the upper pass and part of the descent toward Uspallata were badly washboarded, making for miserably slow progress. However, it became semi-paved again partway down the Uspallata side, so I returned to my familiar campground at a reasonable hour, where the owner recognized me and gave me a discount. Knowing about the wood-fired hot water heater this time, I was able to have a hot shower before cooking a quick dinner, preparing sandwiches for the next day, and passing out in my tent.

Bread pirhanas in the big lake

Higher along the pass

Finally at the pass