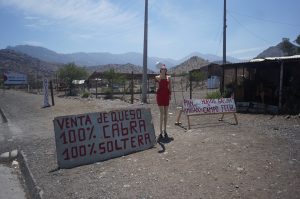 I had more than a day’s ride to the first interesting trailhead, so I figured I would grind out as much of it as I could on the first day. A number of factors made this fairly brutal: (1) I was carrying at least a week of food, and probably more, since I planned to be on foot for at least three nights, and could not resist my cost-saving urge to buy in bulk. (2) However much I completed, it would be net uphill. (3) My previous bike tour was after the Fall Equinox and relatively high, so the amount of warm-enough daylight limited me to 8-10 hours. Down here near the Summer Solstice, I have 15-ish hours of usable light. (4) In addition to the food, I was carrying my heavy Alps Mountaineering 2-person tent (a credible knockoff of a Big Agnes that costs over four times as much) and full mountaineering gear, making my full load (bike and trailer plus all my stuff) somewhere around 110 lbs. Time to get fit in a hurry…

I made the mistake of waiting for the hostel’s breakfast (white bread, cheese, ham, powdered coffee and milk), so I got to fight my way out of Santiago during the morning rush hour. My phone told me to take the freeway north, but the bumper-to-bumper traffic and signs clearly indicating that bikes were not allowed dissuaded me. I instead followed local streets and permanent-seeming detour signs saying “norte,” and eventually the city thinned.

From there I took the frontage road along highway 57. Two roadies passed me, which I took as a sign that I was on the right route for bikes, though it was hardly pleasant. The frontage road ended near Colina, and after unsuccessfully trying to follow some side-roads, I ventured onto the freeway, where I soon encountered a local cyclist. Despite feeling a bit western, it was good to know that Chile still operates by Latin American rules. Despite the trucks and high speed limit, it was probably safer than the local streets thanks to its wide and generally clean shoulders. 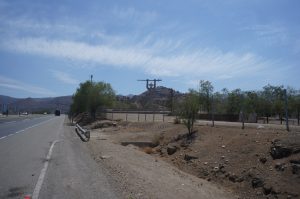 I made good time to the base of the hill before Los Andes, where I stopped at an empanada place. I ordered a shrimp and cheese and a local Mountain Dew knock-off; the former was mostly cheese and kind of bland, but at least it would give me energy for the climb. I slowly made my way up the broad, straight incline until I was confronted by a tunnel. I was ready to turn on my lights and have at it, but a tunnel guard waved me to stop. They take their tunnels seriously here, so after waiting awhile outside the office, my bike and I rode through the tunnel and over the pass in a maintenance truck. Talking to the driver, I learned that ferrying cyclists is a common, if not frequent activity. They even had a bike rack for the truck, despite bikes technically not being allowed on the road. 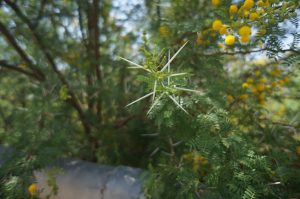 I was growing desperately low on water as I made my way toward highway 60, and looked longingly at a couple of streams passing below the highway. Unfortunately they were defended by fences, and any alternative route was blocked by incredibly spiny brush, some with thorns almost an inch long. Finally, at the top of a hill, I stopped at some combination truck stop and dwelling to fill my various water receptacles in the bathroom. I had expected water anxiety to be an issue in the Atacama, but did not expect my route to be so dry at this point. 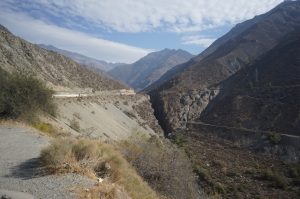 Once on 60 (the Paso de los Libertadores), I was finally off the freeway, but still on a major trucking route. Sometimes the trucks were polite, but they would often pass uncomfortably close, and a couple of times I had oncoming drivers ignore me while passing, an unsettling experience. The road climbs steadily along the Rio Aconcagua, which passes through an impressive slot canyon at one point. It was mostly graded gently enough for me to cruise along in low gear, though I had to stop and rest repeatedly on a couple of steeper sections. 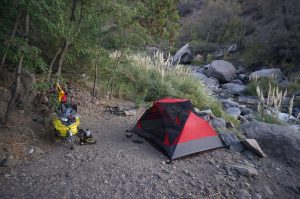 At one point I was passed by two guys with ultra-light bike-packing gear. We talked for a bit, and I learned that they had come from Spain to compete in the Across Andes race, a bike-packing event starting and ending in Santiago. They left, but I soon met them again when one of them got a flat; hopefully my sealant-filled mountain bike tires will fare better. They passed me again, and I stopped to fill up water at a gas station before looking for a place to camp.

I soon found one next to the river that even had old fire rings — score! A small dog had been following me for at least a kilometer, despite receiving no encouragement and almost getting hit by several trucks (they seemed to care more about dogs than cyclists…). When I started to set up my tent, she walked all over my ground-cloth. I tried to shoo her away, but eventually let her lick out my tuna can while I ate dinner. When I refused to let her into my tent, she curled up right outside next to my head, where she stayed for much of the night. Dogs are strange sometimes…

Military base near camp