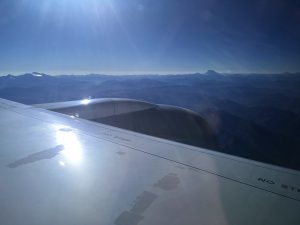 The air travel can be the hardest part of these international trips, with one or two sleepless nights spent in airports or on airplanes, ending in an hour-or-more plod through customs in a language you don’t understand — like Irish. Then you either stumble to a hotel at some unholy hour, or try to sleep on benches deliberately designed to hinder sleeping. Fortunately this time was much easier. Leaving Denver in the early afternoon, I had a reasonable layover at Dallas, then an overnight flight to Santiago that got me there at a normal hour. 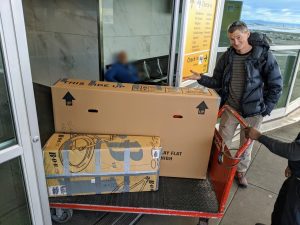 I was worried about packing for this trip: not only did I need to bring the usual mountaineering gear, but I also needed to pack enough stuff to support three months of bike touring in a place with very limited spare parts. I also needed to cram almost all of my gear around my bike and trailer in their boxes, convince the airline that these two mince-gear pies were “sports equipment,” and keep them both under 50 pounds. I did it, though barely: my bike shared a box with my mountain boots (stuffed with socks) and a few other things, every nook of the trailer was filled, and both boxes weighed somewhere between 40 and 50 pounds. So much for fast and light… Ted snapped a picture of the unusual scene, only to anger some TSA rent-a-cop who was captured in the photo while playing around with his phone while on break. I found this ironic, given that I’m almost positive that both Ted and I appeared on TSA surveillance footage, and would not be surprised if we were run through a facial recognition database fed with state drivers’ license files. But anyways…

I found some reasonably good and healthy lounge food in both Denver and Dallas, and tried to get in as many vegetables and fresh things as I could. Low weight and volume, and high tolerance for hot and cold, will define much of what I eat for the next few months. That means a diet of primarily powdered stuff poured into boiling water, fruits and nuts, and canned fish. They don’t even seem to have pop-tarts down here, though the Latin American junk food scene is strong, and I am trying to become a locavore.

The leg from Dallas to Santiago was my first time on a Boeing 787 — the plane with the wings that flex alarmingly upward when it flies. I found it mostly pleasant, with larger windows than other planes, tolerable cabin noise, and plenty of leg room. It would have been better had the original seating arrangement remained in place. I had a window on the east side of the plane, with an empty seat and a friendly older woman completing my part of the row. Unfortunately that woman somehow upgraded to business, to be replaced by a younger one who immediately stuck in her headphones to preempt any social interaction, and put her legs up to make it awkward for me to get up and fetch anything out of my pack. Later, another similar woman took the middle seat after finding that her original one did not recline.

At least I had a clear view of Aconcagua and the other high peaks in the region as we descended into Santiago. The backlight through the partly-tinted glass made it hard to get a photo, but I tried. It was already 70 degrees when we landed around 9:00, and into the 80s after spending an hour or more going through customs. I was finally reunited with my bike and trailer. Both boxes had been rifled through by TSA, but they appeared unharmed, as did their contents. 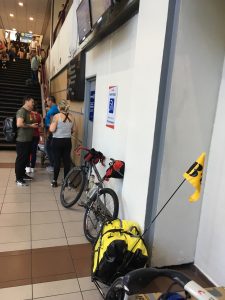 I briefly explored various options to store and recover the boxes, but quickly realized that it just wasn’t worth it. It was painfully hot outside, so I assembled my bike in the terminal, which apparently did not disturb either travelers or security. This was when I realized the third thing I had forgotten, pliers (the others being a pin for SIM removal, and a pen to fill out the customs form). The BOB trailer is almost entirely assembled and disassembled with a hex key and Phillips screwdriver, but its hinge requires two pairs of pliers for optimal assembly. I spent a half-hour or so wandering around the airport trying to desribe pliers with broken Spanish and hand gestures (“kind of like scissors, but not”). Finally, a woman at a phone store lent me hers once I allowed her to hold my phone hostage. 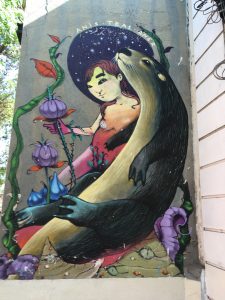 It was early afternoon by now, so I ditched my original plan to just ride away from Santiago into the sunset. A quick online search turned up a hostel toward the center of the city that was too much ($24) but not ridiculous. Wheeling my monstrosity out of the airport, I had to smile when one of the employees asked if I was going to Patagonia or Atacama, then made as if to climb on my trailer. The hostel actually turned out well, as there was a supermarket right acruss the street, and I got to spend the afternoon seeing a bit of downtown Santiago, some of the only “culture” I plan to experience this trip. It has the usual somewhat run-down Latin American feel, but is cleaner and less dog-infested than Huaraz, and far more sane than Mexico City, Lima, or Quito. I felt mostly comfortable riding through the streets, though a crazy mess of one-way roads and some map-reading errors made the short ride take longer than expected. Tomorrow the real trip begins.

Nice park next to the hostel