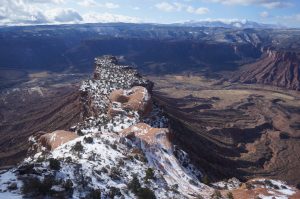 With the weather making the Colorado mountains unpleasant, I realized that I should have stayed in Moab for another couple of days. Fortunately, southwest Colorado also has low-elevation sandstone towers, and I was able to find another “Cowboy Route” on The Palisade, an obnoxious but not unreasonable drive away. The weather in Grand Junction was not bad, but it rapidly deteriorated as I drove down 141 through Unaweap Canyon in the evening. This byway does not see a lot of traffic or plow attention, so I took my time driving the snowpacked road through a blizzard to the tiny town of Gateway, and continued with some trepidation on the partly-frozen mud road along the Dolores River. I pulled off at the 4WD road leading toward the Palisade’s west side, and hoped it would not snow too much overnight. 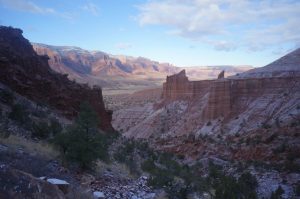 The next morning, I was pleased to see only a dusting of snow. However, none of that would melt off the west-facing route before I was done, making me somewhat nervous about the “class 4-5 slabs,” made doubly treacherous by being snow-covered and/or composed of wet sandstone. Still, I set of hiking up the road in my puffy, continuing up the right-hand side of the wash after it ended. I saw a couple of cairns, but there was no use trail on this obscure peak. 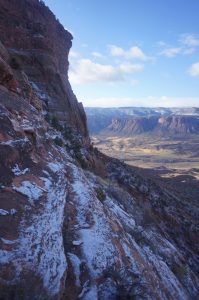 I made a sometimes-sketchy dirt traverse along the base of the cliffs, then easily found the obvious start of the route, a bit of blocky class 3 followed by a traverse to the left. The first crux, a dihedral, went easily thanks to positive holds and stemming opportunities, and I was soon traversing the catwalks above, which were fairly well-cairned. I had been slightly nervous about crossing this section in the snow, but there was enough bare rock on the inner edge of the ledges that I could proceed without too much caution. 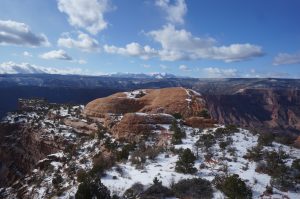 This brought me to the slab crux, which would have been trivial when dry, but was now somewhat more thought-provoking. Traversing left past the shortest section, I found a seam and some blocks that offered more traction and counter-pressure, and carefully made my way to the top, rejoining the standard route at a rappel anchor. I was relieved, believing that I had climbed the hardest part in current conditions. Above, I followed cairns as the route zig-zagged toward a saddle in the mesa between the main summit and a red sandstone dome. I got a bit off-route, taking a harder line than necessary up one rock band, but eventually reached the short 5.4 mantel. I did not like what I saw: even with the cheater step, the first step-up on the small foothold was big, and far from secure with a dusting of snow over wet, crumbly rock. I tried traversing farther left, then nearly gave up before heading right, hoping the ledge around the red bump would offer an easier option. 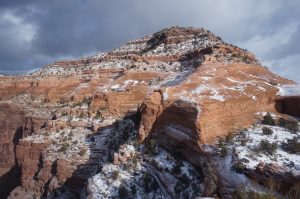 To my surprise, I found that the ledge indeed led around to the top of the mesa beyond the bump. Better still, getting over the bump was only class 2-3, with low-angle slabs that could be carefully managed even when wet. It took awhile, but I was back on-route. From there, I found one more semi-sketchy bit of slabbing and an awkward crack/offwidth on the right, but mostly it was easy hiking to the summit. I passed the shack and box spring along the way — God knows how all that hardware got up there, or why — then found the advertised hammer and egg-beater on the summit cairn. 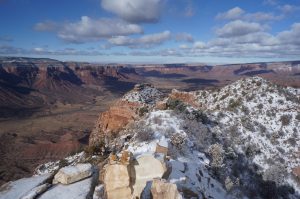 The views were magnificent, with red rock country and the La Sals to the south and west, and the fading storm over the higher peaks to the east. The sun had finally come out, making it warm enough to hike without my puffy. I took some photos, then reversed my route. The sun was starting to dry the rock, making things a bit more secure, and I was back at the car for a late lunch. 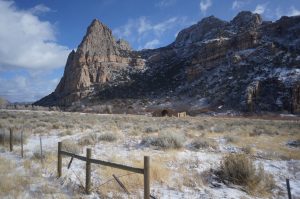 I had planned to tag Thimble Rock Point, a minor peak on the southeast side of Unaweap Canyon, but it was awfully cold and windy when I got out to check out the access road/trail and read the interpretive sign. Unaweap is an interesting feature, a canyon with two outlets separated by a minor saddle in the middle, with a wide variety of uplift rock to either side. I was glad to have seen it during the day, but not interested enough to spend the next few hours tromping through the snow. Another time, perhaps…

Mud towers at the base

Route is just right of center