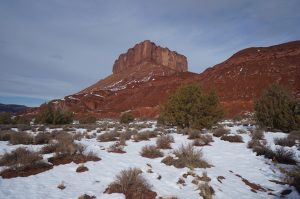 With a serious winter storm and cold front slowly overtaking me from behind, I was looking for somewhere dry-ish, warm-ish, and somewhat interesting to get in a bit of exercise. The scenic and relatively low Moab area seemed like a good option, with easy camping and plenty of minor summits only 5000-6000 feet high. Castleton Tower and the Fisher Towers were also only slightly out of the way; while I could climb neither, I could at least look at them as I passed. 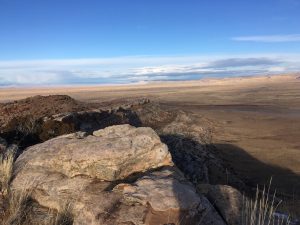 Crescent Benchmark looked like an easy hike-and-bike from Highway 191, so I started with that. I was the only one using the nearby BLM camping/trail area on a chilly morning, listening to the highway traffic and dodging the occasional frozen puddle as I biked to where the road got rough. It looked like jeeps and quads still occasionally use this road, but it is mostly abandoned, as it doesn’t really lead anywhere. 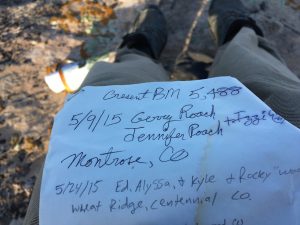 From the end of the road, I hiked up what looked from below like a nice sandstone slab, but was actually cut by numerous steep-sided gaps, inconveniently oriented perpendicular to my path. I hopped them at narrow points, winding back and forth a bit, then scrambled up the left side of the caprock to the ridge. There were several bumps on the summit plateau, with the highest having a cairn, some old survey equipment, and the benchmark. The register had been placed only a few years ago, by none other than Gerry and Jennifer Roach. 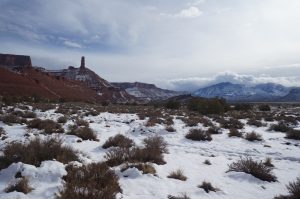 I returned to the car, then drove almost to Moab before turning east on Highway 128. This route follows the Colorado River through an impressive red rock canyon, and is apparently a popular recreation area when in season. I saw a couple of boulderers and some people taking pictures, but it was too cold for rafting or climbing. I turned off on the Castle Valley road and, after a few miles, spotted the trail to Parriott Mesa almost by accident. It probably owes its prominence to the crowds out for a short hike to view nearby Castleton Tower; certainly none of the half-dozen people I met seemed capable or even aware of the route up Parriott. 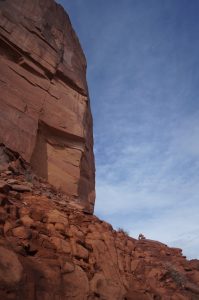 The trail faded a bit but remained clear as it wound toward the mesa and climbed its lower dirt slopes. The recent snow had turned the dirt into classic Moab mud, but the trail was packed enough to be manageable. I was surprised to see that someone had already been here since the snow, and grateful higher up, where the route winds around to north-facing slopes. The snow was deep enough to hide any trace of the route other than a few of the larger cairns, and the correct path is hard enough to find that I might have given up without a path to follow. 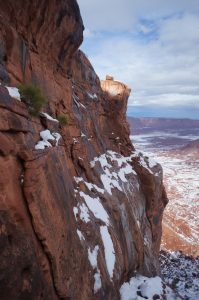 Even with the previous party’s prints, I missed the route to the short via ferrata, and almost turned around before spotting it from above. The traverse it protects would be airy but manageable when dry; however, with snow and ice partly covering the wet sandstone, I was glad to be able to haul on the metal cable. The pitch above, an exposed dihedral/chimney with a handline, was surprisingly tricky. I would ordinarily have tried to climb it without pulling on the rope, but with the bits of fresh snow and wet, brittle rock, I did not hesitate to “cheat.” 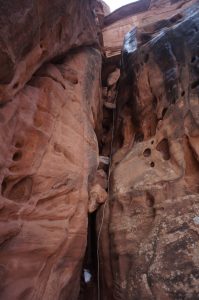 Above the first chimney, the route climbs and winds around to the next bowl. I was grateful for another hand-line protecting an easy step-across, which would have been fairly treacherous thanks to the snow and ice hanging around on the north-facing slope. Other than its first move, the second chimney is considerably easier than the first. Rather than being a clean fracture, it is a weathered gully, with pockets and even some handles on both sides making for positive hand- and foot-holds. The final two mantels leading to the summit, however, were surprisingly challenging. Even with a cheater step that someone had installed, the upper one was vertical, smooth and almost shoulder-high. I am not sure I could have climbed it without the rope, as the crack on the left was too narrow for a foot-jam in trail runners. 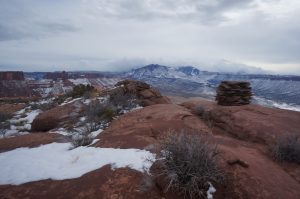 Once I made my awkward way up the two mantels, the final walk to the high-point was straightforward. I stood for awhile next to the large cairn, taking in the view of the snowy La Sals to one side, the rapidly-drying red desert to the other, and the handful of farms in Castle Valley below. Castleton Tower looks much less impressive than from below, as it blends into the desert background rather than being highlighted against the sky. The flat light filtering through the high clouds also did not help.

The descent started slow, as it had warmed up enough for the mud and slush to become slicker. I passed a few other parties on the lower trail, none of whom seemed likely to go farther than the Castleton viewpoint. I had planned to tag another minor peak in the area, but decided that it looked like too much work, and instead continued the drive east.

The Rectory and Castleton from saddle