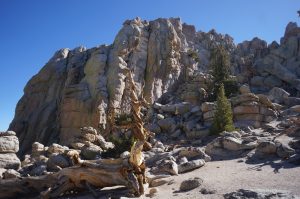 Muah and Cartago are two more SPS peaks south of Horseshoe Meadow, lying on the eastern edge of the southern Sierra plateau; Ash Meadow Peak just happened to be in the way. Unlike the previous day’s all-trail outing to Kern, this outing was a somewhat more interesting lollipop, with more views and cross-country travel. Though my route started from the same parking area as for Kern, I thankfully did not have to repeat any terrain thanks to the redundancy of Trail and Mulkey Passes. 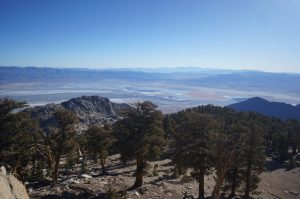 I got another somewhat lazy start, heading straight across Horseshoe Meadow to intercept the Mulkey Pass trail where it starts to climb. It seemed much less-used than Trail Pass, with large sections faint or washed out, and no recent footprints. At the pass, I turned left on the PCT, heading southeast toward the unimpressive and mostly forested lump that is Muah Mountain. Where the trail levels out near Diaz Creek, I headed cross-country straight for the summit, crossing another trail that is not on any maps, leading who-knows-where. The forested climb up Muah was steep but easy, with generally solid ground and little deadfall or brush. 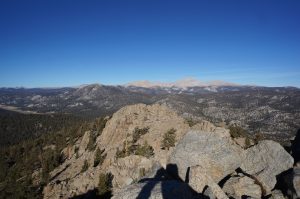 After a couple of frustrating false summits, I found myself on the small rock crest of the true summit. Mount Langley dominates the view to the north, Olancha peak that to the south; Cartago is hard to pick out, as it is merely a highpoint on the undulating eastern edge of the range. Below to the east, the dry Owens Lake dominates the view, with different parts being put to different uses (shrimp farming?). To the west I could see yesterday’s objective, Kern Peak. 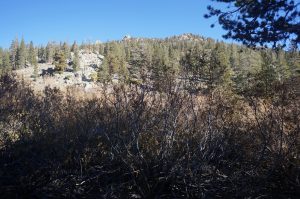 I set off south from the summit, aiming to regain the PCT just on the other side of Ash Meadow Peak. Things started out well, with a quick sand descent to Ash Creek, then turned utterly hellish as I had to thrash through 100 yards of willows and bog. Fortunately the willows were dense enough that I could walk on them, keeping my feet out of the muddy water below. After ten or fifteen minutes of cursing, thrashing, and backtracking, I reached the other side, re-entered the woods, and started heading uphill, using my phone to stay on track for the next summit. 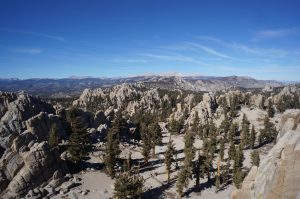 Ash Meadow Peak is similar to Muah, forested except for the very top, with the summit being one of a few small rock outcrops. I climbed a couple before finding the Sierra Challenge register left a few years earlier. Despite being only a few hundred yards from the PCT, this minor summit apparently sees very little traffic. I quickly took in views similar to those on Muah, then again headed south, soon rejoining the trail. This part of the trail is actually interesting, staying close enough to the Owens Valley to have a view sometimes, and winding through more of the region’s granite outcrops. 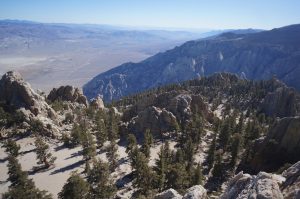 I left the trail where it leaves the edge north of Death Canyon, heading downhill through terrain that was just sandy and brushy enough to make for slow going. Fortunately I had a map and GPX track on my phone, because Cartago’s summit is one of dozens of rock outcrops poking out of the sparse woods, and it is not obvious which one is highest. As is often the case, the summit turned out to be basically the farthest pinnacle, rising perhaps 100 feet above a sandy plain. I found a bit of fun third class scrambling for a change, and a couple of familiar names in the register. There were also some ancient scraps of paper dating back to the early 1970s, miraculously preserved in the metal canister.

To the south, Cartago Creek drops nearly 6000 feet through a mess of granite outcrops and spires, with Olancha Peak behind it rising over 8000 feet from the valley floor. While I had plenty of daylight, I was mindful that I had around 13 miles left to get back home. I jogged some of the easier cross-country, slogged up the sand-hill to the PCT, then managed a decent pace on the gentle and frequently runnable terrain back to Mulkey Pass. Though I returned to the car by mid-afternoon, it was already getting chilly at nearly 10,000 feet, so I rinsed the dust off my legs quickly before heading down to Lone Pine. With dramatically colder weather and up to a foot of snow forecast for the Sierra later in the week, these could be my last Sierra peaks for awhile.