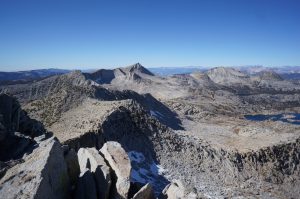 These two remote SPS peaks, on either side of Seldon pass, were the reason I had suffered the brutal road to Florence. While Senger is an unremarkable pile of sand and talus, Hooper has an impressive east face and a non-trivial summit block. Bob had intended to tag both in one trip when he climbed them many years ago, but uncharacteristically ran out of energy and had to make two trips. Fortunately I was able to them in a single trip, sparing myself the need to repeat the long approach. Curled in my bag waiting to sleep, I read through Bob’s trip report on my phone to see if there was anything non-obvious about these peaks. I was glad I did this, as it informed me of the old trail leading from the Muir Trail Ranch directly up to Sally Keyes Lakes. This shortcut saved me a great deal of time and frustration plying 2500′ vertical of Jolly Manure Trench switchbacks. 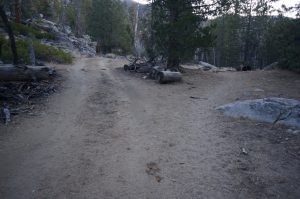 It had not cooled off overnight as much as I had feared, and the stars were out as I made my headlamp start on the long hike around Florence Lake. The trail crossed the San Joaquin River on a nice bridge, then very slowly gained elevation on the way east, passing below North Rock on the way toward the Ranch. I was surprised to find a jeep road paralleling the trail, with tracks indicating recent use, since I had not seen any road leading there from the west side of Florence. Perhaps cars can drive across the dam, or there is an old truck stuck at the Ranch, with fuel brought in by mule. 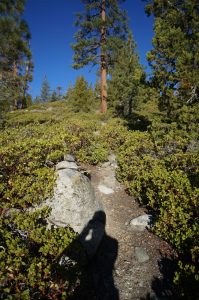 I found the shortcut trail exactly where Bob had described, and had no trouble following the line of cairns to the base of the manzanita-choked hillside. I had expected a use- or game-trail, but believe it had actually been built, as it passed two old signs indicating the wilderness boundary. This trail stayed well west of Sally Keyes Creek as it climbed steeply toward the lakes, becoming indistinct once it entered the woods around 9400′. Fortunately I was recording my track, because the trail is much harder to find on the way down, and the off-trail brush is savage. 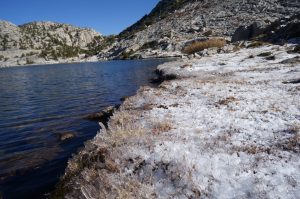 The previous afternoon’s snow had melted off lower ground and the south-facing slope I was climbing, but a dusting remained in the meadows above 10,000′. I thought I was almost at the pass after passing the three lakes, but it is another 800′ past (yet another) Heart Lake and up to a narrow cleft. The high plains around large Marie Lake were nearly solid white, and snow of course clung to the north-facing talus fields. Bob had mentioned time-consuming boulder-hopping getting to Senger in fresh snow, so I decided to attack Hooper first, giving the sun more time to do its work. It turned out not to make much difference, as there were similar amounts of slow talus on the way to both summits. There were also some small, rock-hard snowfields left over from the winter, which gave me more trouble than they should have. 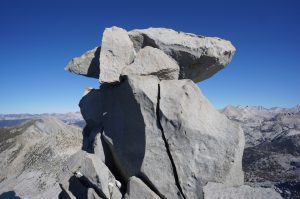 I reached Hooper’s south-southeast ridge well above its lowpoint and, after playing around on the fourth class crest, dropped down onto the easy sand and boulders of the south face. Reaching the summit rocks, I briefly checked out the 5.4 crack on the front, then thought better of it and went around to the easy backside step-across. Gemini, Seven Gables, and the high peaks around Lake Italy rose impressively to the east and north, while Senger looked disturbingly far away on the other side of Seldon Pass. I plotted a course that would minimize boulder-hopping, then retraced my route to the pass. 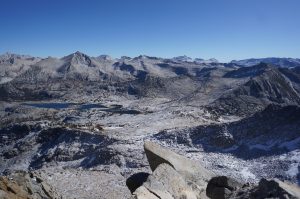 I managed to stay mostly on snow-free slabs, much more efficient than the snowy talus, then wasted time dealing with steep brush and boulders trying to bypass 12,068′. Unlike Hooper’s, Senger’s summit is a broad plain whose highpoint is not at all obvious. I walked over to several potential summits, found no register, then took off down the sand in a straight line for the Sally Keyes Lakes. The descent was mostly easy travel, with surprisingly little nasty brush lower down in the woods. 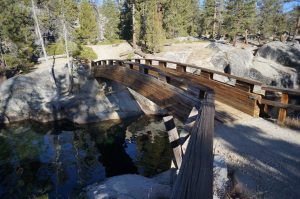 I emptied my shoes out at the trail, then jogged it for a short distance before heading cross-country to find the shortcut trail. I found a line of cairns higher up, lost the trail by sticking too close to the creek, then used my track to find it again before I got into any real trouble in the manzanita. I felt energetic enough to put in a respectable jog along the San Joaquin, but found it hard to maintain good speed or mood on the spitefully-rolling, horse-ravaged trail around the lake. I returned to my camp in the picnic area just before the headlamp hour, made myself hot glop and a boiling thermos, then settled in for another long night.

Seven Gables and Gemini from Hooper