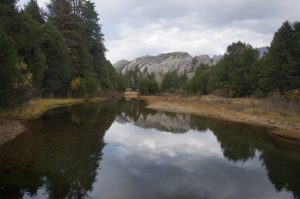 Having succeeded in reaching a cold elevation, yet failed to reach my next trailhead, I waited for it to get warm enough for my hands not to freeze while riding, then got an inefficiently late start toward Kaiser Pass and Florence Lake. The pass was another 2000′ of climbing, starting out on a good two-lane road that narrowed to 1.5 gradually deteriorating lanes. I was glad to spend the first part of the morning going uphill, giving things a chance to warm up enough for my hands not to freeze going downhill. 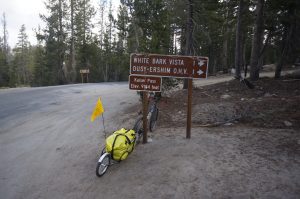 I stopped for a photo at the pass, then descended the rapidly-worsening road toward Edison and Florence Lakes. The pavement was almost worse than dirt, consisting mostly of potholes and frost heaves. Checking on the trailer periodically, I realized that I had not tightened the nut on the hinge between its fork and body enough, and the constant bumps were slowly loosening it. This seems like a flawed design in two ways: first, this is the only part of the trailer that cannot be assembled with a 4mm Allen wrench, instead requiring two pairs of pliers; second, unlike a quick release, the tiny nut on the bottom of the skewer can work its way loose and fall off. Fortunately it loosened very slowly, and I caught it in time; I quickly got in the habit of checking the nut every morning and after rough sections of road, and tightening it as much as I could with my fingers. 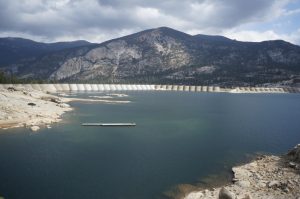 While I paused on a steep descent, a young woman in an old car wearing camo stopped to ask what I was doing on a bike way out in the middle of nowhere. I explained I was just touring, and she oddly wondered if I were worried about dangerous wild animals. Having spent plenty of time in Canada and Montana, where such things actually exist, I found her concern strange in the tame Sierra. Continuing on, I fetched some water from a roadside stream, grateful for my new insulated rubber gloves, then jounced on to reach Florence Lake a bit after noon. 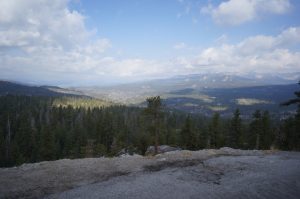 I spoke to some fishermen for awhile, then stashed my trailer in the day use area, looked at my map in an unsuccessful search for water less polluted than the reservoir, then pulled up Peakbagger to find a nearby bump I could climb to kill the rest of the day. I settled on Jackass Dike, a slabby fin downstream from the lake. It was close, short, and I would pass by some potential water sources on the way. I biked over to Jackass Campground, which was of course closed, then followed the dirt road leading past the diversion dams and tunnels used when building the Florence Lake dam, giving up where the road fords the reservoir’s outlet stream. The stream was slow, swampy, and downstream of the reservoir, and a sign along the road warned that the water was unsafe to drink without boiling. So much for an easy source of good water… 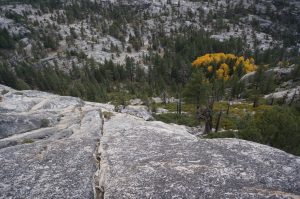 I locked my bike to a tree, then headed off through a dispersed camping area along the stream, finding a nearly-complete roll of toilet paper on a branch. I made a mental note to booty this, then continued on game trails through the meadows and woods toward the dike. I knew nothing about the peak, but assumed I could figure out a route. The first crux was finding a path through the manzanita and oak-brush surrounding the base; I hiked along the edge of the woods perhaps halfway along, then thrashed uphill to the base of the slabby side. 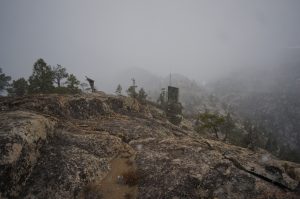 With some false starts and a bit of backtracking, I found a third class route to the crest, where I saw that the highpoint was obnoxiously far away, and the weather was deteriorating. As I made my way through a couple of undulations, I kept an eye on the snow slowly swallowing Florence Lake and the peaks to the east. I thought of turning back, but the storm did not look too bad, and I had only one more gap to cross. This proved trickier than the others; after a bit of exploration, I found a fourth class route to the left that led back to the top. Another 5-10 minutes of hiking through a snow flurry led to the summit, home to an unattractive radio repeater. 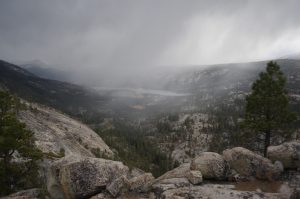 I found no register or cairn, though I did not look very hard in the snow and wind. I made a couple false starts before finding the fourth class downclimb on the way back, cliffed out trying to take a different route down the side, then found a worse way to thrash through the brush at the base. However, once in the woods, I found a better game/use trail for my return. I bootied the toilet paper, then rode back up to the day use area, worried about how cold it would be that night. Surprisingly, I did not have the lake to myself: a small group of rednecks who may have been out boating pulled their trucks into a picnic spot on the other side of the woods and started a lively campfire. However, they kept their distance and were not too loud, and I was tired, so I had no trouble going to sleep at dusk, with my alarm set for an unpleasant pre-dawn hour.