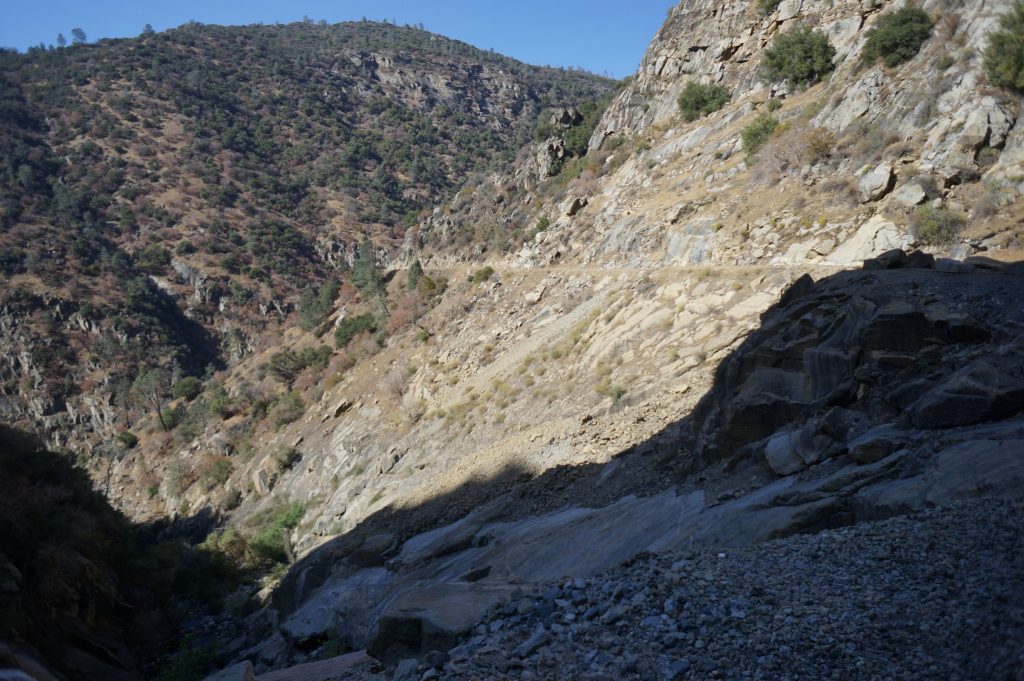 I had been carrying my bike and BOB trailer around in back of my car for awhile, setting them outside each evening to make room to sleep; now it was finally time to put them to use. I stashed my car on a forest road off Beasore Road, where it would hopefully not be vandalized or towed, then spent much of the morning assembling the trailer and packing. My goal for the day was to ride to Florence Reservoir, deep in the mountains near Seldon Pass. Maps.me plotted a route that was a bit under 80 miles which, in a ridiculous and uncharacteristic turn of optimism, I thought I could do in a day. As it turned out, 80 miles and over 10,000′ of elevation gain with a full trailer is far more than I can manage. Also, maps.me’s routing was seriously messed up, taking me on one road closed for construction, then another closed to all but maintenance vehicles. Fortunately I was on a bike, so both errors worked in my favor. 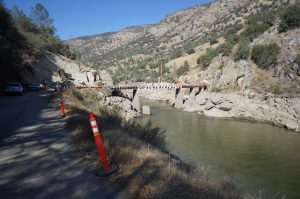 After a quick descent to Bass Lake, during which I got used to how my bike handled with 50 or so pounds of trailer attached, I made my gradually-descending way south and west, past the Geographic Center of California (whatever that means), to the Italian Bar Road along the north side of the San Joaquin River. There were almost no cars on the road, no wind, and temperatures were comfortable in shorts and a t-shirt. As I descended into the river valley near Redlinger Lake, I passed a sign saying the road was intermittently closed — Uh, oh… — then spoke to the driver of a Jeep going the other way, who said that the road was definitely closed at the bridge — Oh, crap… — but suggested I might be able to get through, as it was a weekend and no one should be working. 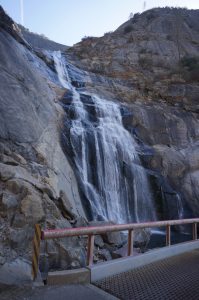 It turns out that a small road crew was working on a Saturday, but one member was happy to escort me across the bridge, which was under some sort of construction. From there, at a lowly 1600′, I enjoyed a gentle climb along the river on more car-less road, eventually reaching a split at a switchback. Stopping to check my map while shooing away face-flies, I found that I should head left, on a gated road that continued along the river. I was once again glad that I was on a bike, as the road is only open to pedestrians, bikes, and utility workers accessing the various dams and power plants along the river. I disassembled my setup, passed the bike, trailer, and dry bag over the gate separately, then reassembled them and continued west, pedaling hard to outpace the face-flies. 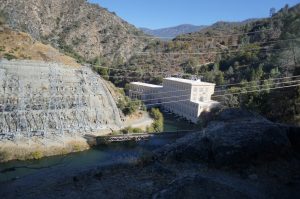 This was one of my favorite parts of the trip, riding a car-less road blasted into the steep granite walls of the San Joaquin River valley. The (type I) fun ended at Dam 6 Lake, where the road forks and begins climbing in earnest. I took the right fork, which averages about a 10% grade for several miles. Here I learned two things: (1) I had to walk my bike on anything steeper than about 11%; and (2) the face-flies could keep up with me in my lowest gear. I never felt them bite, or even land on me; they apparently feed solely on human misery, of which they had a bountiful harvest. I finally reached the upper gate around 4500′, once again disassembling and reassembling my rig in a swarm of face-flies. 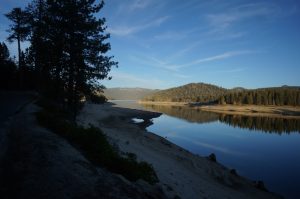 Back on normal roads, I encountered the occasional car on the more gradual climb to the power plant at Big Creek. It was hot and I was out of water, so I stopped to see if I could find a hose bib or restroom. Unfortunately the visitor center was closed for the weekend, and the grounds were all watered with greywater. I was debating whether to knock on someone’s door — I was thirsty and a long ways from camp — when a man and his daughter walked by. The daughter, who apparently had Down’s Syndrome, sat down nearby to play in the grass, and the man was curious enough to talk for awhile. I learned that he was a triathlete, had lived in Houston for awhile, and now lived in Big Creek and worked for the power company. He told me that the various dams and generating stations I had passed were all built in the early 1900s to power the trolley lines of Los Angeles. Eventually his wife came by and, learning that I was looking for water, went back to their house to fill a gallon jug. I drank some, then filled all my receptacles, sensing that sources of water might be few and far between on this side of the range.

The man had warned me that the next section (the “Beaver Slide”) was a tough climb, and I soon found myself intermittently pushing my bike again, though at least there were fewer face flies at this elevation. It was about a 2000-foot climb to Huntington Lake, which I reached just before sunset. The houses around the lake were half empty, the campgrounds all closed, but that was fine by me. I pulled into one of the closed campgrounds, made dinner, made myself a thermos of boiling water to help stay warm at night, then threw my dry bag in one of the bear boxes before crawling into my sleeping bag for the long night.

Road along the San Joaquin