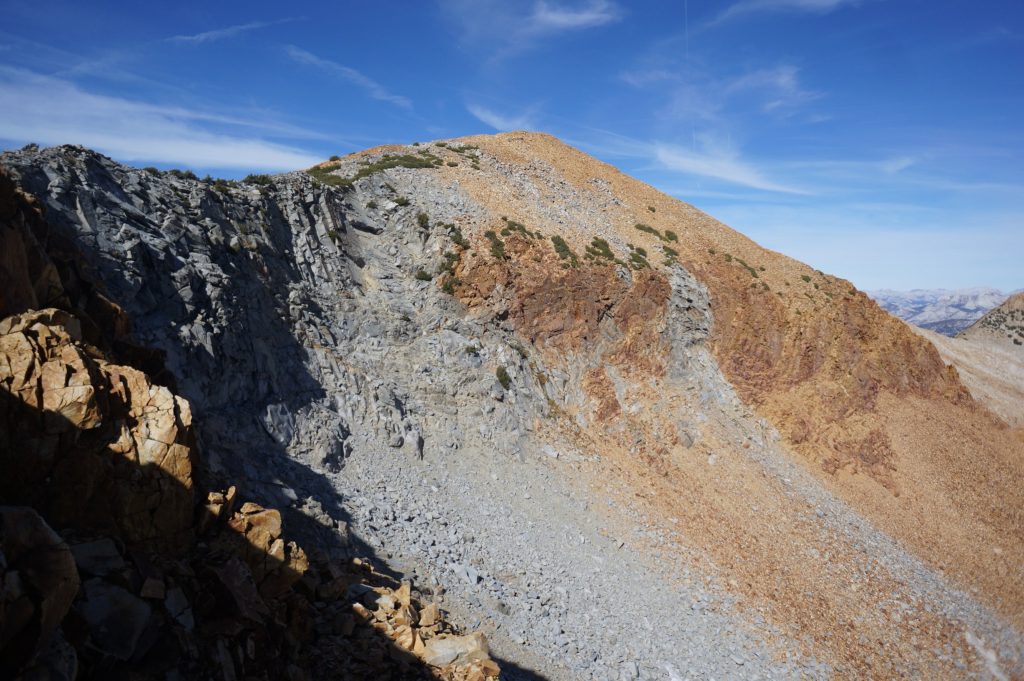 Red and Merced are two SPS peaks at the southern end of the Clark Range in the high country of southwest Yosemite; Ottoway is a minor bump that gets in the way between them. I had hoped to add neighboring Gray Peak, finishing off a cluster of unclimbed SPS peaks in the area. However the long approach, short days, and an ugly ridge between Red and Gray led me to summit only the southern peaks, saving Gray for another day. 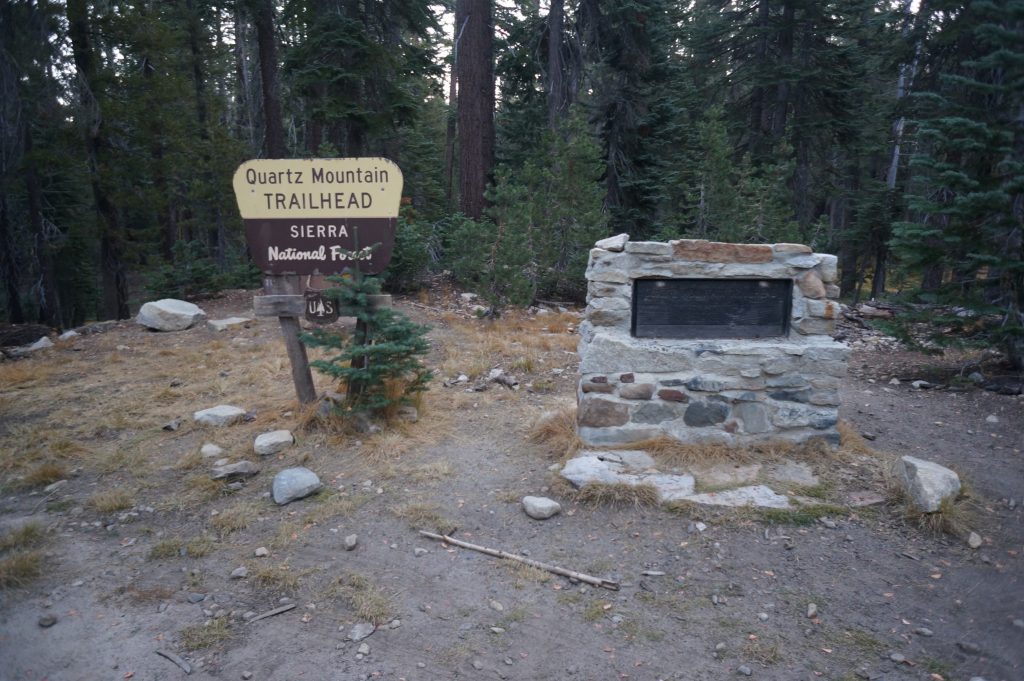 Expecting little to no cell phone coverage in the western Sierra foothills, I was using the maps.me app for Google-free offline maps and route-planning. (I still carry my red De Lorme Atlases, but owning a smartphone has made me lazy and stupid.) While its underlying OpenStreetMap data is generally complete and accurate, it is not flawless, and the app itself sometimes makes bizarre route choices (more on that later). Sometimes they lead to interesting things, but not this time: I wanted to reach the Quartz Mountain trailhead, buried deep in Sierra National Forest south of Yosemite, and instead of the nice Beasore Road, maps.me directed me up Sky Ranch Road, which starts out decent and gradually deteriorates, finally turning truly wretched as it passes through an active logging operation. I dismissed my initial plan to do some of this by bike, and slowly drove my long-suffering car to the lonely trailhead, arriving just before dark. 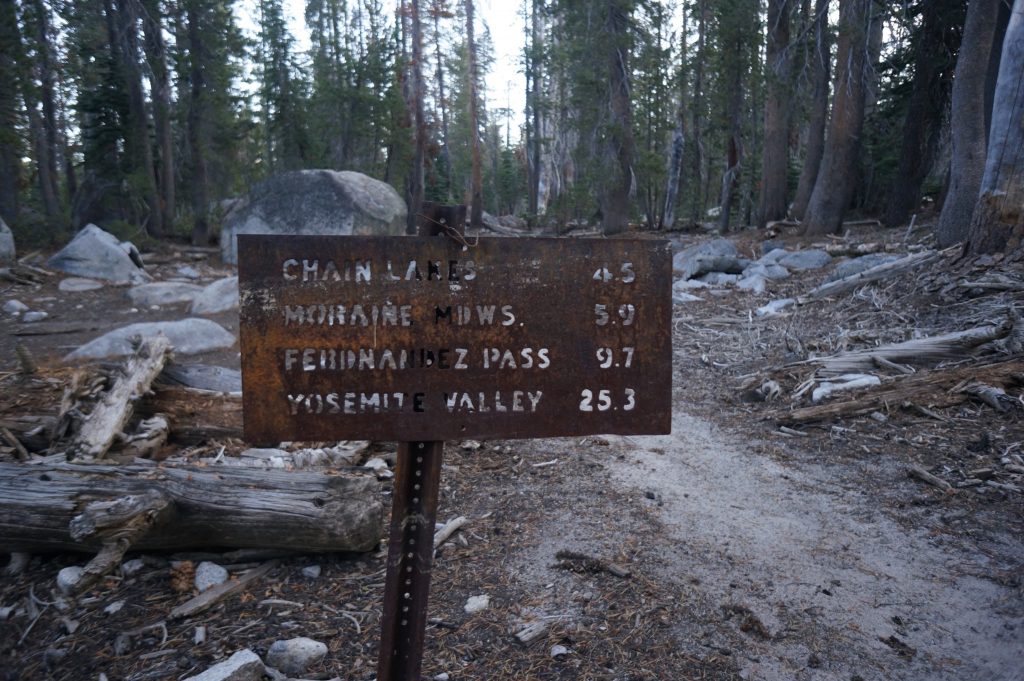 I started at a reasonable hour the next day, jogging the sometimes-vague Forest Service trail down to the fence at the park boundary, then hike/jogging the rolling approach to Merced Pass. Fortunately OSM has good trail coverage, because this area was too far from my chosen peaks to be included in the USFS maps I had downloaded, and there are a mess of trails in the area leading to unfamiliar lakes, meadows, and passes. Fortunately most of these trails remain in good shape and easy to follow, though I can’t imagine many people use them. 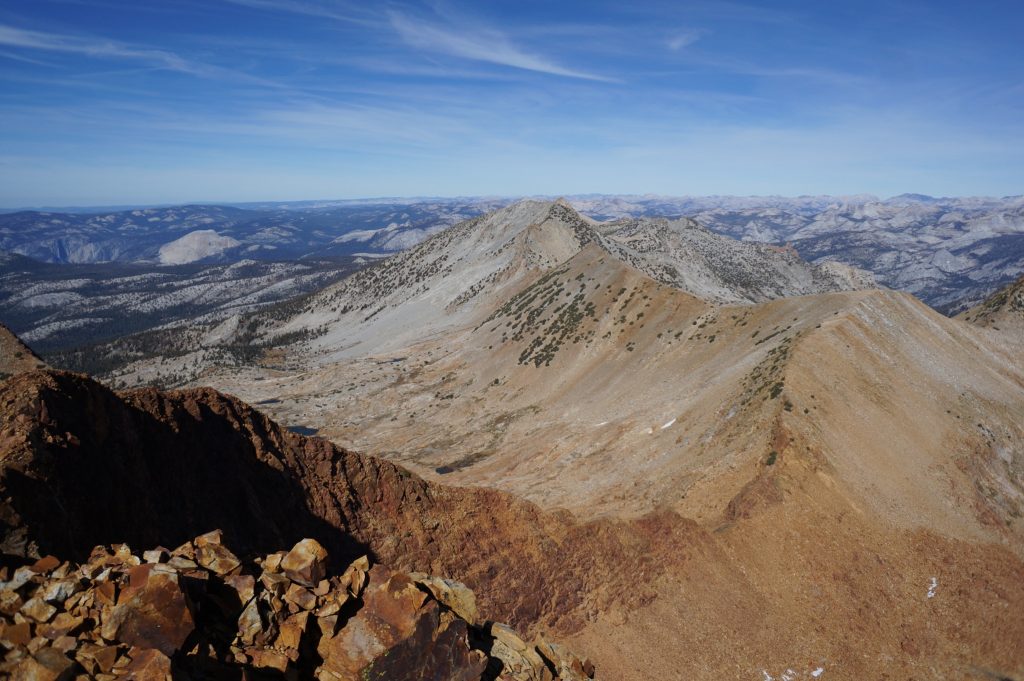 After hike-jogging miles of rolling, forested terrain, I made the gentle climb to Merced Pass, then did my best to run the rocky descent to the Red Peak Pass trail. On the long, gentle, 2000-foot climb past the Ottoway Lakes toward the surprisingly narrow and hidden pass, I began to realize that I would not have time or energy to tag Gray Peak, which would involve a multi-mile out-and-back from Red. I left the trail at the base of the final switchbacks, slogging up some red talus toward the peak. I found a surprising amount of ridge between where I topped out and the summit, but no difficult climbing. 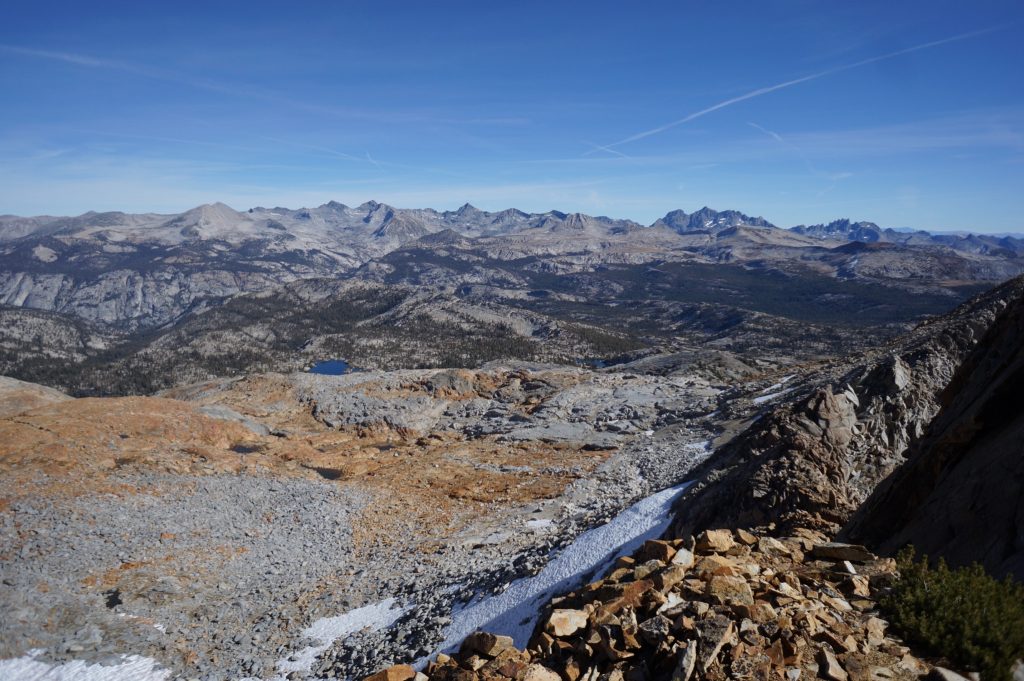 From Red’s summit I had a clear view of the Ritter Range to the east, mostly rolling forest to the west, and Red and Merced Peaks to the north and south, both looking depressingly far away. Since Merced was at least in the right direction, I signed the register, vowed to come back for Gray, then headed south. Attempting a slightly higher line on the return, I ran into some surprising cliffs just before the pass, which forced me to backtrack a bit before finding a class 3 way through. I took a high line across the bowl above Upper Ottoway Lake, then returned to the ridge near Ottoway Peak, a minor bump on the ridge which I tagged before following the ridge to Merced. 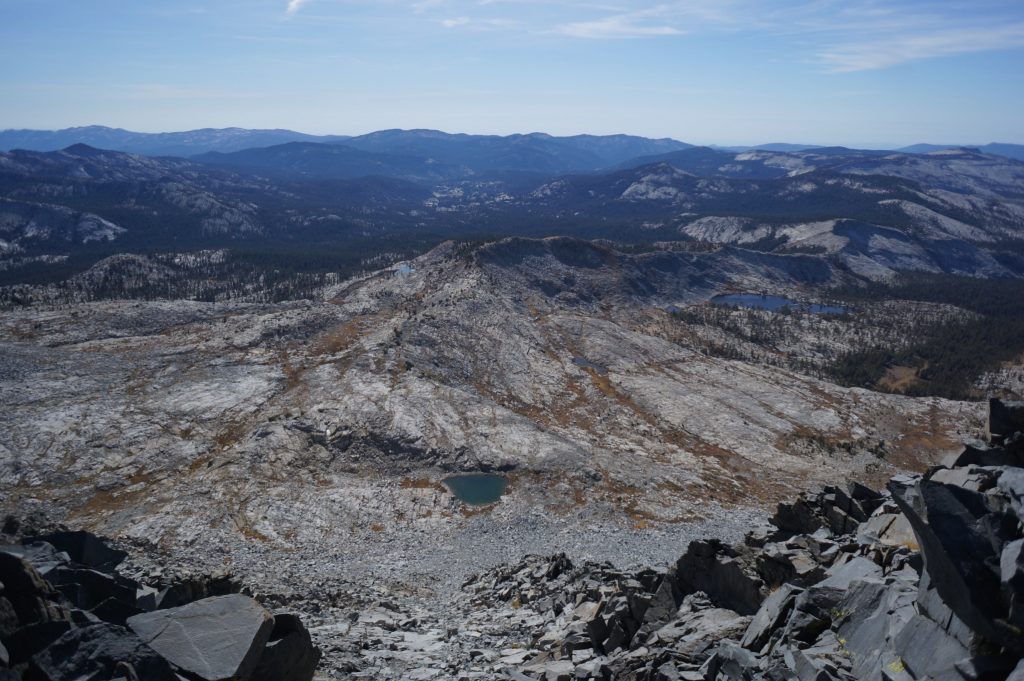 From the summit, I studied the several drainages to the south, then took the one to the south-southwest, which seemed to offer the easiest path to the Fernandez Pass trail. After an initial scree-and-talus descent, I had a long walk through meadows (thankfully dry this late in the season), slabs, and mostly-open woods, eventually stumbling out onto the trail. I jogged what I could of the long trail back to the car, briefly taking a wrong turn just past the National Forest boundary, where the spur trail to Quartz Mountain is faint.

My original plan had been to bike from here to the trailhead for Foerster Peak, but given the unpleasant roads, I chose to drive instead. Rather than returning the way I had come, I aimed for the Beasore Road, finding gradually-improving dirt mixed with bad pavement, then excellent pavement with a center line (!!) and even a bit of traffic at Beasore Meadows. Rather than driving west to the trailhead, I foolishly decided to sleep in the parking lot there and ride to the trailhead in the morning. This proved to be the first of two fatal mistakes: while the morning ride was scenic and manageably cold, it took more time than I expected. My second fatal mistake was to try to take the Timber Creek trail to Sadler Lake. This trail turned out to be long-abandoned, nearly invisible, and plagued by brush and deadfall. With a mid-morning start after my 20-mile ride, I realized I had no chance of reaching the peak, and gave up a couple hours in. Defeated, I returned to the car, then drove down the nice pavement to near Bass Lake to start the main event.

Weird gap on the way to Merced