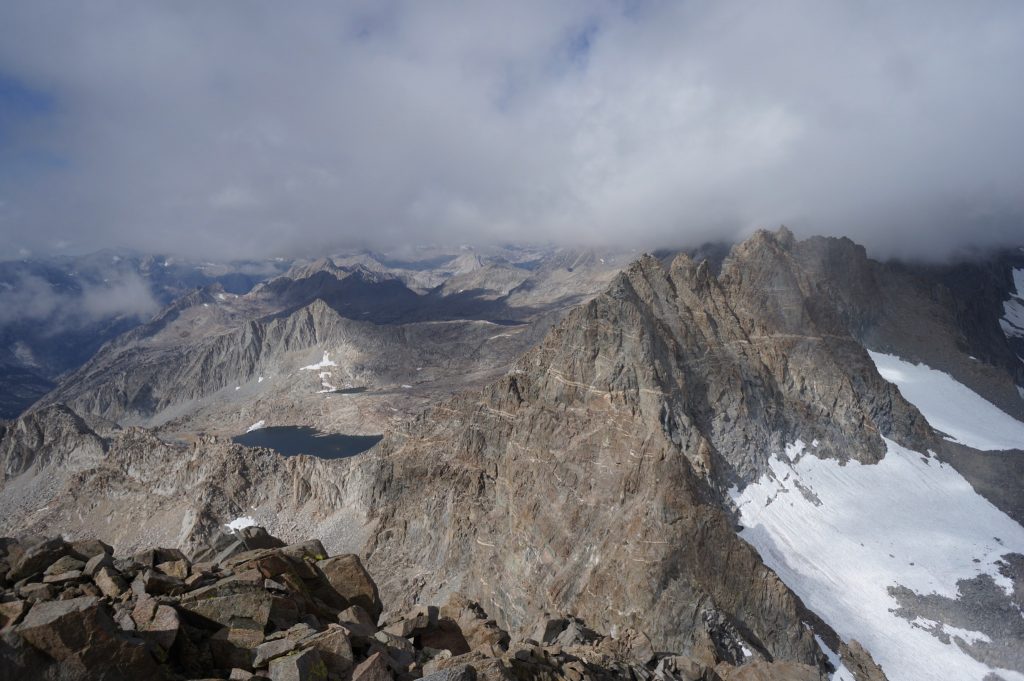 For the last several years I have found early August better spent elsewhere than the Sierra, meaning that I have missed Bob Burd’s Sierra Challenge. The peaks have become increasingly obscure since he finished the SPS list, but one that I regretted missing was Mount Williams, a minor but challenging summit in the Palisades between Norman Clyde and Palisade Crest. I had hoped to do it with a friend, but that fell through, so as the season drew to a close, I headed down to Glacier Lodge for a few days of chilly, challenging scrambling. 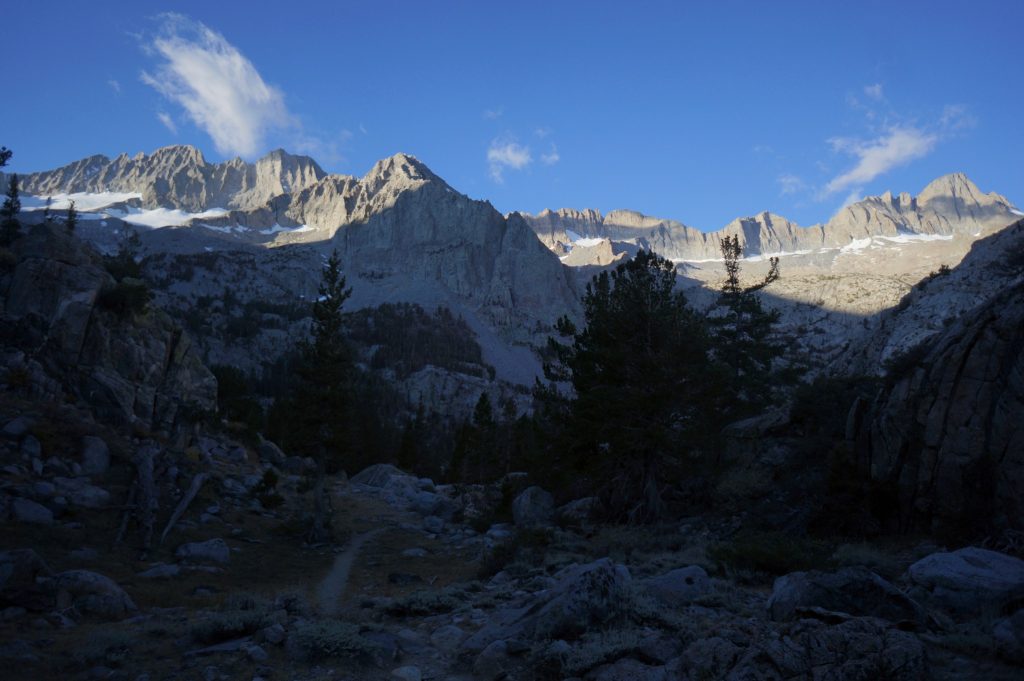 Not wanting trouble, I slept in the overnight lot, leaning my bike box against the back of the car to give myself room to sleep, then drove up to the day lot to start hiking. I waited until I could see without a headlamp, then started out in all my layers. I immediately met a man from Alaska, who had come south to escape the endless winter. Though we started in the same direction, he intended to fish Big Pine Creek, so I soon left him to hike up the south fork. I have always enjoyed this approach: there are few people and no horses, it conjures fond memories of my early Sierra adventures, and the sunrise view of Norman Clyde Peak is always impressive. I was fortunate to be on a pleasant trail, because my recent level of activity had left me with energy for little more than a respectable walk. 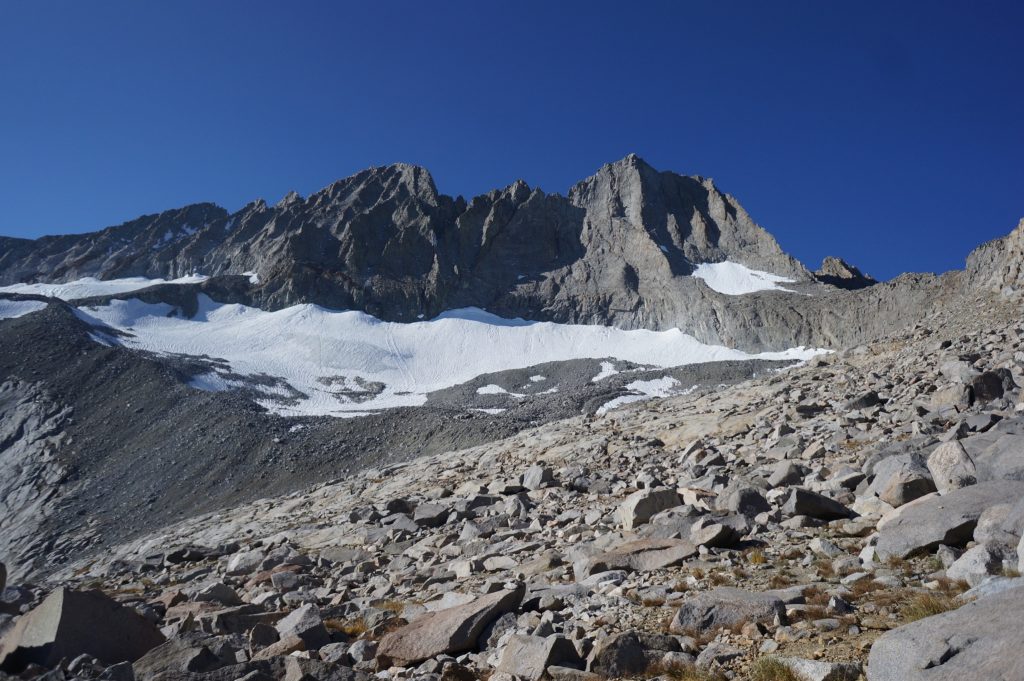 Once past the Brainerd/Willow Lake split, I looked for and found Bob’s shortcut to Finger Lake near where the trail leaves its outlet stream. While I disagree that it is a “decent use trail,” the route was obvious and mostly painless, saving me distance and frustration, if not much time, in reaching the lake. I refilled my water, then followed the increasingly-cairned route up around Firebird Ridge toward the Middle Palisade Glacier. The glacier’s healthy state, with almost no bare ice visible even at the end of the season, cheered me as I approached it, then turned right to zig-zag up some steep third class leading toward Norman Clyde’s north face. 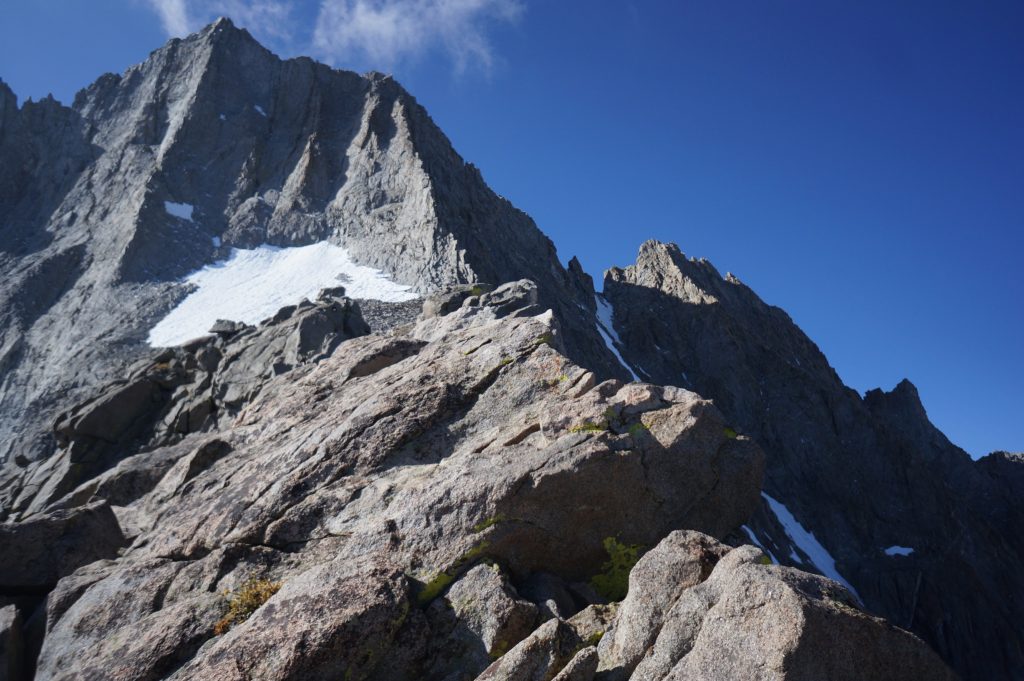 Like Bob, I started on Clyde’s standard route, then made a diagonal traverse toward the notch before Williams. I found mostly easy terrain most of the way, though things got trickier as I went up and around the fingers of the snow/ice couloir leading to the saddle. These were fairly steep, and rock-hard due to being permanently shaded this late in the season. Kicking steps was impossible, and chipping steps with a sharp rock would have been treacherous. Fortunately most of the fresh snow from a couple of weeks ago had melted or blown off, so the rock was almost all dry. 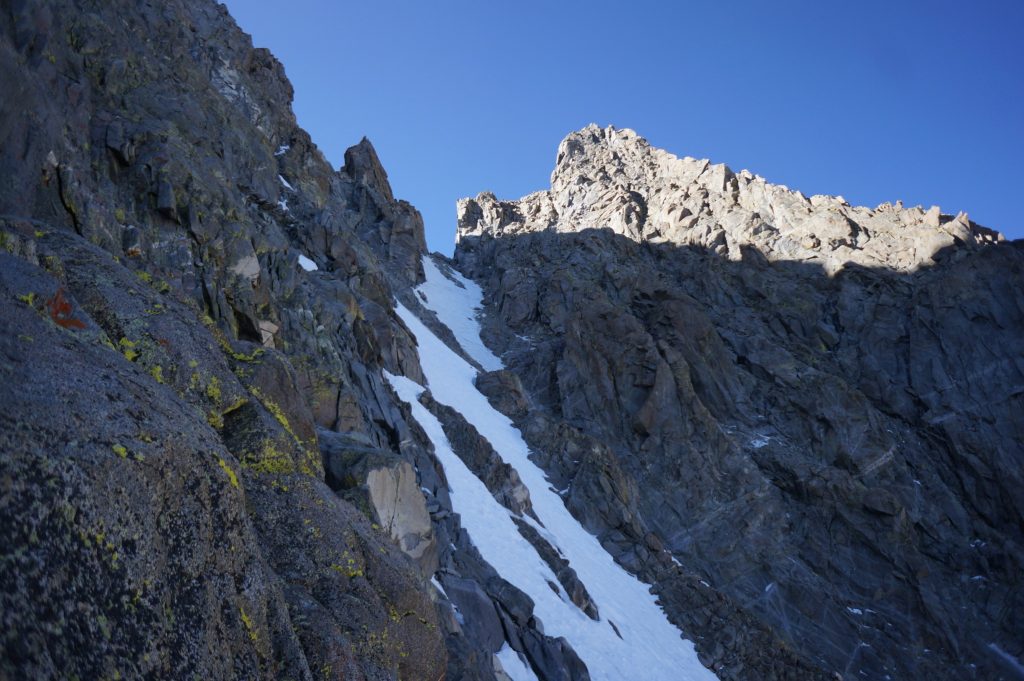 I finally reached the ridge at the southern saddle, where someone had built a tent platform. The chockstone mentioned in Bob’s trip report was still wedged in the dirt-chute to the west and, not remembering whether he went under or across, I went across, aiming for the less-windy eastern side of the ridge beyond the northern saddle. This turned out to be a mistake, as I had to do some slow, windy, tricky downclimbing to get past the pinnacle separating the two notches. The east side of the ridge was steep and sometimes rotten, so after passing the first false summit, I gave up and climbed the windy side. The whole ridge was complicated on the sides, jagged on top, and often loose, and between that and the wind, I was not enjoying myself. 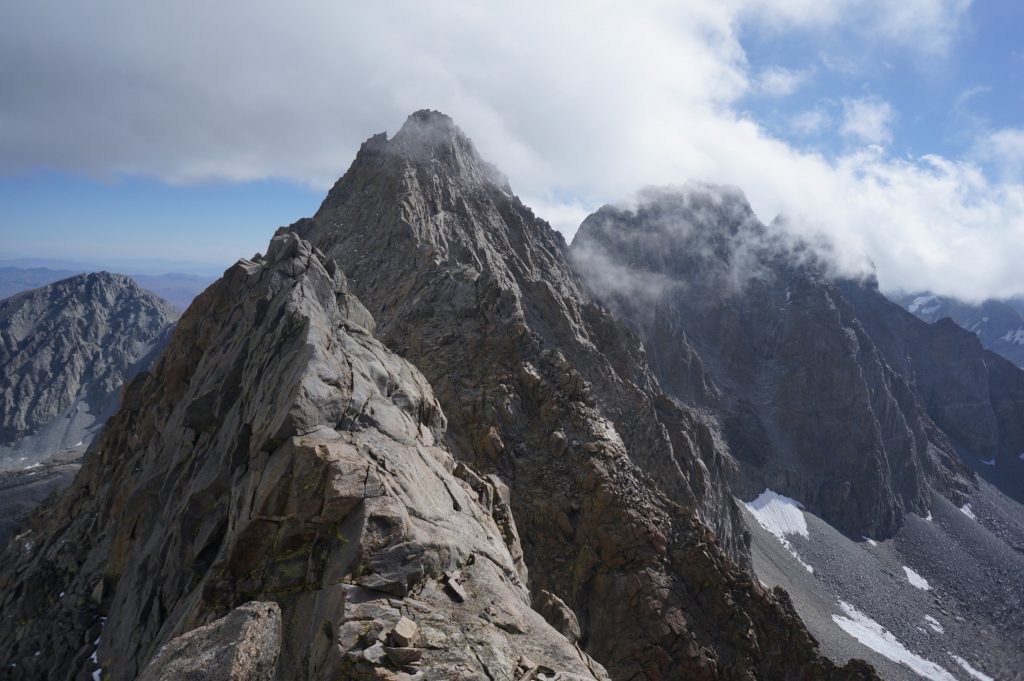 Williams has two possible summits, and I visited them both, later finding that the first is probably slightly higher. I did not find a register on either, probably because I took only a few seconds to look in the blasting wind. Broken clouds were streaming up the west side of the crest, partly obscuring Norman Clyde, Middle Palisade, and Sill. I stuck to the windy side on the return, dropping down below the notch to come up the dirt-chute below the chockstone. Each time a rock broke loose, the dust it released would blow up the chute and into my eyes. Looking down, I was surprised to see that my water hose had frozen — I knew it was cold, but did not think it was that far below freezing.

I had a bit more trouble getting down and across Norman Clyde’s face, at one point having to cross one tentacle of the icy couloir via a deep powder-filled depression. However, at least I was sheltered from the wind. Once back on Norman Clyde’s standard route, things went quickly, and I was soon hopping down the talus toward Finger Lake, destroying some of the cairns that have multiplied there over the years (there were none in 2007). I took the Bob shortcut again, then finished at a pathetic jog, passing the Alaskan at the South Fork stream crossing, where someone has nailed aspen branches into a primitive bridge.

Weather to the west