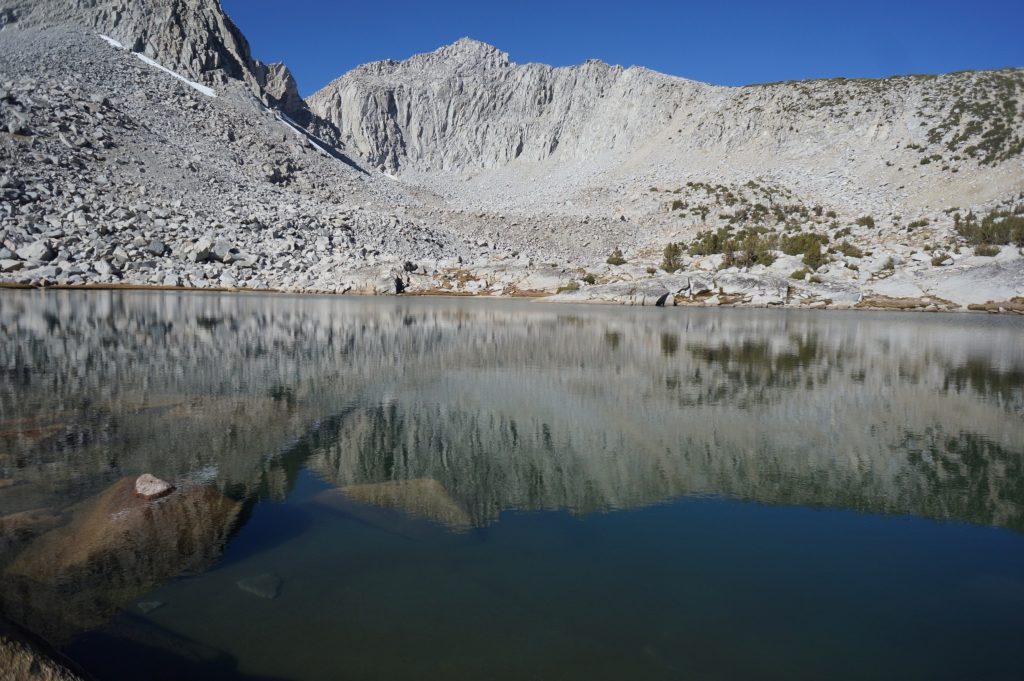 These are three unremarkable peaks on the west side of Pioneer Basin, located between Rock Creek, McGee Creek, and the Mono Recesses. I have spent relatively little time in this part of the Sierra, and had never visited Pioneer Basin, so it seemed like a worthwhile outing while I was on top of the hill. Thanks to Halfmoon Pass, which I used last fall to tag Recess Peak, this was a reasonable outing of about fifteen miles taking less than seven hours. Fortunately I glanced at Secor before starting, something I don’t always do for easy peaks, because his description of Hopkins as a “class 1 sand hill” prompted me to reverse my planned course, ending my peak-bagging with a joyous 1300-foot sand-run. 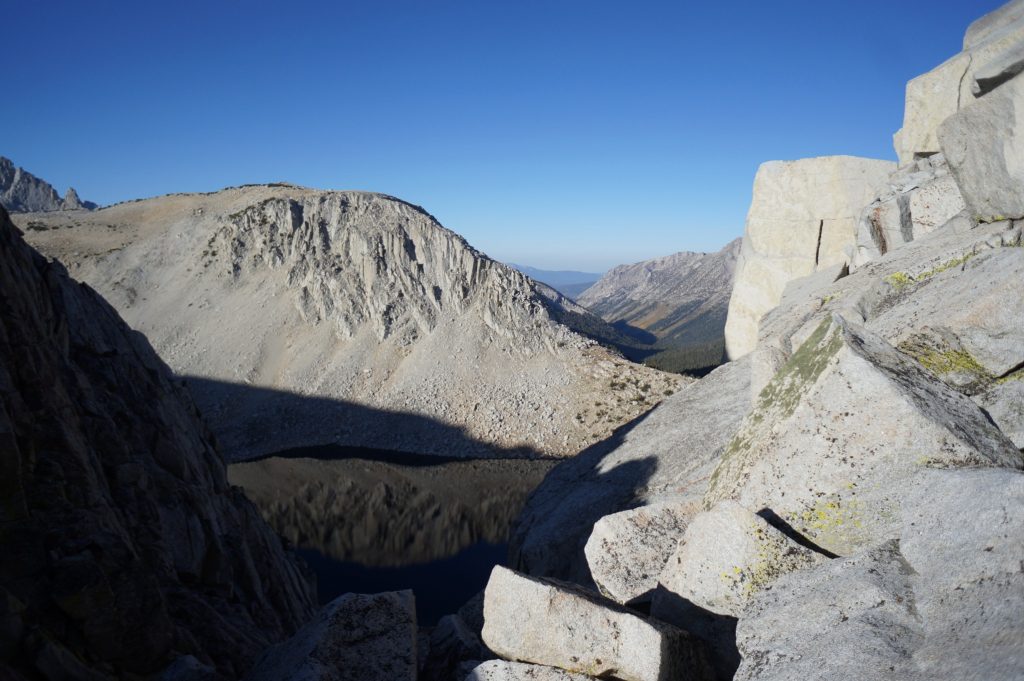 I spent another cold night in the Mammoth area, this time off a side road near McGee Mountain, then drove up Rock Creek with my heater on full blast. I waited for the sun to reach the car, then started up the trail behind the pack station around 8:00. I easily found the use trail to Halfmoon Pass, which starts out very well-defined, and was soon comfortable in just an overshirt as I climbed the east-facing bowl toward the ridge. The other side was of course chillier, but the descent to Golden Lake and traverse around its right side went quickly, and I was soon jogging down the hideously-switchbacked and horse-ravaged Mono Pass trail. 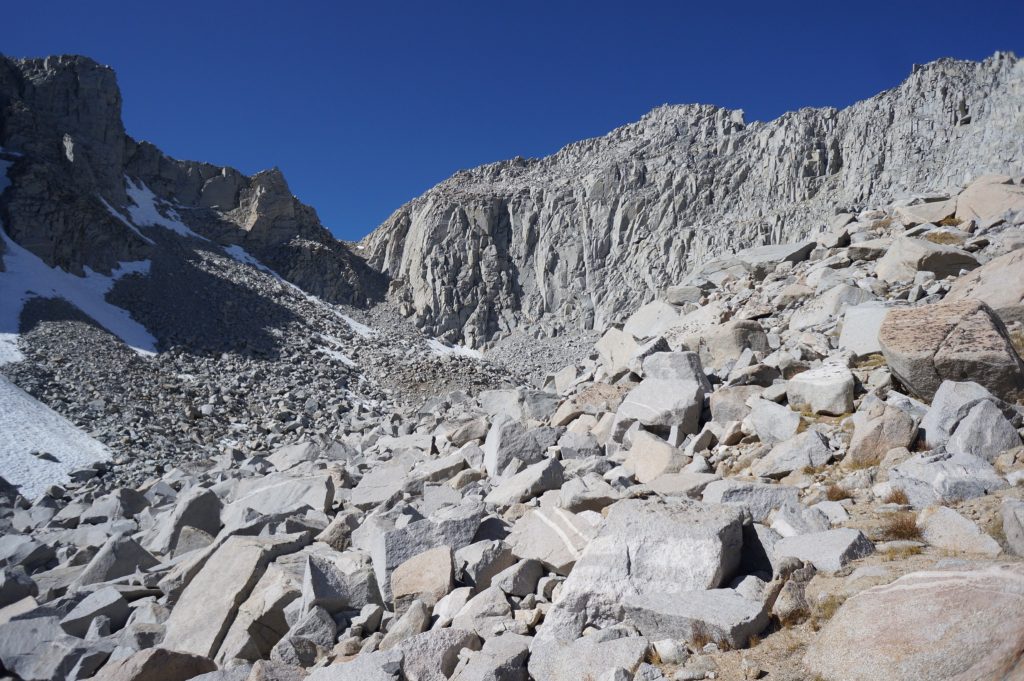 Just past the turnoff to the first Mono Recess, I turned off on the trail to Pioneer Basin, which also sees a fair amount of stock traffic as far as the first lake. The trail rapidly fades beyond, going in and out of existence above the second lake, and finally ending before the last two. Pioneer Basin features some annoying scrub pine, but is mostly open, gentle, and easy travel. I examined the ridge I would traverse as I hiked and jogged up the basin, eventually spotting Crocker Col, a nasty-looking chute just before Mount Crocker. 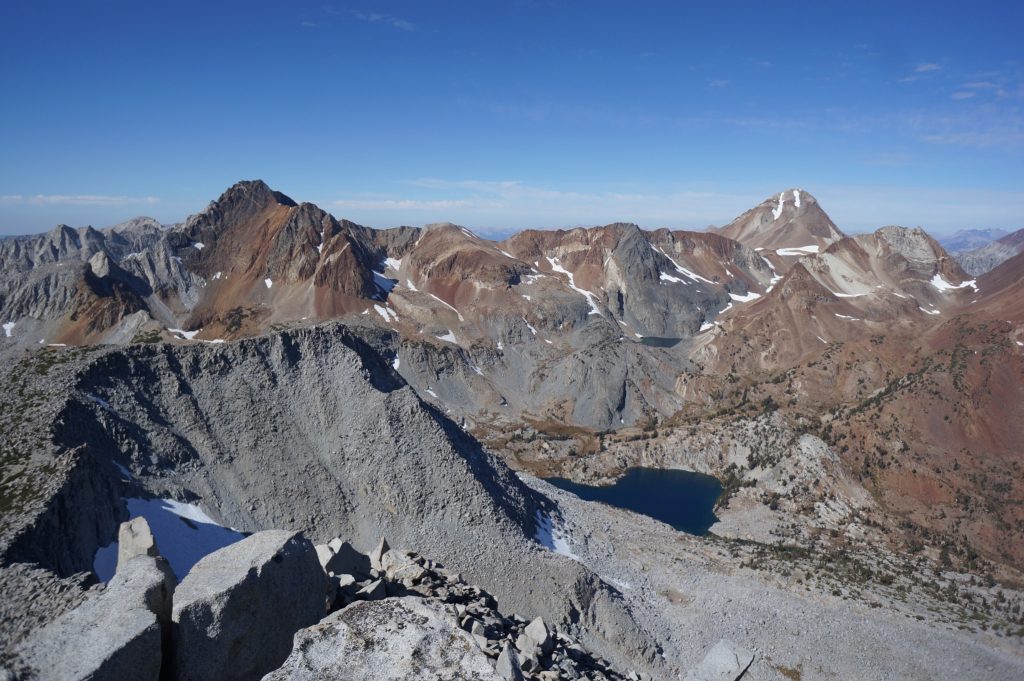 While the approach to the chute was an arduous boulder-hop, the chute itself was actually pleasant, with stable talus on the right-hand side, and I was soon at the ridge, looking down into Hopkins Creek and across at Red and White Mountain. I stayed on talus left of the ridge to avoid the wind, finally climbing a short class 3 section to reach the summit. I could see the rest of my day to the south, but the view in the other direction across McGee Creek was much more interesting, the typical white Sierra granite sharply interrupted by the colorful red and black choss intrusion south of Mammoth. 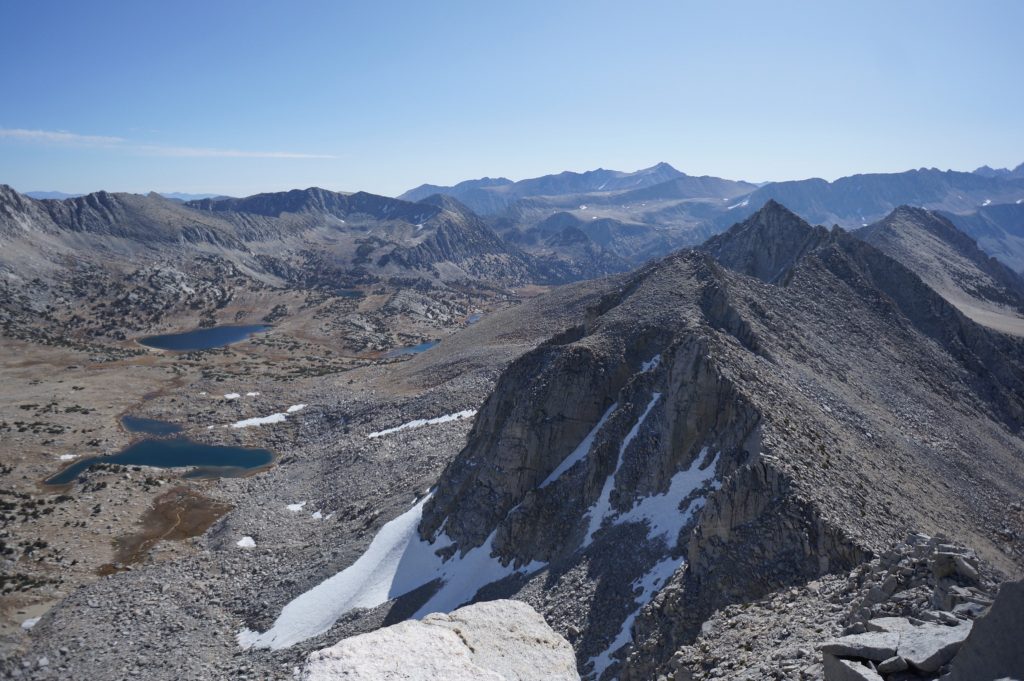 The ridge to Hopkins is about 1.5 miles long, and gentler on its west side. I traversed around the first bump, then stayed closer to the ridge approaching Robber Baron. Several gendarmes and side ridges forced me into some class 3-4 climbing that offered the day’s only real challenge. I continued slowly on or right of the ridge, eventually reaching the summit, about halfway distance-wise to Hopkins.

The remainder of the ridge was much easier, with a quick sand descent to the saddle, then stable talus to the final summit. Of the three register canisters — a custom PVC thing, a peanut butter jar, and a pill bottle — I chose the peanut butter jar, which most people seemed to have been using. I added my own to the list of mostly familiar names, then checked out the other two. The pill bottle’s book was empty — I have no idea why someone left it — while the PVC thing held an old, faded book dating to 2005. 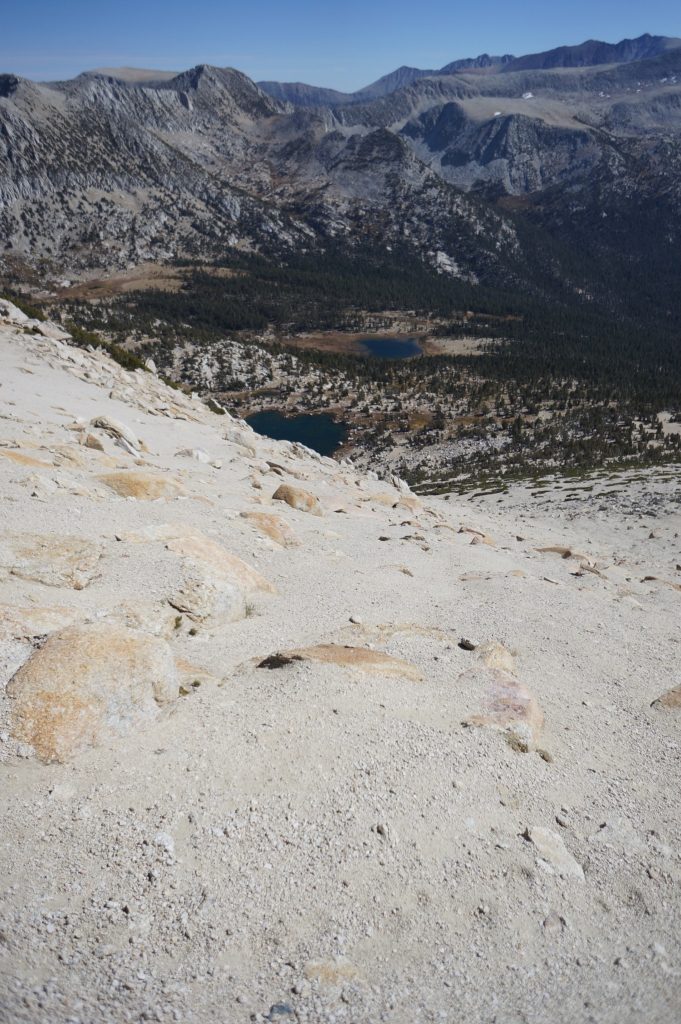 I could see almost my whole route home from the summit, down 1300 feet of sand to the second lake, then back along the Pioneer Basin, Mono Pass, and Golden Lake trails to Halfmoon Pass. After a bit of talus and decomposing granite, I had a perfect sand run down to the lake, where I emptied my shoes and got some more water. From there, I jogged as much of the rocky, screwed-up descent as I could, then slogged my way back up the valley, around Golden Lake, and up the chute to Halfmoon Pass. The use trail on the other side grows fainter higher up, so I found it much harder to follow on the descent. I repeatedly stopped to check my GPS track when I found myself diving into willows, costing me some time. The stops were worth it, though, as the lower trail is much more runnable than the surrounding woods. I jogged through the manure the packers spread on the lower trail, then walked through the pack station to my car, ticking one more unexplored Sierra valley off the list.