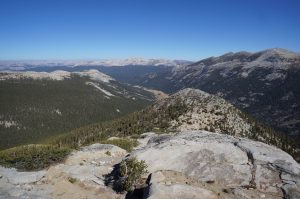 I hadn’t seen Renee in awhile, so when she said she would be in the Sierra for the next couple of days, I tried to figure out an outing that would work. With her coming from Tahoe and me from Lone Pine, anything would involve a lot of driving for at least one of us; a peak in Yosemite seemed like a good compromise. I did a short day up Meysan Creek, then made the long drive north, stopping for gas and groceries in Bishop before heading into the Expensive Zone. 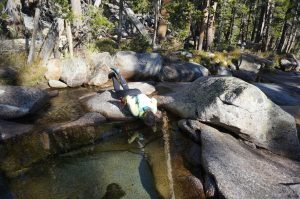 I had enjoyed warm weather and clear skies in the Owens Valley, but noticed some brown-looking clouds as I drove up toward Mammoth. As I neared the gap in the Sierra that gives the ski area its snow, I entered a horrible haze of wildfire smoke, with visibility only a couple of miles. The fire, in Mariposa on the west side of Yosemite, had closed down parts of the park, and made Renee’s scrambling day somewhere between unpleasant and unhealthy. We met at the Mobil station, stared at maps and Secor for awhile at the Mobil station, then said “what the heck, why not Amelia Earhart?” It is an easy peak that neither of us had done, not too far from Tuolomne, but otherwise unremarkable; a suitably unambitious goal for a day forecast to have brutal ridgetop winds and possibly choking smoke.

Tuolomne can be a cold trailhead late in the season, so we left the Mobil Mart a bit after 7:00, and started around 8:00. Though it had frozen overnight, temperatures were surprisingly pleasant as we jogged the first part of the Lyell River trail, then turned off toward Vogelsang Pass and Ireland Lake. The Lyell River trail sucks, but having good company helped, and I soon found myself in new territory climbing up toward the lake. The toe of the ridge leading to Potter Point looked steep, so we continued to its west, then turned off-trail to climb through easy forest and slabs to the crest. 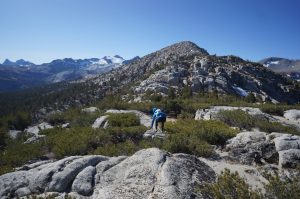 Potter Point is not really a peak, but merely the end of a ridge leading north from Amelia Earhart, so we walked over to what looked like the highest bump, then retraced our steps south. The first part of the ridge was typical Tuolomne-area fare: a mixture of nice slabs, decaying granite, sand, and krummholtz. The wind was beginning to pick up from the west, and the crest was brushy, so I took a path on the eastern side that proved efficient. 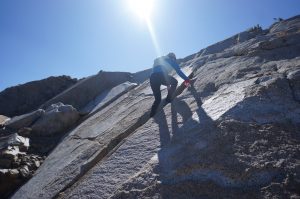 The rock changes to gray ramps and talus closer to Earhart’s summit, with the eastern side steepening to a glacier-carved cliff, so we were eventually forced onto the crest and into the wind. We could see a layer of smoke to the west, probably from another fire farther north in the park, but fortunately the air remained reasonably clear where we were. I found the register, then quickly took it to a small, sheltered alcove east of the ridge to have a sandwich and dig through its contents. The ammo box unfortunately contained only sheets of loose paper and an empty snuff can. To the south, the Lyell Glacier looked healthy after last winter’s heavy snows, with no visible bare ice. Ritter and Banner rose to the southeast, with the latter looking more impressive from this angle. 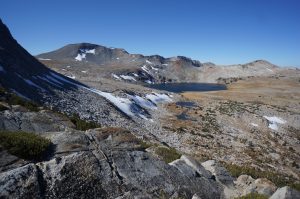 We had thought of continuing south along the ridge to Simmons peak, but with our late start and Renee’s long drive home, decided to call it a day. We dropped east down some large talus, then pleasant slabs, then less-pleasant woods, reaching the Lyell River trail just above its endless flat section. The Lyell “River” is more like a long, skinny lake, barely flowing north to join the Tuolomne. With a strengthening wind blowing from the north, it appeared to have reversed course, and I wondered if water were piling up below the headwall, ready to unleash a flood when the wind stopped. 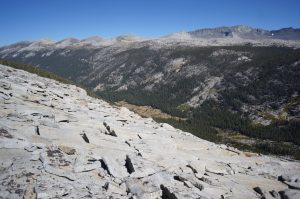 I did not feel that we had gone very far in the morning, but the Lyell trail seemed endless. It is a hateful sand-trench through trees, slightly downhill on average but rolling as it winds along the side of the canyon. I have done it three times now — once hiking, once jogging by headlamp, and now jogging by day — and all of them have made me swear to never do it again. While I have been running my descents lately, including most of the ten miles down Shepherd Pass, this modest seven or eight miles of flat running had my knees complaining more than any other recent outing. Finally reaching the parking lot, I noted that the outing was just under 21 miles — long-ish, but shorter than it felt. We ate and talked awhile in the parking lot, then Renee headed home, while I drove up to Saddlebag Lake to reload my pack, write, freeze, and sleep.