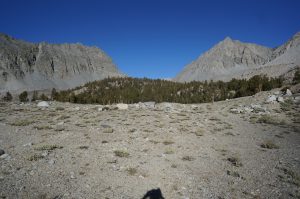 Little Lakes, Ruby Finch, and Pyramid Peaks are part of a line of summits between Mount Morgan and Bear Creek Spire, with Morgan Pass threading between Little Lakes and Ruby Finch. All are normally reached from the nearby 10,000-foot Mosquito Flat trailhead. However, I chose instead to climb them from the other side of Morgan Pass, starting at 7600-foot Pine Creek. Someone might come from this side of the pass because he is:

I filled in the bubble for number 4, then took off around 6:45, walking the paved road past the gate and up to the ugly Tungstar Mine. 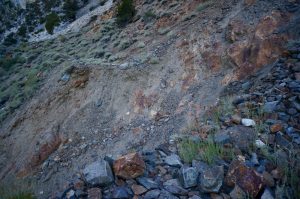 Most of the “trail” to Morgan Pass is a long-abandoned mine road, covered in debris and completely washed out in three places. The first two are fortunately near a switchback, and therefore easily bypassed by a steep use trail. At the third, one must cross the washout, whose sides are steep hard-packed dirt with insecurely-embedded rocks, reminding me of the Canadian Rockies’ treacherous moraines. I found an easy way into the ravine about 20 yards uphill, then climbed the bottom a bit farther until I could carefully third-class my way out on rocks embedded in the dirt. 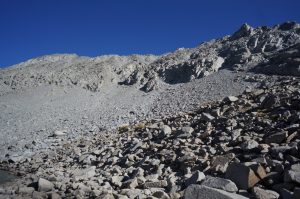 Above, the road was even fainter, with almost no human footprints; clearly the washout has hurt Morgan Pass’s popularity. However, there was adequate traffic and signage to find the place where the trail leaves the road, passing the Lower and Upper Morgan Lakes, plus a small cabin, on the way to the pass. Studying Little Lakes Peak from the trail, I decided to head cross-country at the outlet to the uppermost Morgan Lake, then climb a talus chute that seemed to lead to the summit without any cliffs. It would not be aesthetic or fun, but it would get the job done, and I still had miles to go. 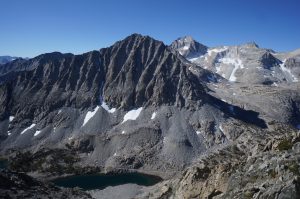 The chute was actually a bit more stable than I had feared, so although I frequently had to stop to catch my breath, I emerged near the summit in a reasonable time. I found the register, protected by a large inverted coffee can, then sat down in the lee of the summit rocks to and have a snack. The ridge leading to Morrison looked tedious, but it seems that most parties do it, and it is apparently only class 3. After my break, I talus-hopped and slid my way down, got some water at Upper Morgan Lake, and followed the trail for a hundred yards before taking off for Rosy Finch’s north ridge. 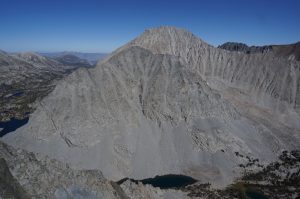 I expected this to be the day’s highlight, with a supposed class 4 rating and good reviews from Bob and others. While there was very little class 4, the ridge was indeed fun, with quality class 2-3 scrambling and manageable levels of loose rock. Weirdly, there seemed to be remnants of an old survey station on top — I would not expect surveyors to have climbed a class 4 peak, particularly one that is not a local highpoint. 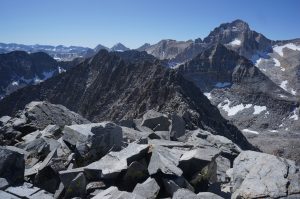 The ridge to Pyramid looked long and gnarly, and I knew nothing about it, but I was in a surprisingly good mood, so I found it enticing rather than discouraging. I started out hopping around and down large blocks, finding mostly class 2-3 climbing with a bit of class 4 there and there. Approaching the unnamed intermediate summit, I found some fun knife-edge sections, and a few towers that required a bit of low fifth class climbing to get down the back or around one side. 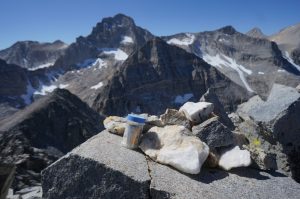 Reaching Point 12,640+’s quartz-strewn summit, I was surprised to find a register in an old peanut butter jar. The sun-rotted lid shattered when I tried to unscrew it, so I sacrificed my empty sandwich bag to protect the contents. There were perhaps 1-2 visits per year to this point, including several people traversing to Bear Creek Spire. I have climbed the peaks around Little Lakes Basin individually, traversed from Ruby to Mills, and even (mistakenly) soloed most of Bear Creek Spire’s east ridge. While I gather that there are more difficulties, e.g. between Abbot and Mills, this did make me curious about a traverse around the basin from Morgan to Mono Pass. I don’t think it is well-known, but would not be surprised if Croft has done it. 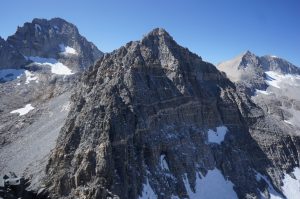 The ridge continued as an easy boulder-hop for awhile, then sharpened a bit descending to the final notch before Pyramid, which seems to be an occasionally-used pass between Little Lakes Basin and Spire Lake. The climb up Pyramid’s east ridge started with a short class 5 chimney, then relented to fun class 3 climbing with a few small towers to be bypassed. With easier routes from the west, this summit seemed the most popular of the day, sometimes acting as a consolation prize for people who ran out of energy attempting Bear Creek Spire. 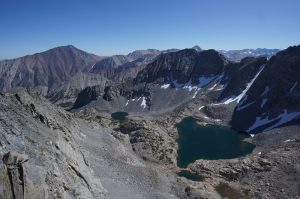 Rather than returning to the pass to the east, I continued down the ridge toward Bear Creek Spire. Although it looked gentle on the topo map, it was surprisingly tricky and time-consuming, with loose rock, many small gendarmes, and occasional short, steep steps. I was tempted to descend one of the chutes to the left, but (wisely) resisted the urge, fearing they might cliff out. Just before the broad saddle, I finally found one where I could see all the way to the bottom, and cut the corner, skipping Spire Lake entirely. 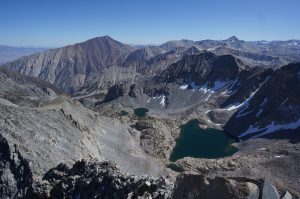 This drainage would lead to Bear Lake and rejoin the Morgan Pass road around 9600′, sparing me a loop around through Little Lakes and several miles of road and trail from Morgan Pass. It involved much talus, and took longer than expected, but I was having a good time. Fast boulder-hopping may not attract sponsors or impress the ladies, but it is a valuable and enjoyable mountain skill. Finally reaching Bear Lake, I found a couple of massive fire rings, though no use trail, so I continued down the boulders to the left to avoid undergrowth. 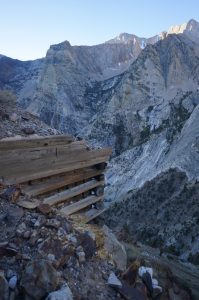 I reached the road with enough energy to jog most of the flats and downhills, and walk quickly though the ones covered in too much loose debris. Below the washouts, I met a man carrying a fancy camera, full-sized tripod, and pounds of extra lenses. He asked me if I was one of those ultra long-distance runners (“kinda…”), and told me he was hiking up to take photos of the “facility” (i.e. Tungstar Mine) from above. I didn’t understand why he would be doing that, since it is ugly at the best of times, and was already in the shade, but didn’t think to question him. Instead, I continued jogging down the road, reaching my car in a bit under ten hours, with enough daylight and warmth left to rinse off, chop up dinner, and catch up on the blog.