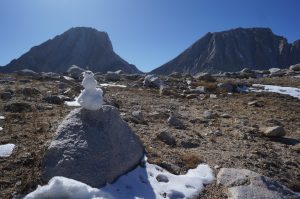 Merriam and Royce, along with Feather, form a striking line of peaks west of the large Royce Lakes, near Pine Creek. The barren granite nearby, Bear Creek Spire and Mount Humphreys rising to the north and south, and the colorful and striped rock of Pine Creek to the east make this a particularly scenic part of the Sierra. I had done all three peaks in about ten hours back in 2009, near the end of my first full Sierra summer. However, when Kim expressed interest in doing Merriam and Royce, I didn’t mind going back. She is normally faster and more ambitious, but is currently recovering from multiple injuries, including a boxer’s fracture, with which I can empathize for obvious reasons. Unlike me, she seemed sensibly reluctant to scramble class 3-4 terrain with 1.5 hands. With my mediocre fitness and her injuries, it seemed like we would make a good team. 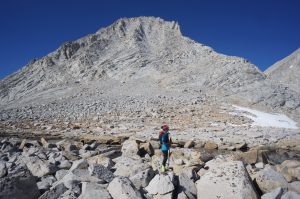 We slept at the quiet Pine Creek trailhead, and got started at first light around 6:30. Kim set a brisk pace up the switchbacks, some of which had turned into an ice-covered “anti-trail.” The temperature grew more pleasant as we escaped the pool of cold air in the valley bottom, then returned to being uncomfortably cold between the lakes and the pass. We finally met the sun a short distance below the pass, where we left the trail to head more or less straight for Merriam. 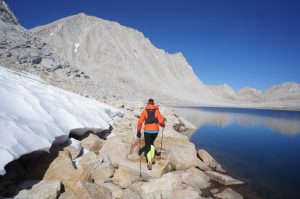 I had climbed the fun class 3 route up Merriam’s east face gully, and assumed we would do the same again. However I was not the one with the broken hand, so when Kim suggested taking the easier route via the Merriam-Royce col, I did not argue… much. We made our way between a snowbank and the southern Royce Lake, then headed toward the col, where a large snowfield left over from the big winter complicated access. The old snow was rock-hard, but fortunately some new snow from the previous week remained, and this softer residual snow made it relatively easy to walk up the snowfield without crampons. 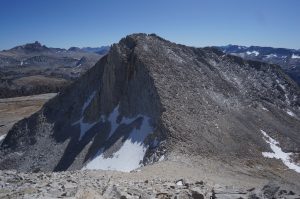 From the saddle, we wove our way up sand and large boulders to the summit ridge, then checked out a few of the bumps before finding the one with the register. It dated back to 2005, so it contained my 2009 entry, in which I mentioned reaching the summit in about four hours from the trailhead. While we had not been racing, this made our nearly five-hour time somewhat embarrassing. Lacking a pen or pencil, we stuffed the register back in its canister, then took a different and slightly worse path back to the col. 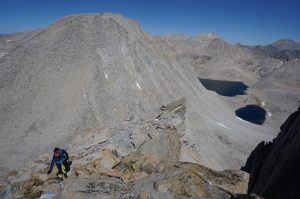 Royce was sandier, but there was a consistent boot-pack most of the way to the summit plateau. We checked out the two highest-looking piles of rocks, and I eventually found an Aspirin bottle stuffed with a couple sheets of paper lying below one of them. It was still early, so we took our time talking and admiring the views of Gemini, Seven Gables, and Hooper to the west, Humphreys to the southeast, and more distant Darwin, Goddard, and McGee to the south. For the first time in awhile, I had brought summit fish (sardines in mustard), and to my surprise, Kim actually appreciated them. My summit fish are normally an effective way to have the summit to myself. 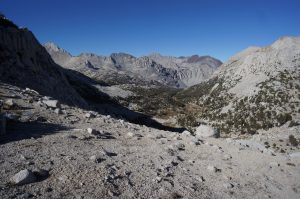 We eventually started down, plunge-stepping down the boot-pack, then carefully downclimbing the snowy col. Other than one bone-headed navigational error trying to shortcut Pine Creek Pass, the return was uneventful until near the trailhead, where we ran into some friends who lived nearby, out walking their dog. Talking on the way down, I was surprised that the man (Dan) recognized me as Dr. Dirtbag, something that has only happened a couple times in the past decade. Living nearby, he was familiar with all sorts of obscure peaks and routes, and he gave me some ideas for how to spend the next few days out of Pine Creek. We continued talking in the parking lot, slowly getting colder until I cried “uncle” and retreated to my car for my down jacket. I had just enough time to make a late dinner, reload my bag, and talk over hot chocolate before trying to get some sleep in preparation for another dawn start.

Lake SW of Merriam and Royce