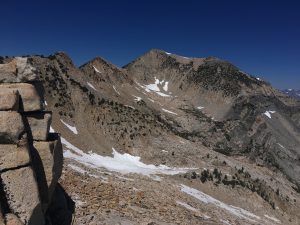 There are many Silver Peaks; this one is an unremarkable and relatively inaccessible summit in the middle of the Sierra southwest of Mammoth Lakes. The standard approach seems to be from the west, starting at Lake Thomas Edison, but it is only slightly farther to approach from the east. Since I was already in Mammoth for other reasons, I approached from there, via Duck Pass and an unfamiliar section of the JMT. Thanks to a crossing of the low Cascade Valley, and a wrong-trail issue, this involved about 35 miles and just over 9000 feet of elevation gain. I knew this going in, but was still surprised at how tough the day felt. 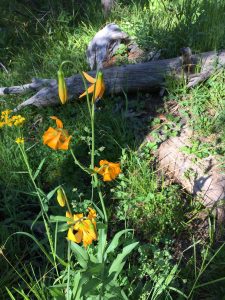 I got a comfortable night’s sleep in the woods outside Mammoth, and a lazy start near Lake Mary a bit after 6:00. Setting the day’s theme of losing to the trail maze, I soon realized I was on the wrong trail, paralleling Duck Pass a quarter mile to the right. Course corrected, I hiked the maddeningly flat switchbacks to the pass, then took off jogging around large and scenic Duck Lake. The PCT/JMT traverses above the Cascade Valley here, so there were a few tents near the lake’s outlet, and I began seeing a steady stream of through-hikers as I jogged the traverse to Purple Lake, which is not at all purple. 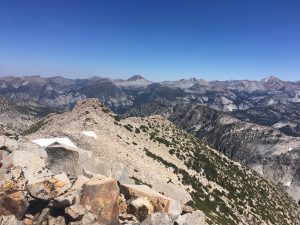 While the PCT continues above the valley, I needed to be on the other side, so I left it to drop about 1500 feet to Fish Creek, then slowly gain it back on the other side, on a trail following Minnow Creek. Fish Creek was more of a river, and the flat valley bottom was swarming with mosquitoes and black flies after the wet winter. I found a usable but precarious log-jam about 100 yards downstream, and slowly struggled across while alternately grabbing branches for balance and swatting the hordes of mosquitoes. 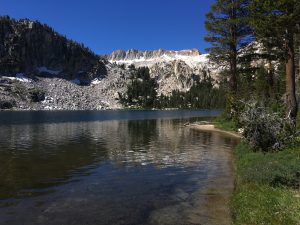 Other than drawing a GPX track to download the relevant maps the day before, I had not paid much attention to the route, so I passed a signed turnoff to “Iva Bell” (hot springs, it turns out, not a dome) without much attention, lost in my angry music and dark thoughts. The mosquitoes remained relentless as I passed though Jackson Meadow, swarming me when I stopped to wring out my sock after slipping at a stream crossing. At a signed turnoff to Olive Lake, I pulled out my map, and realized that I had traveled quite a ways up the wrong valley. As usual, my first response was to curse at having made a long day even longer through stupidity and inattention; fortunately I had the valley to myself. Looking briefly at the map, the best plan seemed to be to take the trail to Olive Lake, then traverse west somehow to Silver. 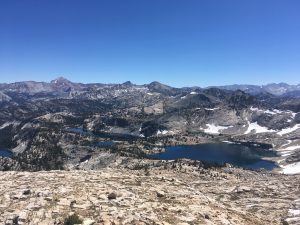 Other than the mosquitoes, which attacked again as I got more water at Olive Lake, the valley was pleasant and easy. I eyed the terrain as I climbed toward the Silver Divide, and thought it looked easiest to gain the right-hand ridge just below the Divide. Once on the ridge, I saw that it would be faster to descend a bit and traverse the high bench at the head of Long Canyon, rather than following the ridge. There was still a lot of snow hanging around on the northeast slope, but it was soft enough at midday to cross without much trouble. I dropped down to about 10,800′, then regained the ridge at the final saddle before Silver to climb its southeast ridge. 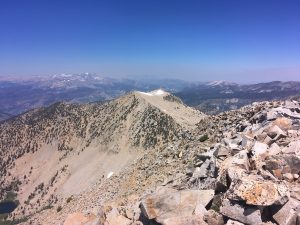 Reaching the summit after some unremarkable class 2 scrambling, I was pleased to find an old Doug Mantle register from his first trip through the SPS list, and surprised to be the first visitor this year. It was about 12:30, and I had told Renee I would meet her back in Mammoth by “mid-afternoon.” That clearly was not happening, but if I followed the correct trails and jogged, I could at least be slightly less late. I ate my last food, took a few photos, and started for home. 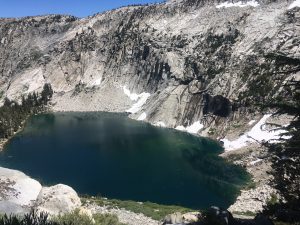 Getting down to Beetlebug Lake was tricky, as it is surrounded by steep walls and nasty brush. I dropped to the small unnamed tarns, then traversed above the brush to the left until, via some slab shenanigans, I dropped to the lake near its outlet. The Long Canyon trail was surprisingly faint, and I found and lost it several times on my way back to the “Iva Bell” junction. I mercilessly shortcut the trail down to Fish Creek, then decided to ford it instead of using the logjam. This was probably faster, but I made the mistake of keeping my pants on, soaking them in the thigh-deep “crux” of the crossing. It was a hot day, though, and the water was not too cold, so I did not mind as much as I normally would.

The climb back to Purple Lake was a grind, but the traverse back to Duck Pass went quickly. The JMT hordes were out in full force, replacing the mosquitoes at this higher elevation. I texted Renee from Duck Pass, then descended at a credible jog. I thought I would be fit after my time in Peru, but in all those weeks carrying heavy packs and moving slowly in boots, I had neglected my running fitness. Clearly a tuneup is in order.