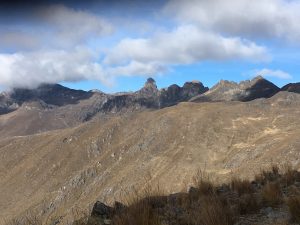 I was tired of the continued uncertain weather in the Cordillera Blanca, running out of climbing time, and too single-minded for sport climbing or “cultural experiences” like museums or ruins. I also wanted to do something with Jacob, an international Pole currently living near the northern end of the range. He had mentioned Flery Punta, a supposed peak that is supposedly the second-highest in the dry Cordillera Negra, west of the Blanca across the Rio Santo. There is almost no information on it available online: it has two different names with three spellings (Flery Punta, Carhuacocha, and Qarwaqucha), and different sources even give slightly different locations and elevations. I can find no information on who or what “Flery” is. It seemed like a fine adventure. Jacob had also recently climbed Coñocranra, the Negra’s highest peak, from a local town, and I hoped to do it in a day afterward. 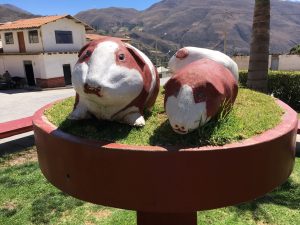 I left Huaraz at 6:00 in my most crowded collectivo so far, squeezed backward behind the driver’s seat while every other seat was taken and up to four people stood in the aisle (I believe that makes 22 people in one Sprinter). With several detours for road work, the ride to Caraz took about 1h20, mostly spent tolerating hip and knee pain from my position. The Peruvians were mostly shorter than I, but similarly crowded and stoic about it, so I tried to fit in. I eventually found Jacob and his wife at the central plaza and, after a leisurely second breakfast and some shopping, took another collectivo up a sketchy 1.5-lane dirt road to Huaylas. 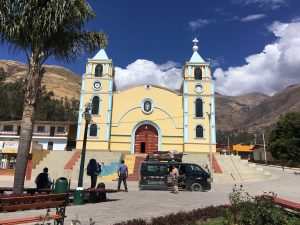 It looked like a nice town, with a central square containing the usual flowers and large church, plus a guinea pig statue and a large shrub trimmed to the shape of a rubber duck. Jacob, however, assured me that it was a terrible place, with no decent shops or restaurants, and subsequent wandering convinced me that reality was somewhere in the middle. The plan was to hire a taxi up a road labeled AN-888 as far as possible, then hike more or less southwest from there to Flery Punta’s last known location. In retrospect, it might be better to start from Villa Sucre and Ancoracá.

We tried to convince one of the moto-taxi drivers near the church to take us, but he thought the road was too rough for anything but a beat-up Toyota, and went and found an especially beat-up specimen, driven by an old man who seemed to have only one fully-working eye. He asked for an exorbitant 80 Soles to go at least as far as a supposed village; it was late and there did not seem to be other options in town, so I reluctantly agreed, and Jacob and I, the old man, and the moto-taxi driver all piled in. 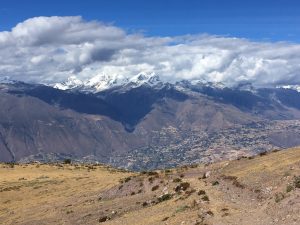 Once off the “good” dirt road between Caraz and Huaylas, the man drove his car hard, slowing to crawl over rough patches, then flooring it to get back up to maximum first-gear velocity. I noticed that the “check engine” light was constantly blinking and the temperature gauge was pegged, and got a familiar and bad feeling about the car’s future. Stopping at one turn, the driver popped the hood and the moto-taxi guy asked for a little of Jacob’s drinking water. Steam shot out as he poured the entire bottle into the radiator, and I learned that it had no cap. Oops. As expected, the car ran cooler for a few minutes, then overheated again and stopped running just below the “village,” a small collection of farm houses and fields. We paid the 80 Soles, and just nodded and exchanged glances with the moto-taxi guy as the driver claimed that his car would run fine once back down in town, and even offered to come pick us up in a few days. The short ride was expensive even by American standards, but I figured that fixing a melted engine would cost him a lot more than $28. 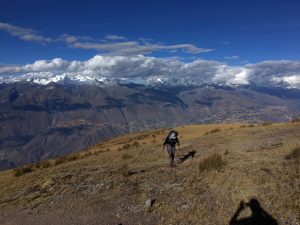 We hiked a combination of the road and cow-paths in the general direction of our peak, looking for non-spoiled water sources as we climbed from 3400 to 4600 meters. The cows had done a good job of trampling every seep into a manure-filled bog, but we eventually found one sufficiently protected by brush and rocks. While we filled our water containers shortly after hopping a fence, an old vaquero snuck up behind us and delivered a long warning and speech about a rondo. I thought it was a roundup, but Jacob informed me afterward that some cows had been stolen recently, and the community was out to find the culprit and exact frontier justice. We paid a bit more attention to our surroundings as we continued uphill. 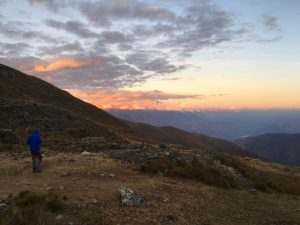 While Cordillera Negra’s eastern foothills are gentle and curved to hide the range behind them, the high peaks are steep, chossy, and complex. We reached the crest around 4500m, and could finally see one possible Flery Punta, but could not see a direct path through the intervening terrain. Fortunately, an old built-up path headed more or less in the right direction, meandering in and out of side-valleys as it traversed below the jagged ridge. We made it through two of them before finding a flat spot to camp in the third. Our source of water had been thoroughly ruined by cows, but at least it could be sterilized. We watched the sunset on the partly cloud-covered Cordillera Blanca, then shoveled in some hot, manure-enriched dinner.

On to the Flery Puntas

As usual, I spent part of the night awake, and was concerned to see an overcast sky. The day dawned overcast, with clouds seeming to come from both the Amazon to the east and the sea to the west. I was up and ready to hike in the usual half-hour, and after a bit of a fight with Jacob’s weirdly complex ultralight tent, we continued along the old trail around 7:20. It traversed another valley or two, crossed a couple of passes, then headed away from our goal to the northwest. 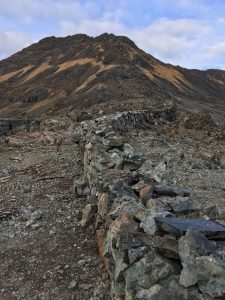 Topographic maps of this area are not detailed enough to pick an obvious path, so after looking at the local terrain, we chose to contour around the southeast side of the ridge toward our goal, following cow-paths between 4600 and 4700m. This was frustrating and slow, but likely the best alternative. After crossing some more side-ridges, we spotted another trail, again frustratingly perpendicular to our route. Following it to a pass, we found graffiti claiming that some area was the property of some woman in 2005, somewhat spoiling the place’s wild feel.

Leaving the trail on a bench just northwest of the ridge, we found some old stone shelters and bits of what might have been an old trail, now maintained by the ever-present cows. Without losing too much elevation, this route passed beneath vaguely Dolomites-like cliffs, near a drip of clean-looking water, and on to the base of the valley north of our potential Flery Puntas. I aimed for a saddle left of the coordinates I had found on Wikipedia, which would lead either to my peak, or Jacob’s another kilometer to the south. 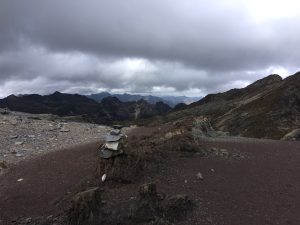 Reaching the pass, I found a view of Laguna Carhuacocha to the south, and surprising cairn. The altimeter read just below 5000 meters, finding my Flery Punta a short distance to the west, Jacob’s to the southwest and apparently lower, and a more imposing tower to the east around coordinates (-8.9543, -77.9559). Mine looked easiest, so we went there first. The summit visible from the pass was clearly higher than the southwest double summit, and lower than another a hundred yards farther west. It started snowing slightly on this first peak, dampening the mood, but we continued along the ridge to the higher western summit. I crossed a short, surprisingly overhanging rock catwalk, and built a cairn on the unmarked highpoint. 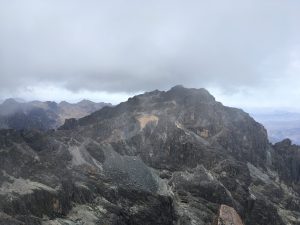 To the southwest, Cerro Rocarre (5070m according to peakbagger.com) looked clearly higher, as did another peak farther south and the tower east of the pass. Rocarre looked like a far-away slog, while the tower looked interesting and was on the way home. Jacob had had enough, so I left him on the summit, planning to meet near a small lake below. I slid and hopped down sand and talus on the northeast face, then contoured around to the notch left of the tower, where the most likely route seemed to start. I passed another oddly-placed wall, and may have seen a set of old footprints. 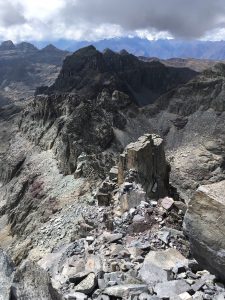 I peered over the notch, then retreated a bit to start up a slot right of the ridge before traversing back to the crest, where I found a cairn. Beyond, the route was sustained and often exposed, but probably not harder than fourth class. There was plenty of loose debris, but the underlying rock was generally decent. With a bit of experimentation, I found a path that started left of the ridge, then returned to the crest until reaching a light-colored vertical step. 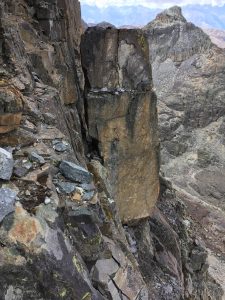 It seemed like I could make progress up a low fifth class crack, but I instead moved left, finding an awkward step and a squeeze chimney behind a detached column. I removed my pack, passed it through, then thrashed after it to climb some exposed black rock back to the ridge above the step. From there, wandering class 3-4 terrain generally left of the ridge got me to the summit boulders. I built another cairn, took pictures of a small lake to the east, Carhuacocha and a man-made lake to the south, and the first Flery Punta. According to my phone, this peak was between 5114 and 5116 meters high, making it the second-highest summit in the Cordillera Negra. However, Cerro Rocarre and the peak to the south still looked higher. 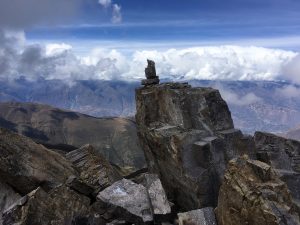 I only made a couple of small wrong turns on the descent, and soon met Jacob back at the lake. It seemed clear that our route on the way out had been the least bad, so we retraced our steps to camp. I had hoped that Flery Punta would be a two-day trip, leaving me a day for Coñocranra, but hiking out that day would have involved headlamp and misery. I reconciled myself to another frosty night, and another item on my to-do list should I return to Peru.

Neither of us even thought of calling the taxi driver, so after breakfast, we packed our still-frosty stuff and struck out for Huaylas. We followed the old trail back the way we had come, then shortcut the switchbacks of an abandoned road mysteriously winding up above 4300 meters. Eventually leaving the road, we found faint cow-paths feeding into the more developed ones leading to Huaylas’ uphill suburbs. After something like lunch, I sat in the collectivo to watch the town saint’s statue get paraded around the square to a marching brass arrangement of “Ave Maria,” then rode back to Caraz and Huaraz.

Sunset on Huascaran and south

Second Flery from below