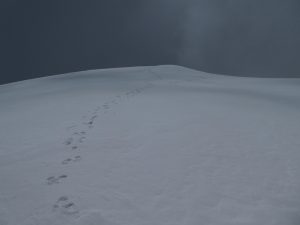 After twice carrying lots of gear and camping out, only to be shut down by weather without summiting any peaks, I was done fighting the weather, which continued to be uncharacteristically wet for July in the Cordillera Blanca. Unlike in the North American ranges with which I am familiar, precipitation in the Cordillera comes from the east, so I looked at a map for peaks on the western edge of the range that could be done in a day from Huaraz. Cashan seemed like an option until I saw a photo of someone climbing its summit snow ridge a cheval (yikes!), and Shaqsa looked a bit too far away. Rurec is less a peak than an unimpressive snow dome on Huantsan’s south ridge, but it looked close and non-technical enough to be done in a day using fast-and-light gear. Doing so required a costly early-morning taxi to Janco (or neighboring Jancu), but I went ahead and paid for what was probably my last chance at a peak in the Cordillera Blanca.

The taxi driver was precisely on time at 4:30, and mostly quiet on the drive up to Janco. When I told him I was headed for Quebrada Rajucolta, he even backtracked a hundred yards and pointed me in the right direction. I started off up a dirt side-road, then continued along the line I had drawn on my map, which I thought followed a trail. Fortunately the terrain was all easy grassland, because the supposed trail either never existed, or was too faint to follow by headlamp. I climbed to a broad saddle as quickly as I could, stopping every few hundred yards to reorient via my phone. 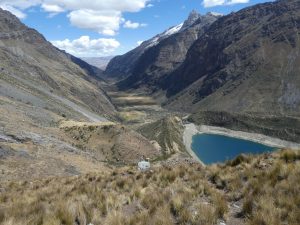 It was finally light enough to turn off my headlamp near some stone huts, just in time to soak my feet, already damp from the frosty grass, in a disguised bog. I wrung as much water as I could out of my socks and insoles, and resigned myself to a day of cold and sore feet. A stock trail finally appeared on the other side of the saddle, and I was able to jog most of the way down to the Rajucolta road. The road was good enough for one of Peru’s skilled taxi drivers in a beat-up Toyota, but I shudder at what it might have cost to get there so early. 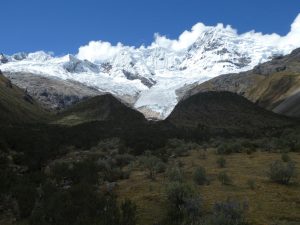 I once again climbed around the park gate, checked out the regional park sign, then made a decent effort at jogging up the nearly-flat valley bottom toward the hut and lake at its head. I had plenty of time to admire Huantsan’s 6000-foot glaciated west face as I made my way through the cows on the flat valley bottom. From the lake a bit above 14,000′, I had another 4600′ to climb on an unknown kind of trail, which turned out to be a maze of cow-paths with an occasional cairn. 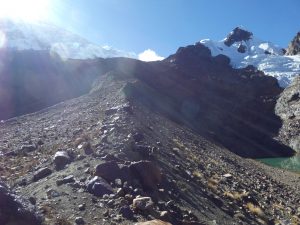 The cows had given up below the first lake, so the trail disappeared, and I lost the cairns, but I had a map, and all the terrain was easy grass and rock. I finally saw the just below the lake, and stopped to eat and warm my feet as I watched some orange-vested workers inspecting the dam below. The best route was obvious above the lake — follow the old lateral moraine to the ridge northeast of the summit — so I had no trouble regaining the line of cairns. They disappeared above the moraine crest, but the ridge and neighboring glacial slabs were all easy class 2-3 scrambling. 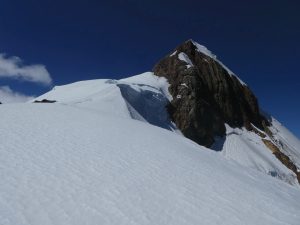 The line I had sketched on the map stayed right of the big glacier below Huantsan’s southwest face, following a rock and then glacier ridge to Rurec’s summit. I eventually reached the glacier near 5400m, and found it still solid enough for easy crampon walking, with a variable cornice on the right, and the occasional crevasse to keep me alert. I made my way toward a rocky arete that I thought was near the summit, watching the clouds advance and retreat from Huantsan’s east side. 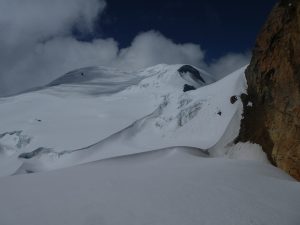 The rock turned out to be an independent chossy summit, best bypassed to the left with a bit of elevation loss. Rounding this obstacle, I saw that my planned ridge route was a bit more complicated than expected, and that clouds intermittently engulfed the summit. A path straight across the glacier would have been more direct, but it seemed to stay on the ridge, where the crevasses were fewer and more visible. This involved a couple of sketchy sections where the steep left side and corniced right side were both steep. At one point I had to traverse right around a rotting snow bridge, climb a short vertical snow step to regain the crest, then balance-beam along a knife-edge to easier ground. 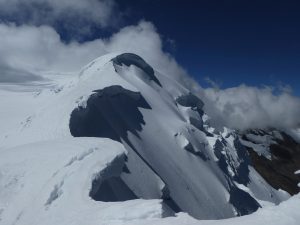 The summit itself was an anti-climax, being both round and covered in clouds. I found what seemed like the high point for a few seconds, then turned back, worried that the clouds would complicate my return. Surprisingly, though, they stayed east of the crest until hours later, so I had an easy time following my crampon tracks back along the ridge and down to the rocks. Stopping below the moraine for water, I wisely tasted the stream before filling my bladder, and found it every bit as disgustingly metallic as the Cayesh. I preferred to go thirsty. 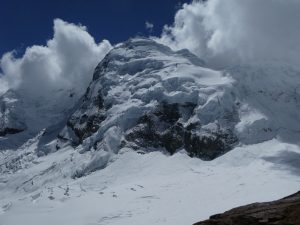 I had an easier time following the cairns on the way down, though the only footprints I saw were my own, and was soon back on the road. The valley is flat enough that jogging down was not much easier than up, but I easily passed a few hikers coming from a taxi waiting at the park gate. One of the cleaner streams from the side tasted mineral-free, so I was finally able to get enough water for a comfortable return.

Transportation options seemed iffy on the Janco road, and I did not want to run all the way back to Huaraz, so I added another three miles going in and out of the Shallup and Quillcayhuanca drainages to reach the terrible and familiar Pitec collectivo. I had worried about missing the last ride down, but my efforts at speed were wasted, as I spent about an hour waiting in the parked van before it finally took off. At least I was sheltered from the downpour, and got in some Spanish practice talking to the young fee collector, who was friendly but spoke no English. Fortunately I had leftovers in the fridge, because I did not reach the hostel until almost 6:00, with just enough energy to shovel food in my mouth, wash most of the dirt off, and stare half-dazed at my computer for a bit before going to sleep.