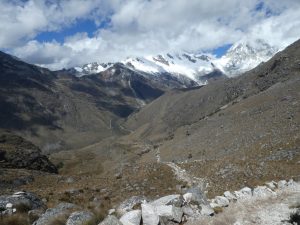 Chopicalqui is the easiest of the 6000m peaks around the Llanganuco Valley, and would be my first peak over 20,000′. As with many high Peruvian peaks, the standard route’s difficulty can vary greatly from year to year due to the ever-changing glaciers. I knew that Chopicalqui was being guided, however, so the route could not be too hard this season. 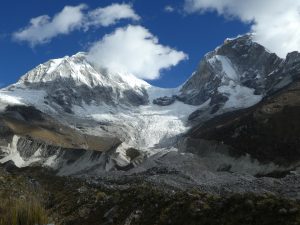 I packed up below the Pisco hut, then hiked back down to the road at the Laguna 69 trailhead, hoping I could catch a cheap ride to the Chopicalqui trailhead a short distance up the pass. There was a decent tourist crowd at the trailhead, along with some buses and taxis, but the one taxi driver who asked me where I was headed wanted 25 Soles to drive all of 5 kilometers up the road. I was incredulous — five would have been a reasonable price, and I might have paid ten, but it seemed like less work to just walk than to try bargaining him down to something reasonable.

With a couple of shortcut trails, it was about forty minutes and far less than five kilometers to the other trailhead. There was a minibus parked at the side of the road, and I could see a small city of orange tents up at moraine camp, giving me hope that the climb would be a simple matter of following a bootpack. I had intended to start from base camp as usual, but Chopicalqui’s base camp is particularly low and far away, and turned out to be a swampy meadow populated by a mixture of arrieros, burros, and cows. I did not relish camping there, and had plenty of daylight left, so I continued on the trail up the old lateral moraines toward high camp, planning to stop at the next flat spot with a decent water source. 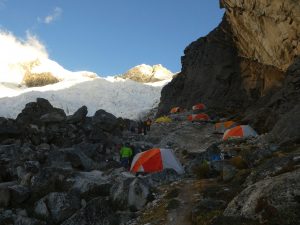 Unfortunately, despite there being large glaciers above me, I found no suitable spots as I neared the climb to the high camp, where I had read that there was no easy water. I dropped my pack, grabbed my bladder, and wasted about twenty minutes scrambling over moraines to reach a decent water source in the valley above base camp. Returning from that mission, I was surprised by another solo climber, a Peruvian trekking guide hoping to climb the peak on his three days off. He had old but good equipment — far better than what I had seen guiding companies renting out — and was a strong hiker, so we talked in clumsy Spanish for awhile before I took off to set up camp before dark. It was crowded, but I managed to find a bivy-sized flat spot after a few minutes’ search.

Chopicalqui’s moraine camp is a spectacular place to hang out, with the sun rising on the Huandoys and setting on Chopicalqui’s glaciated west face. After baking in the sun all afternoon, the face lets loose regular serac-falls into the early evening. I watched the glacier slowly disintegrate as I set up my bivy and ate my ramen, then set my alarm for 5:30 and tried to sleep. 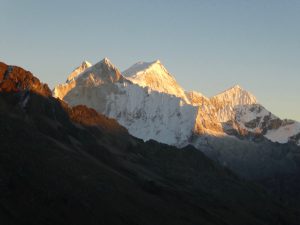 I had chosen my place at the far end of the campsite to avoid the expected mass departure of the guided groups at their usual senselessly-early time. Lying half awake around 4:00 AM, I was surprised to see neither commotion among the tents nor headlamps on the glacier. Curious… Figuring that I would take between four and five hours on the climb, I waited until the unreasonably late hour of 6:30 to finally start out by myself. 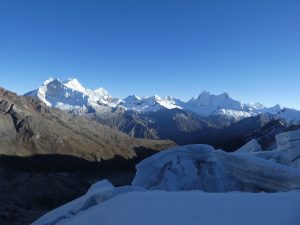 I climbed up some unpleasant and steep moraine, then side-hilled to the right side of the glacier, where a short pitch of steep, gritty ice got me to the gentler surface. I followed a track from the day before to a lone tent at a flat spot on the glacier, then followed fresh tracks to an old tent platform, passing the people who had made them along the way, clearly descending after having failed to summit. Their tracks continued toward some complicated-looking crevasses, so I took a more obvious line to the left, gaining a ridge toward the center of the glacier, then joining another old track. Just below the ridge, I again left the main track to the left, climbing a short steeper section to reach another safe hump leading to the ridge. 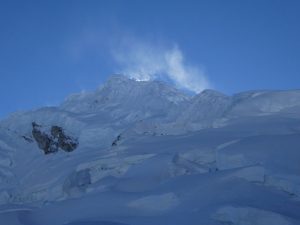 It was windy, but not too unpleasant so late in the morning. However, the snow on the ridge was crusty sugar ankle to occasionally knee-deep. These already annoying conditions were worse above 18,000′, so it was depressingly slow slogging up the ridge, flailing back and forth looking for the old boot track, or at least more solid spots. I eventually found the old track, where my pace improved, but I was again delayed re-routing around a couple of snow bridges that looked less than trustworthy. 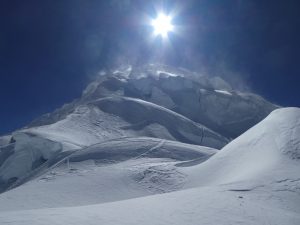 I finally reached a sheltered spot around 6000m at the base of the ridge’s crux, and considered my options. With the difficult snow conditions, it had taken me an hour to climb a mere 200 vertical meters; I would take another two hours to summit at that rate, and it was already 10:00. I had plenty of food in camp, so I turned around with very little reluctance, easily plunging down my track toward moraine camp. Along the way, I finally figured out what the guided groups were doing: after a late start, they were climbing a few hundred meters to a glacier camp for their summit bids. This was probably not the best time of day for them to be crossing snow bridges wearing heavy packs, but it gave me extra confidence in the boot-pack. Some asked about the snow conditions up high, and I told them what I had found, hoping they would take it upon themselves to make me a trail in the morning. 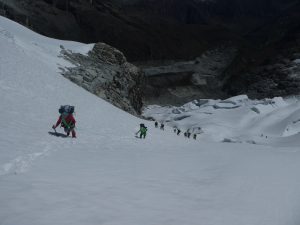 One busybody guide scolded me in passing, first in Spanish then in English, about “free soloing” glaciated peaks. I made a half-hearted attempt to explain that I knew what I was doing, then gave up and moved on. I wondered how many of the clients had practiced catching a crevasse fall or setting up an anchor and pulley system, and how many of the groups of two were just suicide pacts with extra weight, ultimately concluding that, as in religion and American politics, argument was pointless.

I made it back to camp around lunch, finding an easy source of silty glacier melt a short distance off-trail, then sat around for the afternoon reading about Gertrude Bell and watching the next wave of clients make their slow way up the moraine. I vowed to make a more reasonable attempt this time, planning to start around 5:00 and expecting to summit between 9:00 and 10:00. 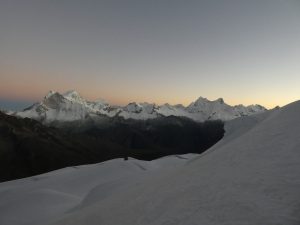 Waking to my 4:30 alarm, I was baffled to see two headlamps on the ridge already above 6000m. Summiting in the dark makes little sense, and even less on a southwest-facing route that does not even see sun until around 10:00 AM. Grateful for their efforts at packing in the route, I hiked the moraine and was a short distance up the glacier by the end of headlamp time. The small lower and larger upper glacier camps were of course empty as I passed, and I could see some figures making their way slowly up and down the ridge above. 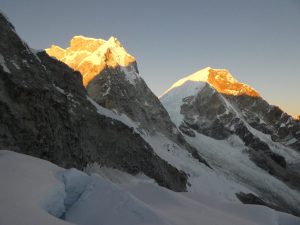 I passed the 4:30 headlamp group just at the ridge, and asked about their attempt. Sadly, their ridiculously early start had led to them being turned around by the cold shortly below the summit. Cold can be just as difficult and dangerous as softening snow, and navigating a crevassed ridge by headlamp is slow and error-prone. I was somewhat regretting my own “early” start, wiggling my toes in my boots as I continued up the shadowed ridge. 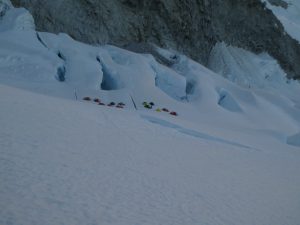 I began passing descending guided groups near where I had stopped the day before. The route above was not difficult now, but the knee-deep trench on some steep sections testified to heroic trail-breaking work by the earlier parties. I finally reached the sun at a plateau just below the summit, and stopped out of the wind to eat a bit and warm my feet. The final route to the summit headed to the right around the summit mushroom, then up its somewhat steep side. I put on all my clothes and waited in a sunny and sheltered spot, talking to a climber from Tenerife while a group of “too many” on a rope slowly downclimbed this final slope. 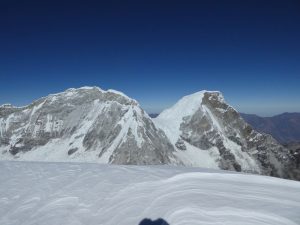 When the route finally cleared, I stepped into the wind and dashed for the summit, reaching it in 3h45 from camp, about as expected. The views were spectacular, but it was bitterly cold in the wind, so I spent only about a minute on top before scurrying back down to shelter. I worked my way through the groups on my way down, passing them to one side or waiting as they belayed from a picket above a crevasse where there was only one safe path. One of the guides congratulated me on my climb, and I thanked him for his effort plowing the route. 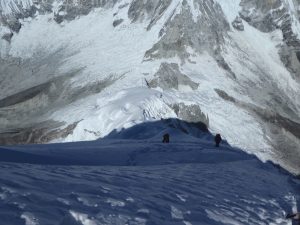 I stopped to talk to the trekking guide at glacier camp, and again to the early headlamp team, who turned out to be from New Mexico and Colorado. I talked to one of the camp cooks a bit, then had lunch and packed up camp as the others trickled in. I talked some more with the American team as their cook and porters took care of them. It looked comfortable, and was probably not expensive, but I would feel uncomfortable having “mountain servants.” I did not hesitate, though, when the cook offered me a bowl of soup, then chicken and rice. 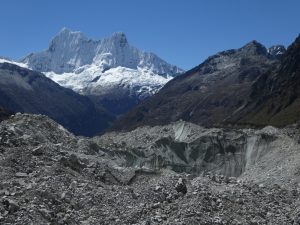 On my way down, I passed more porters carrying burlap sacks and other people’s technical gear to the non-burro-accessible camp, and a slightly larger number of climbers. I also saw my second woman in two and a half days on the mountain, out of fifty or more people total. While this ratio was more extreme than usual, it highlighted the fact that mountaineering is an overwhelmingly (white) male sport, with “the help” in this case being poor brown people. 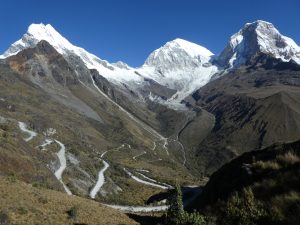 I talked briefly to the trekking guide again at the road, waiting for a collectivo to take him back to town and to work the next day, then started hiking up the switchbacked road toward the insane Llanganuco Pass. I might have paid 25 Soles for a ride if offered, but there were no cars headed uphill in the afternoon. I grimly counted out the well-marked kilometers, occasionally trying to shortcut a switchback to save time. I finally reached a Huascaran Park sign at the highest switchback, and found a well-established and apparently recent stock trail contouring around the hillside toward Yanapaccha. I had been up and hiking for most of twelve hours and climbed over 6500 vertical feet by the time I finally reached my next base camp, glad that the next day’s short climb would be the last on this miniature “expedition.”

Icefield to the SE

The next wave arrives