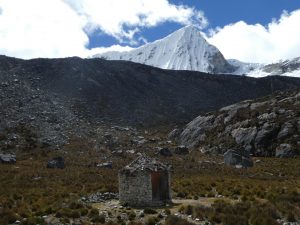 Pisco Oeste is another Peruvian warmup peak, made even friendlier by having a European-style hut at 4650m, just 1100m from its summit. It would be a strange choice of peaks after Tocllaraju, being both lower and less technical, were it not for two redeeming features: close-up views of the dramatic and too-hard-for-me Huandoys; and sharing a valley approach with Chopicalqui, a moderate 20,000′ peak on my to-do list. Since most peaks in the Cordillera require a day of collectivo-riding and approach hiking beforehand, and often an in-town recovery day afterward, I try to amortize this “wasted time” over several summits.

Getting to Pisco was pleasantly cheap, despite paying tourist rates for the last leg. I took a bus to Yungay, then got out at the paradero (bus terminal) to figure out how to reach cebollapampa, the trailhead for both Pisco and the popular Laguna 69 hike. I sat on an immobile collectivo for a bit, then met a young American couple who were trying to get to the Santa Cruz trek and had been waiting much longer. They offered to split a taxi, but were reluctant to pay what he asked. Not wanting to deal with that situation, I jumped at the chance to squeezed into another bus along with a dozen locals and some burlap bags of produce, all bound for somewhere on the other side of the Llanganuco Pass. They tolerated and took good care of my overstuffed pack, one asking about my water bladder hose, then carefully tucking away the drinking valve. 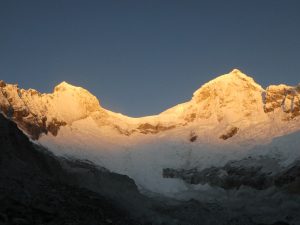 The road to the Llanganuco Lakes starts out decent, then turns to gradually deteriorating dirt as it climbs through farms and smaller communities. The valley’s entrance is an improbably deep and sharp notch, with granite cliffs rising a thousand feet or more from both sides. The north side in particular would be a rock climbing destination were it not for some evil plant that somehow manages to grow on the near-vertical surface, fed by runoff from the glaciers above. 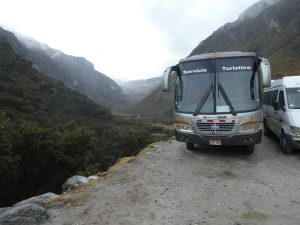 The lakes, fed by the surrounding glaciated peaks, are the expected brilliant blue, and seem to be a popular local tourist destination. However, the intermittent rain on the day I approached limited the crowds to only a bus or two and a few dismal picnickers. The bus stopped at the Laguna 69 “trailhead,” a wide spot in the road where some buses and taxis were parked, and I paused to have a snack and debate whether or not to put on my “rain gear,” i.e. “lawn-sized garbage bag.” I eventually started without, then had to stop about ten minutes later when it began drizzling. I huddled under the eaves an abandoned outhouse and, while curious cows investigated, cut a face-hole and figured out how to fit the thing over both myself and my pack. As always, it worked admirably, keeping both my gear and my upper body dry for less than a dollar. 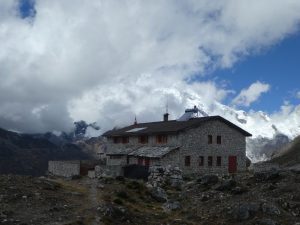 With camping and mountaineering gear, plus five days of food, the wet 2000-foot climb to the campground below the hut felt endless. Reaching the dismal field, I hopped across the wet parts, stashed my pack under the garbage bag on a dung-free piece of ground, and headed into the hut to be warm and dry for a few hours. I was expecting something primitive, but instead found a hut worthy of the Alps, and a small crowd of mountaineers watching “Ocean’s 11” on a projector. I paid Alpine prices for some hot chocolate (10 Soles!), watched the last half-hour of the movie, then sat to read as the others talked amongst themselves in various languages. The hut even had a nylon-string guitar, which I tried playing for a few minutes before heading back outside near dark to set up camp and “enjoy” my ramen and canned tuna. 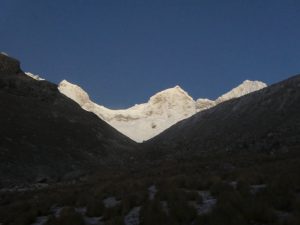 It started snowing soon after dinner, and continued on and off through the night. My gear stayed mostly dry under the garbage bag while I miserably managed the condensation in my zipped-up bivy. I stupidly failed to keep my water bladder inside with me, so while there was enough liquid water for breakfast, it would be awhile before I could use the drinking hose. Given the conditions and the easy climb, I felt no need to hurry in the morning, huddling in my bag for awhile before beginning the cold weather morning dash: (1) loosen mummy bag and put on hat; (2) unzip further, extract upper body, and put on all layers stuffed in my stuff-sack “pillow”; (3) start stove to boil water (complicated by the cold and snow); (4) shove gloves and pants into sleeping bag to warm up; (5) add oatmeal and drink resulting glop while using pot to keep hands warm; (6) get out of sleeping bag, put on warm pants and cold boots, and tie laces bare-handed before hands freeze; (7) put on warm gloves and pack, and start moving before warm oatmeal wears off. 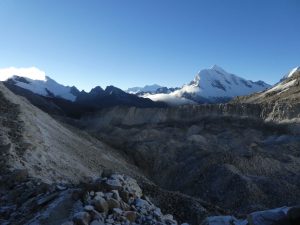 I started out along the obvious trail up the moraine, then quickly realized that Pisco’s approach requires a truly miserable amount of loose boulder-hopping across the former path of the shrunken Huandoy glacier. I descended the helpful chain down the lateral moraine, then followed cairns and faint bits of path toward the saddle west of the peak. Losing the path at some point below Laguna Matacocha, I did some desperate moraine-scrabbling to gain the other lateral moraine, which was probably the day’s technical crux. Once on the trail again, I made better progress, catching and passing a German family near the glacier’s toe. I talked to them a bit as we geared up, learning that the parents had visited the region twenty years earlier, then left them to follow the helpful boot-pack toward the ridge. 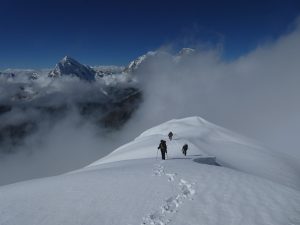 Other than a couple of steeper steps requiring a bit of front-pointing, the climb was mostly a matter of walking on snow and not stepping in obvious holes. The clouds were broken enough on the ascent to give dramatic views of the Huandoys behind me, and various unfamiliar peaks to the north and east. The dusting of snow at camp had been deeper up high, making me grateful for the group ahead breaking trail. I caught them 100 yards from the summit, passing to slog through the last bit of fresh powder. We had intermittent views of the much more dramatic Pisco Este and Chacraraju to one side and Huandoy to the other. It was warm enough to sit and talk long enough to learn that I had been following two Spaniards and a Frenchman, and to thank the latter for breaking trail.

The return to the saddle was an unpleasant walk through uniformly gray-white clouds and snow, squinting to find the crampon track where there was no fresh snow. I made a mental note to record a GPS track on future cloudy days. I met the German family about 1000 feet below the summit, still on their way up and seeming unconcerned by the conditions. (My instinct not to give unsolicited advice again proved correct, as it cleared later in the day.) I returned to the hut a bit before lunch, giving me time to grab more free water and learn some history before heading to the next trailhead. The Ishinca, Pisco, and Huascaran huts were all conceived by an Italian friar or priest, and are run by (often Italian) volunteers to benefit the local community. This explained the Italian Alpine Club flags in the dining room and the Alpine style, and made me feel that overpaying for hot chocolate at least went to a good cause.

Sea of clouds to the east

Peaks to the northeast

Headed to moraine camp and Huandoys?