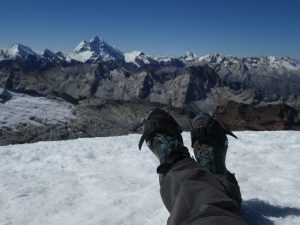 With the forecast calling for a few days of rain and snow, I was looking for a one-day ascent from the Huaraz. I had originally expected to take 2-3 days for Vallunaraju, a popular warmup peak near town, but after doing the math, I realized that I should be able to do it in a day from town if I could use my fast-and-light gear. Two fellow climbers at the hostel, Andi and Linus, assured me that front points and ice tools would be overkill, so I decided to give it a shot. 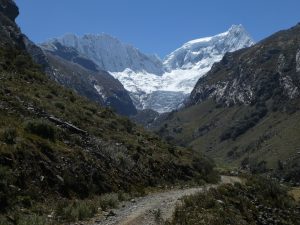 I woke a bit before my 3:20 alarm, and was out the door around 3:50, jogging and walking through the streets of Huaraz, my daypack slightly overloaded with an axe, running shoe crampons, and most of my remaining sugar-roasted peanuts. I knew the start of the route from a previous outing to Laguna Churup, including the locations of the most aggressive dogs. My headlamp seemed to dismay them, so they were less intimidating at night. Perhaps the cold slowed them, too; I was wearing my mitts and everything but my down jacket, which made me concerned about temperatures up high. 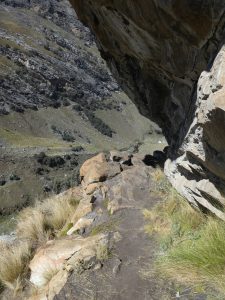 I found a gate a short distance beyond, easily bypassed via a pile of rocks to its left, then took another shortcut trail to eliminate a long, low-angle switchback. I followed the road from there, watching the sun rise on the other side of Ranrapalca. I eventually reached the direct approach to the standard moraine camp, marked by a brown-pained pole, and took off almost straight uphill on a well-defined use trail. The first part was a cow-path, but a squeeze through a cliff band kept the cows from wandering onto the upper slopes. 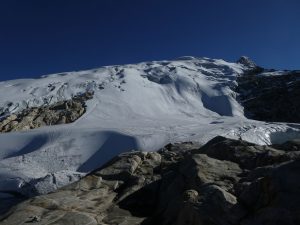 I saw one person when I passed the camp a bit after 8:00, but everyone else had unsurprisingly left for the summit hours before. It was comfortable climbing in the sun, but I was glad to have walked from town instead of shivering in my bivy near 5000m. The glacier’s retreat had left hundreds of feet of cliffy slabs to cross, but other had helpfully left me a dense line of cairns. Finally reaching the glacier, I found another, colder campsite and two people messing with a rope, and a well-traveled boot-pack reminiscent of the Alps. There would be no glacial route-finding today. 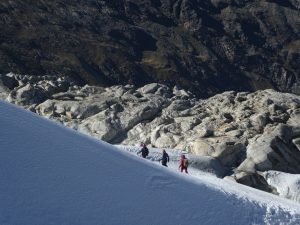 With crampons attached and axe tucked behind my pack, I started up the path, wiggling my toes to keep them warm in my frost-soaked shoes. The first party I met was, unsurprisingly, guided. They had probably started from the moraine camp at some unholy hour and summited around sunrise, and were now descending still wrapped in down. The guide gave me a bit of a dirty look in my running shoes, hoodie, and worn windbreaker, but said nothing as we crossed paths. 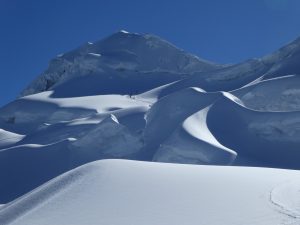 The glacier was impressively broken, but the path was already clear and never treacherous. Old ski- and crampon-tracks suggested that the surface had been powder or slush recently, but it remained solid for me; I could have slept in more. It was a long hike from the glacier’s toe to the steeper slopes near the summit, giving me plenty of time to enjoy the view across the western glacier to Huascaran. There were a couple of steeper pitches where I took out my axe for security, but I mostly kept it stashed behind my pack. My feet were cold but bearable, while the rest of me was comfortable with my hoodie and windbreaker half-zipped. With plastic bags outside my socks, I would have been completely comfortable. 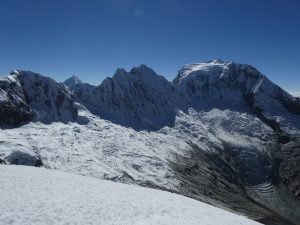 I saw a group of four skylined against the summit ridge, then again traversing the glacier below the final cornice. One commented that I was moving quickly, and I thought I might catch them on the descent (I did not). Popping out onto the summit ridge, I was once again struck by Ocshapalca’s terrifying summit ridge. The ridge was slightly exposed, but with well-worn steps in the snow, it was an easy walk to the summit. It was also surprisingly calm and warm, so I took my time sitting around admiring the views without needing to put on my puffy jacket. In addition to nearby Ranrapalca, I could see 6000m peaks from Huascaran in the north, to Huantsan standing alone to the south. I also noticed the clouds pooled on the east side of the range, presaging the next few days’ rain and snow. 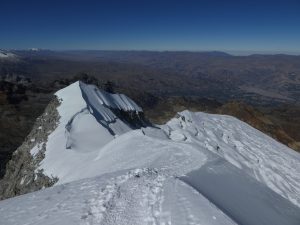 I could have stayed longer, as the temperatures were pleasant and the snow on the glacier remained hard, but I spent only about fifteen minutes before starting the descent. I was a bit cautious on a couple of the steeper sections, but mostly fast-walked or jogged in my crampons. I did not quite manage to catch the group of four, but did see one of its members starting down the rock as I reached the glacier’s toe. I grabbed a couple liters of clean water just below the glacier, shoved everything but my t-shirt into my pack, then followed the cairns back to camp.

The tents were a bit more lively, with one occupant asking how long I had taken to summit (just under 6 hours) and what I was training for. I passed a few more parties on my way down to the road, all of whom I pitied: one guy carrying a rope lots of gear; three people hiking up in double boots; and a couple hiking down carrying their boots and overnight gear. The man in this last couple asked me if I ran ultras (I did in ancient times), and if I had heard of the Ultra Tour de Cordillera Blanca (I had not). It turns out he may have been the one who put up the Strava track showing me the shortcuts that made this endeavor possible.

The rocky and nearly flat road was not fun to jog in a “heavy” pack, but I made a half-hearted attempt at speed. There was no ranger at the gate, making me think that I might be able to delay paying the Park fee, but unfortunately one was stationed where the shortcut meets the road. Anticipating such an encounter, I had packed a copy of my passport and enough money (150 Sols, ouch!) to buy a month pass.

The transaction was pleasant — it is normal to buy a pass when “caught”, and I am happy to support the park — and I was about to continue running when the ranger turned surprisingly talkative. He had all sorts of questions, from how to describe different types of hair in English (“straight,” “wavy,” “curly”), to what I did, to what sort of work there was in the States. I answered as best I could in a mixture of Spanish and English, and things weren’t too awkward. He was clearly used to dealing with tourists with poor Spanish skills, and so knew to speak slowly and simply, and to deploy bits of English when possible. I was in a mood for speed, but hid my impatience, only taking off running when, after a half-hour or so, he left his post to begin hiking back toward town. I initially felt fresh after the long rest, but the endless road descent soon wore on me. I forced myself to continue jogging until I had gone 25 miles (and a bit over 9000 feet of elevation gain), then walked through the streets of Huaraz staring at my phone until I recognized landmarks near the hostel. Vallunaraju is one of the Cordillera’s easier peaks, so while I was encouraged to have done it in a day using running shoes, I do not anticipate using the same approach for the bigger and tougher objectives to come.

Far-off peak to the east

Clouds to the east

Looking back at descending party