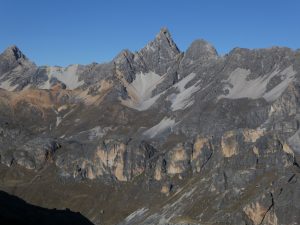 Cerro la Saga from the east

I had been staring at the sharp highpoint of a ridge west of Rumiwayin and Yarupá for a couple of nights, and decided to try climbing it. (I now know that, on the Alpenvereinskarte map series, it is labeled 5201m, and appears to be the highest point on a ridge called “Cerros la Saga.”) Based on the views from the valley and Rumiwayin, it looked like the south ridge would be the most likely route, and that I could reach it from a valley heading west from the head of Laguna Surasaca. 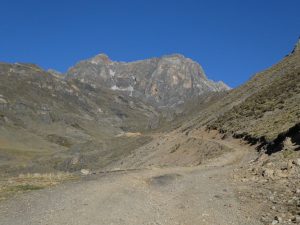 Old road up to abandoned mine

I hiked the road back around the west side of the lake, then started up the valley behind a few houses and barns that had been unoccupied when I passed through a few days before. They now housed a number of people, dogs, and livestock, none of them seeming particularly friendly. I don’t know the private property situation in this part of Peru, but I got a distinct Deliverance feel from the place. Camping nearby seemed like a bad idea, so I backed off and continued down the road. Partway back around the lake, I remembered seeing a side-road going up the next drainage to the south, and decided to approach that way instead. I followed the side-road a bit, then wandered off to find a flat spot without cow pies large enough to sleep, a search that took depressingly long. 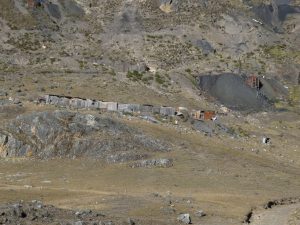 I was finally camped on the “right” side of the valley, so waking up was relatively pleasant and sunny. I stashed most of my gear, then took off happily in trail runners, hiking a road that looked drivable but seldom-used. Just before the road’s end at an apparently abandoned mine, I took off on a cattle trail up the valley. The trail was well-used not only by cows, but by humans, and appears to be a popular pass between the abandoned mine and the Peruvian rednecks’ unofficial back yard. 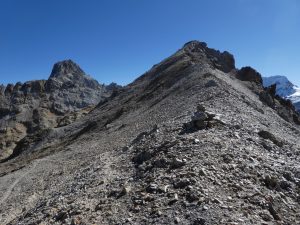 Start of ridge at upper pass

I saw several potential ways to reach Cerro la Saga’s south ridge, and semi-arbitrarily chose to traverse the ridge connecting it to a lower peak to its south. This started out well, with a bit of a trail leading to the saddle, then slowly grew less pleasant. Where the trail continued down the other side of the saddle, I left it to follow the ridge crest north. As is typical of the region, the rock was rotten, but at least the ridge crest started out fairly smooth. Unfortunately, I began running into choss-towers and gaps as I approached my goal, and they got steeper and looser as I got closer. I traversed some desperately loose scree to the right of the first big one, then either skirted subsequent ones to the left, or did some slightly sketchy downclimbing into the gaps. 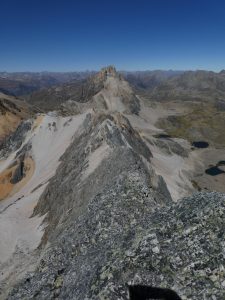 Looking back at the nastiness

What I had expected to be an easy half-day excursion was turning into a nerve-fraying ordeal. I gave up on the ridge at one of the final towers, dropping down grass and choss on the right, and almost gave up on the whole thing. I had already spent quite a bit of the day, though, so when I found some ascending grassy benches and class 2 terrain leading back toward the peak, I soldiered on. I had to at least give it a decent try.

Once I thought I was past the worst of the towers, I started trying to get back to the ridge crest. I went too far on my first attempt, and was blocked by a short but unpleasantly vertical wall. I retreated a bit and, after a couple of false starts, found a class 3-4 chimney leading back to the ridge, which I cairned for my return. The ridge had a couple of class 4-5 steps, the second of which I avoided by an ill-advised choss traverse on the left side. 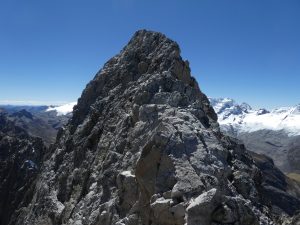 I finally reached the ramp/gully right of the south side of the summit that looked from afar like the key to the summit. I clambered up it, then exited left on some class 4-5 terrain that looked like it would lead back to the ridge. With a bit more route-finding, I regained the south ridge a couple hundred exposed yards from the first of the twin summits. From there, I reached the top with a bit more careful fourth class climbing. I had (of course) seen no fixed gear along the way, and there was no human sign on either summit. I visited both summits, then built a substantial cairn on the first, wondering if this was a first ascent. 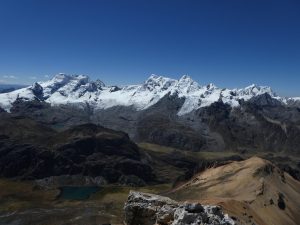 I made two improvements to the route on my return: First, I stayed on the ridge where I had detoured left on the way up, finding more exposure and slightly harder climbing, but much better rock. Second, I headed straight down the east side of the ridge from the grassy benches instead of suffering through the long traverse in reverse. This involved some slippery grass and unpleasant talus, but seemed like it would be faster in both directions. I soon picked up the trail on the north side of the pass, and followed it over to the mine side, where I filtered a couple of liters of water above the highest visible cow, then hiked and jogged back to my camp.

The dreaded sheep were out by then, but fortunately the shepherds were close enough to their sheep-dogs to call them back before they menaced me, and seemed much more friendly than the one I had encountered a few days before. There were llamas and yet more sheep between me and my stashed gear, but it had remained untouched, and none bothered me as I packed up and started out on the long road-walk around to Mina Raura. The climb had taken much longer than I had anticipated, making headlamp time likely, but it had been worth the effort. Even if it was a non-first-ascent on an unnamed minor peak, I had enjoyed the adventure and problem-solving on unfamiliar and untouched terrain.

Old road up to abandoned mine

Limestone cliffs above mine

Start of ridge at upper pass

Looking back at the nastiness

North to the Huayhuash

Back toward lower pass

Cerro la Saga from the east