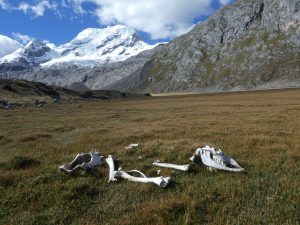 Having learned how the snow behaved (well), and how I behaved at altitude (slowly), it was time to spice things up a bit. Nevado Rumiwayin (or maybe Culcushjanca) is an 18,300′ peak between Nevado Matador and the slightly higher Yarupá peaks which form the southern end of the ridge between the Laguna Surasaca and Mina Raura valleys. The standard route follows its corniced and occasionally crevassed north ridge, climbing hard snow with a couple of steps exceeding 45 degrees.. 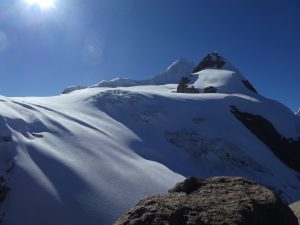 I got another fairly late start, choosing to avoid the broken tongue of the glacier between Rumiwayin and Matador by climbing some wretched choss to its left. I eventually topped out on a false summit, which I descended to join the glacier above the worst of its crevasses and bare ice. I had studied the path to the base of the ridge the previous day, and had little trouble dodging the crevasses, finally climbing one steep-ish slope to reach the crest near the base. 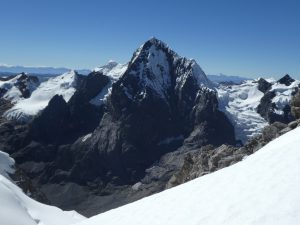 The first part of the ridge was mostly easy French-stepping, with one steeper section where I front-pointed and took out my second tool for security. Beyond, the ridge leveled off to a corniced section scoured by east winds, with impressive views of Torre de Cristal’s west face. The upper ridge looked intimidating up close, with a large and variable cornice overhanging a glacier to the right, and a steep mix of choss and Andean fluted snow dropping sharply to the left. 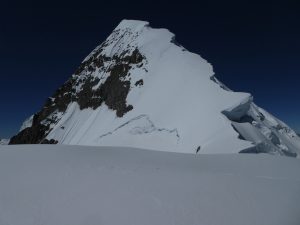 I scampered across the flat section well left of the cornice, anxious to get out of the wind, then took a minute to catch my breath before attacking the ridge. I was sometimes comfortable French-stepping, but mostly crawled diagonally, kicking in with my front points and daggering both tools. All the while, I kept a sharp eye on the snow in front of me, looking for the sometimes faint crack marking the edge of the sometimes enormous cornice. The safest path was almost always well away from the ridge crest, traversing the steep-ish snow above the east face. 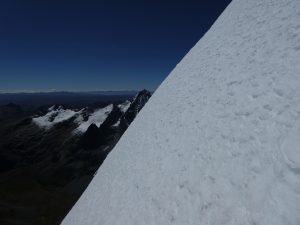 The main step, which looked to be over 45 degrees, was fairly strenuous at the altitude, as it was difficult to kick in a horizontal step to rest, and I even made a few legitimate tool swings on some of the harder sections. I worried briefly about downclimbing it, but the snow was solid despite having baked in the sun all morning, and both crampons and tools were solid. The ridge leveled off a bit above the step, and was then broken by a sort of crevasse, which was filled in to the left. Above, another steep-ish pitch led back toward the ridge, which eased off toward the summit. The cornice finally went away, and I was able to balance-beam along the crest, which was much less strenuous than traversing to one side. 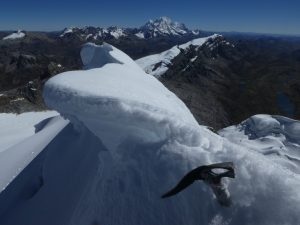 The summit itself, however, was a precarious-looking corniced mess, with light showing through in a couple of places. After deciding I did not want to mantle onto it, I traversed a powdery snow-plain below it to the right, then traversed back up its west side to a gap between the two highest parts of the cornice. I poked my head over, tapped the highpoint with one hand, and decided that was good enough. I normally consider “summiting” a peak to mean putting boots on the highest point, but decided to make an exception when doing so would likely make it no longer the highest. 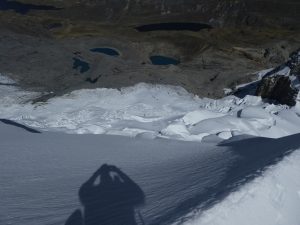 The descent was a mixture of French-stepping and inward-facing downclimbing, which I can do fairly quickly. It was close to noon by the time I reached the crux step, and the sun was finally having an effect on the snow. While it was still solid underneath, a thin layer of ice and slush was starting to fall off the surface, forcing me to kick harder than usual. The descent to the saddle with Nevado Matador was mostly an easy walk, with a brief detour to decide that I did not have the energy to climb Rumiwayin’s northwest subpeak. 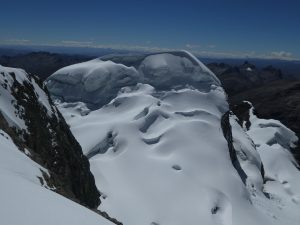 I chose to descend the glacier rather than reclimbing the chossy false summit, and found it much easier. I hopped a few open crevasses, carefully walked down some bare ice, then chose a reasonable place above the nose to dismount. After putting away my snow equipment, I made my miserable way down a bit of moraine, filled up on water from a high lake that looked unlikely to need treatment, then walked back to camp.

It was only mid-afternoon, so I decided to move camp closer both to Mina Raura, and to my next objective. I had been eyeing a striking rock peak to the west for the past couple of evenings. It looked to be over 17,000 feet, but had no snow or glaciers, and apparently no name. It looked like a fun break from snow-climbing, and hopefully a short side-trip on the way around to the mine, so I packed up, shouldered my miserable full pack, and made use of the remaining daylight to get closer to my next objective.

Yarupa peaks from near summit