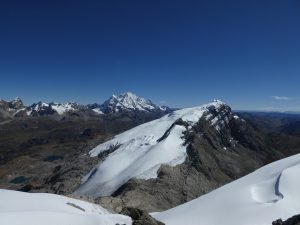 My acclimatization plan so far had been to spend a night at each of 8,000′, 34,000′ (pressurized), sea level, 11,000′, and something over 15,000′. I decided to continue that plan by summiting Nevados Matador Norte (or Sillaianka, 5247m) and Leon Huacanan (or Kuajadajanka, 5421m), two easy peaks on the northern end of the Cordillera Raura. In addition to adjusting to the altitude, this would give me a chance to look at the routes on neighboring harder peaks, assess snow conditions on various aspects throughout the day, and gawk at the nearby Cordillera Huayhuash. 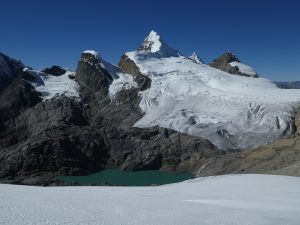 I cowered against the cold in my sleeping bag, watching the sun creep down the other side of the valley, but managed to get going a bit before 7:00, following faint cow-paths north along the west side of the Azuljanka (“cold blue place”), which used to be a continuous ice sheet. I had originally planned to start with Nevado Matador, but it was looking less nevado (snowy) than chossy these days, so I passed it up, gaining the ridge south of Matador Norte via a gully full of morainal debris. Starting a trend for the day, I wasted some time getting cliffed out on glacially-carved slabs. I eventually met the sun at the ridge, where I stopped to put on sunscreen and crampons, then headed up the glacier. 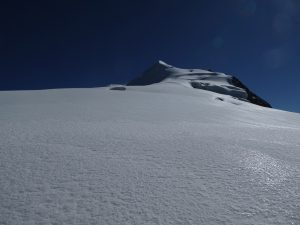 The snow was pleasantly firm as I crunched my way up the glacier, steering wide of anything that looked suspiciously like a crevasse. In general, staying near the broad ridge avoided most trouble. I was still getting used to things being “backwards,” with southern sun and winds from the east leaving most of the glaciers on south and west slopes. As I climbed, I turned back occasionally to check out my potential route up Rumiwayin, and admire the greenish lake left by its glacier’s recession. The slope got a bit steeper below the summit, but was still easy enough to mostly French-step with just one tool. 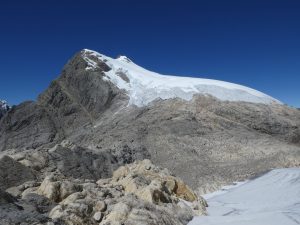 Much to my surprise, the summit was a small rock knob perfectly sheltered from the wind, so I took some time to “enjoy” my uninspiring food (Ritz crackers or cookies, I forget which) before continuing down the north ridge. After a bit of route-finding getting off the summit, it was an easy glacier-walk to the rocky saddle between Matador and Leon Huacanan. I took off my crampons, made my way through the maze of slabby bulges and choss (glaciated not so long ago), then found a semi-sheltered spot to crampon up again. 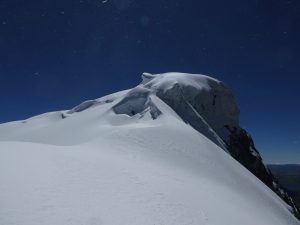 The second climb was a bit less straightforward. I started out hiking up the snow ridge, admiring the layers of the limestone uplift to the east, then dropped west to avoid the first of a couple of rocky subpeaks. Much of the rock in the Cordillera Raura is choss, so I chose to deal with the fairly tame glacier instead. The second subpeak on the ridge was smaller, so I chose to go straight over, and lucked out in not being cliffed out on its other side. The final summit ridge presented a few more problems in the form of crevasses and ice-cliffs crossing the ridge, avoided without too much trouble to the left. 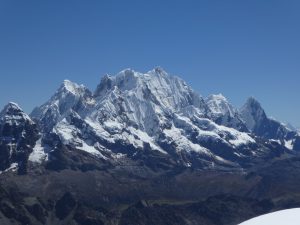 Leon Huacanan’s summit was much less pleasant than Matador’s, a broad, wind-swept snow-plain. Still, I stayed a few minutes to enjoy the close-up views of Yerupája and Siula Grande in the Huayhuash to the north before making my descent. The old guide I was using mentioned that the first ascent probably used the west glacier, so I tried that as a descent. The route-finding was a bit tricky at times, with big crevasses at odd angles, but the snow remained surprisingly firm even at mid-day. I had feared it would turn to Rainier-style slush by late morning, but remained nicely consolidated, meaning alpine starts would be less important in the future. 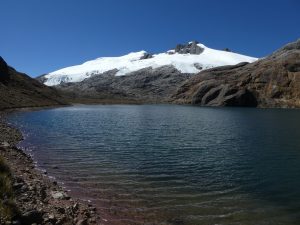 I thought my troubles would be over once I got off the glacier, but I was in for a frustrating afternoon. On my lousy map, it looked like I could simply follow some lakes up the gentle valley west of the peaks to a saddle, then descend to my camp. In reality, the retreating glacier had left a mess of cliffy slabs and loose debris between me and the valley. Once I dealt with that, the terrain continued to kick me in the nuts for most of the day, as I cliffed out, went the long way around lakes, and other frustrating things, all made worse by fatigue and altitude.

When I finally reached my stashed gear, found only thanks to my foresight in waypointing its location, I was happy to filter some water, eat tuna and oil smeared on Hawaiian rolls, and crawl into my bivy as soon as the sun went down between 5:00 and 6:00. Knowing where I stood with the altitude and snow, I planned to have a bit more fun the next day.

Distant high peak to the south

Sunset on the next one