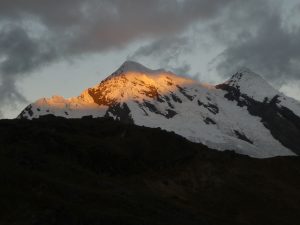 Although I complicated things a bit by starting and ending in Spain, last summer’s trip to the Alps was logistically simple: fly to Europe, rent a car, sleep in it at trailheads, and dayhike peaks. I knew that Peru would be more complicated, but did not expect the difficulties to start States-side. 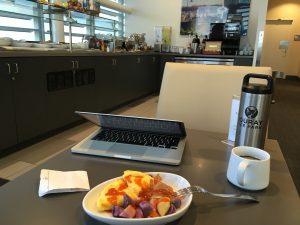 Only a few hours before it was scheduled to take off, my red-eye flight from Denver to Miami was canceled. After a last-minute scramble, I found myself on an even redder-eye flight to Orlando, with “efficient” seats that made it impossible to sleep. Arriving in Florida around dawn, I reclaimed my checked bag (TSA having apparently stolen my approved lock), then killed some time in a fine airport lounge. After a suitable delay, I took a local bus to the long-distance bus depot for my three-hour ride to Fort Lauderdale. Having caught up on the news while waiting, I realized that I had narrowly missed Donald Trump’s Orlando kick-off rally. A “Keep America Great Again” hat would have come in handy against the blazing Peruvian sun, but I was already far enough behind schedule. 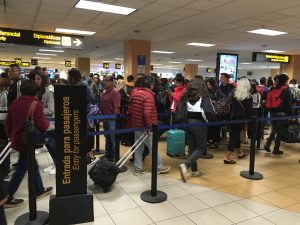 My evening flight from Fort Lauderdale to Lima was bad enough, made only slightly worse by a one-hour delay with no obvious cause. I could swear that we taxied in a circle before finally lining up for takeoff. By the time I finally deplaned and made my way though the hour-long customs line, it was well past midnight and I was only semi-conscious, having been awake for most of two days. Ah, the glamour of international travel. 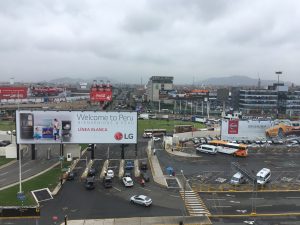 Welcome to my personal hell

Fortunately Ted had booked me a room at the airport hotel, which was much more pleasant than the airport floor I would have booked for myself. I slept better than I have in years nestled among six pillows, waking late to Lima’s gloomy haze and chaotic traffic, which instantly took its place with Mexico City among my “Places to be Escaped With Dispatch.” I stayed around long enough to enjoy the hotel amenities, including a breakfast of mini-hamburgers, then took a taxi to the bus terminal, where I eventually found a company with service to Oyón. The bus was late, but much more comfortable than flying coach. 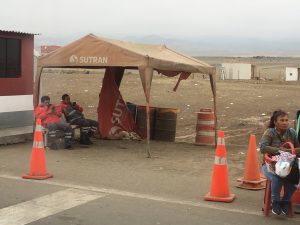 Checkpoint on the road to Gas Town

Once out of the city, the scenery turned into something out of Mad Max: Fury Road: a desert wasteland sprinkled with abandoned buildings and crossed by old tire tracks. It was dark by the time things got interesting, and I only caught headlight glimpses of a narrow road beneath overhanging dirt embankments. It was well past dark by the time I disembarked in Oyón, and cold above 11,000′; shivering, I waited for the spare tires and sacks of potatoes to be unloaded ahead of my duffel. I walked into the first hotel I saw, and happily paid more than I should have for a run-down but reasonably clean room. It had internet, beds, and a toilet — good enough. 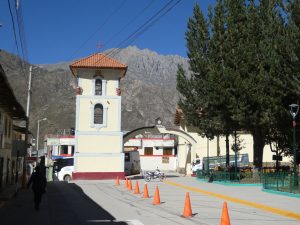 In the morning, I was still a long walk or unknown transit from my intended base camp near Laguna Surasaca. I used my pathetic Spanish to tell the hotel owner that I wanted to leave my gigantic green duffel with him for “about a week,” and he instantly agreed. Now it was time to do some shopping. Since I had no fuel canister, I needed thousands of cheap calories that did not require cooking. Fortunately these are easily acquired in Latin America, and for less than $20, I soon had a dozen muffins, a big bag of Hawaiian rolls, four cans of tuna, a couple pounds of sugar-coated peanuts, and various crackers and cookies. I attached the haul to the outside of my already-overloaded pack, and began walking up the road.

About a mile out of town, a car pulled over and the driver asked me ¿a donde va? I told him Laguna Surasaca, and he offered to take me to some unfamiliar village for 5 Sol. It was in the right direction, and only $1.50, so I awkwardly shuffled into the back with my pack, and off we went. The ride saved me a lot of annoying road-walking, and convinced me that figuring out local transit would be worth the hassle. 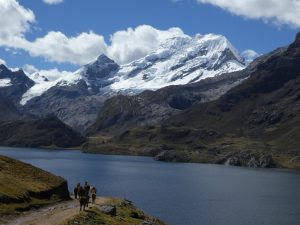 The main road from Oyón across the Andes via Mina Raura sees plenty of mine and other traffic, the side-road to Laguna Surasaca almost none. I had a quiet but endless-seeming walk to the lake, then around its 5-kilometer length, passing a road worker with a wheelbarrow and shovel, and a llama-herd checking in on his beasts. I left the road beyond the lake, following cow-, llama-, and sheep-tracks as the valley gently climbed above 15,000′. Along the way I passed a flock of sheep, and learned that they are to be feared and avoided. Though the sheep are docile and stupid, they are accompanied by vicious guard-dogs, not the cute guard-llamas I had hoped for. They didn’t seem inclined to bite, but three of them efficiently herded me up a hillside, barking angrily from a few feet away until the shepherd came over and called them off.

I continued uphill until dusk, then made my cold, miserable camp on a hillside in a small patch of grass free of cow turds where I hoped cold air would not collect. It was not the best choice, partly because I needed to camp on the west-facing side of the valley, and partly because everything is backwards: the Cordillera Raura is just far enough south of the equator for north slopes to get more sun, and prevailing winds seem to come from the east. But I was tired, and far enough up the valley to reach any possible peaks the next day. I watched the sun set on Rumiwayin and Yarupá as I settled in for a night of pseudo-sleep.

Welcome to my personal hell

Checkpoint on the road to Gas Town