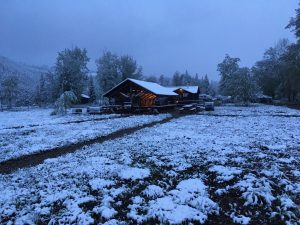 As I have every year since 2011, I have spent the first part of June at the American Alpine Club’s Grand Teton Climbers’ Ranch. After a week of staining cabins (and myself), fixing bikes, and other miscellaneous repair work, I normally stick around for a week or so to socialize and play in the mountains. I have done more of the former than the latter this year, partly due to inclement weather, and partly because of the rest of my summer schedule.

For the first time in nine years coming to the Ranch, I woke two days in a row to an inch or so of fresh snow in the valley. While it melted quickly below 9000 feet, the new snow stayed around awhile in the mountains. This has meant snowy rock routes, postholing in the high valleys, wet avalanches on south- and east-facing slopes, and powder on north-facing ones. Though this has not prevented me from regaining some of my winter-blighted fitness, it has thwarted some of the more ambitious goals I had for my brief Teton climbing season.

What about the rest of the summer? After a successful and rewarding summer in the Alps last year, I was looking to put together another extended dirtbag international trip. I am running out of new ranges to explore in car-accessible western North America, so I must travel farther afield to see completely new terrain. This summer, that terrain will be the Cordillera of Peru, where I will spend about 8 weeks climbing and trekking. The mountains are higher, wilder, and less suited to my abilities than the Alps, and the logistics will be more primitive and trying, but it should be an interesting experience nonetheless. Stay tuned — the adventure starts in about a week!

Owen and the Grand from Cascade Canyon

Sunrise on Grand, Owen, and Teewinot

Skinning up the Meadows


PS — As usual, I am making this trip with no corporate or institutional sponsorship. What support I have comes from friends: Ted, who is the master of frequent flyer points (and owns a house near an airport where I can stash my car); and Scott, who wears roughly my size and has generously donated boots, skis, and other miscellaneous gear. I have not and will not run ads, post affiliate links, publish “sponsored content,” or ask for donations on this site. If you support what I do and enjoy reading about it, please consider buying my new book.
This entry was posted in Meta. Bookmark the permalink.