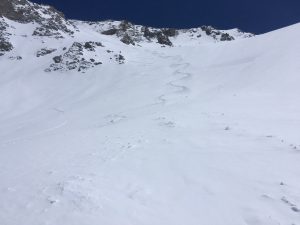 I had one final break between May snowstorms (!) to do some Sierra skiing, so I was thinking of going big and doing something crazy. However, I ran into Dan, and he convinced me to head back up to South Lake and explore another drainage, the Treasure Lakes valley between Mounts Johnson and Goode. I slept in comfortable temperatures near the Buttermilks, then drove up to frigid South Lake early in the morning. I took longer than I should have to prepare myself for the cold, finally starting skinning around 7:15. 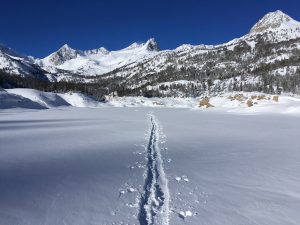 Someone getting an earlier start had bravely skinned across the lake and not fallen in, so I followed his tracks through about 6″ of fresh and surprisingly light powder. The track on the other side of the lake was less than ideal, bobbing and weaving around cliffs in the woods instead of following one of the inlet streams, but it eventually led into the open area above the lake. I left the beaten path where it seemed to head toward Thompson, arduously breaking trail up toward Treasure Lakes. The well-worn track from two days earlier had been completely obliterated by the fresh snow. 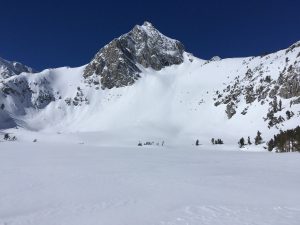 The terrain was mostly uphill, but there were enough flat sections that I knew the return would be slow. I saw potential lines facing all directions, but thanks to my late start, I dismissed the east-facing ones, which had already been baking for hours on a calm, sunny day. I eventually chose a northwest-facing slope on “Trapezoid Peak,” a minor summit on the ridge between Johnson and Goode that I had not yet climbed. Based on the map on my phone, it looked like I would get about 1300 vertical feet of skiing out of the line — not huge, but not bad either. 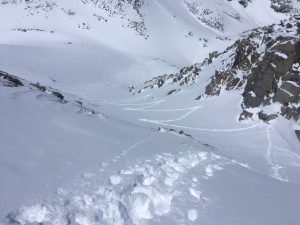 The slope started out fairly gentle, steepening to about 45 degrees toward the top. There was 8-12″ of fresh snow on the slope, already starting to become heavy from the sun and warming temperatures. The fresh snow had not bonded to an underlying hard layer in some places, and while it didn’t slide, it did make skinning a bit annoying. I switchbacked up the lower half, booted for a bit, then skinned the rest when the angle eased and the postholing got worse. 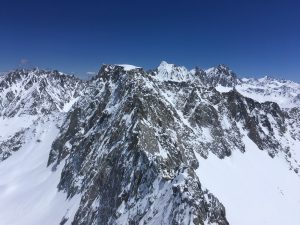 I eventually reached a saddle about 80′ below the summit, from which I could look down to where the Bishop Pass trail passes near Saddlerock Lake. The final climb to the summit looked painful, but I was so close… I put my skis on my pack, and booted thrashed, and dug my way toward the summit, kicking through to the old snow, and digging for rocks to get an occasional solid stance. I booted to within about 30 feet of the summit, then was forced to put my skis back on to avoid thigh-deep postholing. 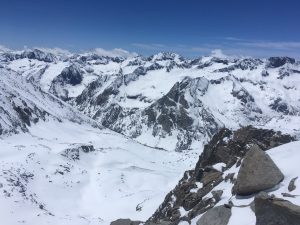 The summit rocks had been scoured dry, so I took off my skis, found a good seat, and ate a late lunch while admiring views of the Palisades, the Black Divide, and more distant peaks including Goddard and Humphreys. The wind eventually picked up intermittently, chilling me and coating me with spindrift. I waited for a break, then quickly transitioned to downhill mode.

I had noticed a narrow chute leading to the summit on the way up, and found its entrance after a bit of searching. A few careful turns later, I was on the main slope I had ascended, making fun, swooping turns toward the uppermost Treasure Lake. I got in a few more turns lower down, but there was a lot of poling and shuffling to get through the flat sections in increasingly-sticky snow. I was regularly whacking my skis with my pole to keep the bases clean, and on one whack, the bottom part of my pole flew off to one side of the ski track. I thought for a moment that the bottom section had come out, but quickly realized that the pole had broken. Ugh. I picked up the piece, then cautiously one-poled my way back down to the lake, and around through the South Lake Glacier to the parking lot, where I deposited the pole pieces in the dumpster. Perhaps it was a sign that ski season is over for me for the time being…

Fresh powder in the woods