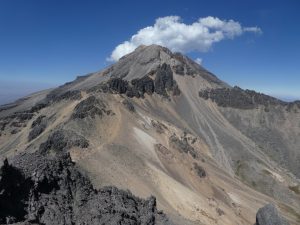 Iztaccíhuatl is Mexico’s third-highest volcano, and the second-highest that can be legally climbed, as Popocatépetl has long been closed for being too active. Translated from Nahuatl and Spanish, the title is literally “White woman (feet and bust),” and the mountain does indeed look like a woman lying on her back when viewed from the east or west. Her bust is the highpoint, her head and feet are legitimately separate peaks, and her belly and knees are minor bumps on the standard climb from below her feet to her chest.

I had hoped to climb Tlalocatépetl on my way over from Malinche, but confusion about the trailhead location and problems turning around on the divided highway spoiled that plan, so I kept on driving to Amecameca, then up the magnificent and windy road to Paso de Cortes, between Iztaccíhuatl and Popocatépetl. I paid the $3.50 entry fee at the visitor center, then crept along the dusty road to the La Joya trailhead, arriving late in the morning. I wasn’t feeling especially energetic, so I decided to take a short, slow hike up Los Pies, which would be new to me and, at 15,387′, would give me some acclimatization benefit. 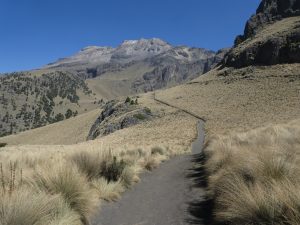 I ate some junk food, then took off slowly up the trail, passing various hikers headed in both directions, and a group of Red Cross members possibly patrolling the popular area. I left the main trail near a saddle where the trail crosses from the south/east to the north/west side of Izta’s crest, finding occasional old boot-prints and cairns on the slope leading to Los Pies’ summit knob. I was feeling slow, but was cheered up by a couple stretches of seemingly mandatory class 3-4 climbing getting through rock bands. This was the most technical climbing I had found on this trip, slightly more difficult than the crux on Pico de Agila, and it even required some route-finding. 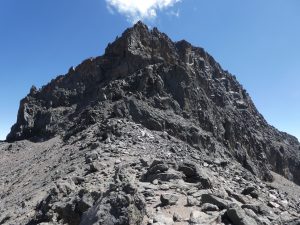 I eventually emerged on the ridge west of the summit knob, from which I could see the trail toward El Pecho below and to the north. The summit knob itself looked serious, defended by sheer cliff bands of questionable rock on all sides. However, tackling one problem at a time, it proved no harder than class 3. I started to the left, climbing near the crest, then crossed to the right, traversing a sandy slope below the main cliffs. Here I found a ramp trending back left, where moderate scrambling led back to the crest and to a couple old pitons and a dubious hand-line. After a brief wrong turn, I crossed back to the left near the hand line, traversed a bit, and was soon at the summit. 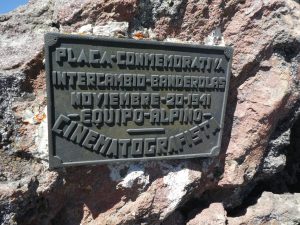 I found no register or cross, but there was a plaque cemented to the summit rock that made no more sense to me even after running it through Google Translate. There also seemed to be an easier way down a loose chute on the other side of the summit knob. I hung out for awhile, looking for people descending Izta to one side, watching Popo puff on the other and listening to its deep rumbling, then retraced my steps off the summit knob.

I thought it looked easier to drop north and join the standard trail on the main peak, but I was wrong. What looked like nice scree-skiing was a shallow and slippery layer with hard-pack underneath, with occasional patches of Izta’s evil mud. After numerous slips, I reached flatter ground and picked up the trail at the saddle northwest of Los Pies. With plenty of daylight left, I took my time on the trail down, passing (the same?) Red Cross group, this time playing around with ropes and gear next to the trail. 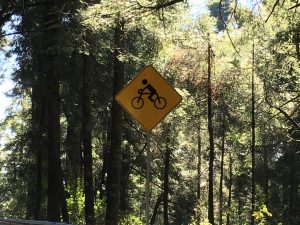 It was only mid-afternoon, and I was bored, so I made the long drive back to Amecameca for some street tacos, which cost about $1 each and contained generous helpings of chorizo and cecina. Many of the region’s eateries advertised their cecina, and I was eager to try it, having enjoyed it in Leon. However, this “cecina” was a different thing entirely, more like thinly-sliced, salty roast beef. It was good in its own way, but I preferred the Spanish version. After ingesting real food, I drove back up the pass to sleep near the trailhead and turn my meal into red blood cells.

For my last Mexican climb, I wanted to try to set an FKT for Izta’s standard route. The climb gains just over 4000 feet, and I thought I could go faster than Joe Gray’s 2h11 ascent despite the altitude and somewhat indirect route. I had my doubts when I woke up, sore from 5 days sleeping in a tiny rental car, with my cough and headache worse than they had been the whole trip. I sat in the car for awhile, drinking cold instant coffee and eating bland crackers, then finally drove over to the trailhead and got ready. I started my watch and jogged down the trail, and almost gave up when my left glute and hamstring complained. But suffering up hills is what I do; instinct took over, and I got to work.

Crossing the first saddle before Los Pies, I was surprised to run into the Mexican Army. There must have been at least 50 guys in combat gear, most carrying assault rifles, some carrying regimental banners, hiking steadily up the loose climb. The ones in back noticed me and shouted to their companions, who stood aside for me to run through along the short downhill-to-flat section. I reverted to hiking as soon as the trail turned uphill, and slowly plodded past the rest. I was impressed by their progress carrying all that gear; one guy even had a gallon water jug strapped to the top of his pack. 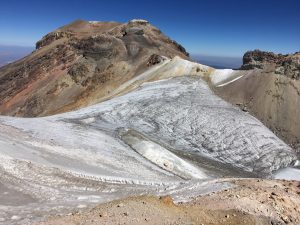 I saw no one at the hut, and only a few other people on the rest of the familiar route. I stuck to the rocks on the grind above the hut, and tried to run the flat and downhill sections along the undulating ridge. It was cold up high for a change, with a brutal west wind driving me to put on my hat and windbreaker, and to shelter my left eyeball. I sketched my way down onto the Ayoloco Glacier, passing two guys in crampons, then jogged by some people on the flat section before grinding out the final ridge climb to the summit. 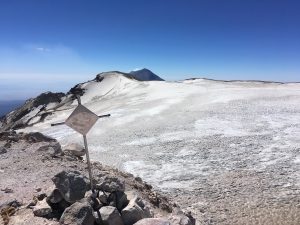 Izta’s highpoint may have been its summit icefield many years ago, but it is much diminished, and is now an icy depression surrounded by three similarly-high points. I reached the south one first, where most people stop, then cut straight across the ice plain to climb the north one via its east ridge. This one had a couple of crosses, but both had geological markers, and the south summit looked higher from the north. ¿Quien sabe? Pleased to have made the south summit in about 2h02, and the north one in 2h08, I decided I was done with speed for the day. 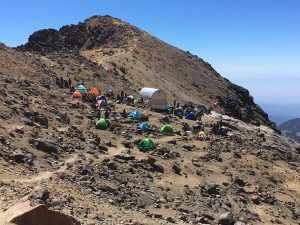 My plan had been to continue to La Cabeza, Izta’s northern distinct subpeak. However, I was sick of the cold wind, and it looked tricky from where I stood, so I moseyed on back the way I came. The Mexican Army had occupied the territory surrounding the hut, setting up brightly colored and very un-army-like tents. It seemed like they had plenty of time left to summit, but they were going to wait for la mañana. I made my way through camp, trying to be friendly and not get too close to any guns, then put on a bit of speed on the descent toward Los Pies. I stopped once to talk to a fellow American, then cruised back to the car.

I drove to the visitor center to rinse the volcanic dust off my feet and legs, then found a Starbucks to kill a few hours before driving to the airport. Using the Starbucks WiFi, I learned that I was far from the FKT, a blazingly fast 1h40 or so set (once again) by Santiago Carsolio. Oh, well… Luckily I left myself plenty of time to return the car, because it took me several circles and wrong turns to find the hole-in-the-wall car lot. I handed in the keys, got back my deposit, then began the 2-day transit nightmare home. It hadn’t been the Mexico trip I had planned, but non-tourist Mexico is still an awesome place.

I want to see a Mexican Pika

Cold bird on a cold morning

This entry was posted in Mexico, Speed Record, Tourism. Bookmark the permalink.