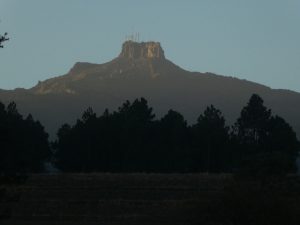 Cofre de Perote is a maybe-14er volcano near the town of Perote, north of Orizaba. It earns its name for its large square summit block, high and vertical on all sides, which likely made it Mexico’s most technical volcano before someone blasted concrete steps in the side and littered the top with antennas. It is a long drive east and around Mexico City from Toluca, so it was getting late by the time I realized that I should have gotten gas at one of the many Pemex stations along the toll route. It was even later by the time I tracked down a random station on a side road, so I went only a short way up the road toward El Conejo before finding another dirt side-road on which to camp. This one even had an old fire ring, making me feel more like I was respecting local customs. 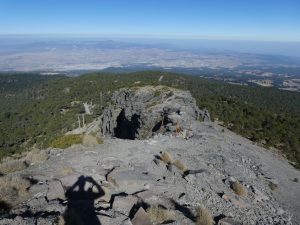 I continued uphill in the morning, driving through the increasingly rural towns of Los Pescados and El Conejo, then on up into the Perote park, a sort of poor man’s version of the Malinche one to its west. I became increasingly concerned for my poor little rental car as I bounced up the lousy cobbled road toward the antenna installation, so I parked at the first marked parking spots and walked the rest of the way to the unoccupied hut and sort-of trailhead. Instead of following the road, I found what looked like a built-up downhill mountain bike track, with drop-offs and banked turns. 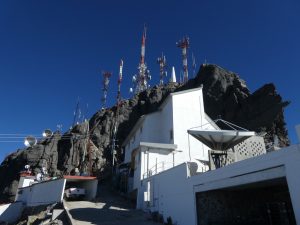 I returned to the road for a bit and then, following a track I downloaded from Peakbagger, took a faint trail that climbs the ridge directly toward the towered summit. Though it looked like a mere use trail, it was at one point official enough to merit concrete steps and handrails on one narrow section. This trail rejoined the road just below the ugly, decaying infrastructure littering the summit area. I passed some dilapidated concrete buildings, climbed the stairs, and awkwardly greeted a trio of antenna workers as I tagged the summit. The peak has another, almost equally high south summit, also accessible by road, and I got about halfway there before deciding I did not care. I returned to the trail, retraced my steps to the car, and drove back through the towns, having to stop a couple of times to allow herds of sheep to flow around the car. 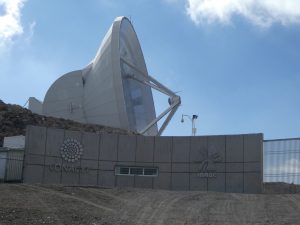 As expected, the outing took a short half-day, leaving me time to drive south through Ciudad Serdan, then around east and up the familiar road through Atzitzintla and Texmalaquila to the saddle between Orizaba and Sierra Negra. My rental car made easier work of this dirt-and-cobble road, and I reached the 13,200-foot saddle between the two peaks by mid-afternoon. From there, I hiked the road to the large millimeter telescope and observatory that houses the Orizaba webcam. 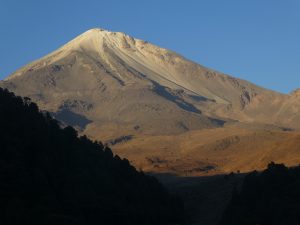 I peered through the fence around the dish and summit for a minute, but no one came out to challenge or greet me, so I stood on the highest reachable rocks to take some photos of a partly-cloudy Orizaba, then hiked and jogged the road back to my car. To my surprise, there was a pickup with a pop-up camper at the trailhead, a rare sight in Mexico. I guessed it meant gringos, and I was right — Montana gringos at that. I felt weird camping next to them in one of the nice wooded spots, so I drove a few hundred yards away to sleep in an inferior place on the open plain. Hopefully hiking to 14,000′, then to 15,000′, then sleeping at 13,000′ would acclimatize me for the next day.

Lesser volcano below the smog

Orizaba and Perote’s other summit

Mexico has a badass mascot