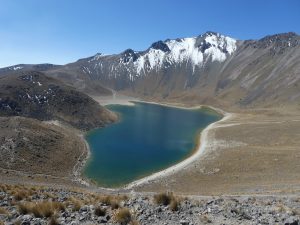 I had five climbing days between flights into and out of Mexico City, and needed to improvise something worthwhile: a mixture of FKT attempts and new peaks. Rolling out of Mexico City late at night in a tiny rental car, I decided to do a bit of acclimatization on nearby Nevada de Toluca. Though I had tagged the highest peak a couple of winters ago, my companions on that trip were not interested in the lesser peaks. Now by myself, I could sleep somewhere high on the mountain, then take my time traversing around the crater rim from Nevado de Toluca to Pico de Aguila, then tag Pico de Humboldt before returning to the trailhead. Tired and following lousy Apple Maps directions, I drove through Raices and straight past the turnoff to Toluca, continuing on a Mexican backroad for awhile before catching my mistake. It was near midnight, so I retraced my route until I spotted a quiet-looking dirt side-road, drove a short distance from the pavement, and figured out how to sleep in a tiny rental. 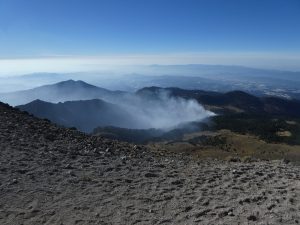 Not wanting to get in trouble with a farmer, I woke early the next morning, drove back toward Raices, and easily found the well-signed turnoff to Nevado de Toluca. After the crazy crowds we had experienced last time, I was surprised to be one of only a few cars at the trailhead. Coming from 5000 feet, and recovering from a couple days of public transit hell, I was painfully slow climbing the trail from the parking lot to the saddle below Humboldt. I followed the familiar route down into the crater, past Laguna de la Luna, and up Toluca’s east ridge. It seems to be “burn shit” season in Mexico, so in addition to the usual haze from Mexico City, there was a solid layer of smoke over the countryside from various fires, including one not too far from where I had slept. 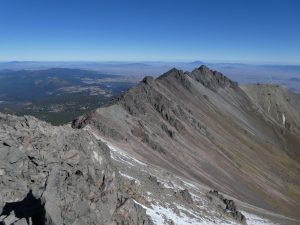 The ridge from Toluca to Aguila supposedly requires scrambling, and sees much less traffic than the normal route I had followed so far. However, I found it to mostly be a class 2 walk, with occasional cairns and bits of trail pointing the way. Only the final climb to Aguila’s summit seemed to require the use of hands for a bit of fun class 3 scrambling. I looked around at the views for a minute, then descended the other side, passing a guy resting on his way up. It was mostly easy going back to the Humboldt saddle, and slippery dirt and talus to its summit. I was of course painfully slow on the climb, but I reminded myself that this was a short acclimatization day. To that end, I sat around on the 14,698′ summit for awhile before returning to the still-quiet parking lot. 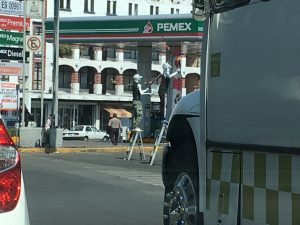 I needed to generate more red blood cells before trying to do anything fast, so I picked out some peaks on the other side of Mexico City and began the long drive east. Starting off with one plan, I plowed right into the chaos of non-freeway Mexican traffic, including a bit of gonzo street performance. As soon as a light turned red, two guys painted silver ran out in front of traffic with step-ladders, climbed up them, and started juggling flaming torches. Impressed but frustrated by my slow progress, I changed plans and eventually reached the toll road around the city, which was both faster and less interesting.

Popo acting up a bit

It’s not Mexico without assault rifles