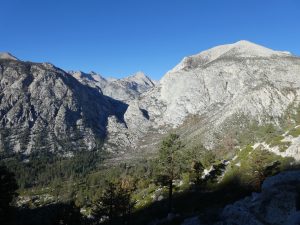 Picket Guard is an obscure peak northeast of the Kaweahs, and one of the most remote SPS peaks. Like its neighbor Kern Point, it is blocked from the east by the deep Kern valley, and from the west by the high Kaweahs and Great Western Divide (and lots of miles). It has previously been dayhiked in a number of ways: Bob did it from Mineral King to the west, Matthew from Whitney Portal via Trail Crest, and Matt via Shepherd Pass. I chose a slightly shorter approach with more cross-country, going from Whitney Portal over Russell-Carillon Col and down Wallace Creek. This involves about 35 miles and 15,000′ of gain, which, with a fair amount of running, took me 13h20. 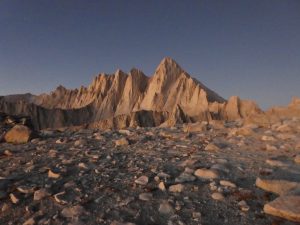 The days are punishingly short now, but the weather continues to be pleasant in the high country. I woke to my 4:00 alarm at Whitney Portal, then joined the 4:30 headlamp parade. Even on a weekday at this time of year, there are regular waves of people getting pre-dawn starts to hike the Whitney trail… I mostly avoided them by taking the old trail, then continuing up the North Fork trail. I passed one pair a short ways up, probably headed for the Mountaineers Route since they were not carrying ropes, moving fast enough that they had no reason to start by headlamp. 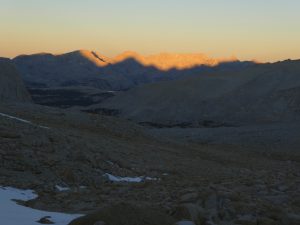 I had forgotten how much of a slog it is to Russell-Carillon Col, and it is somewhat worse in the dark, when you cannot pick the best trail. I grimly slid and plodded up various use trails, finally stowing my headlamp at the broad plain below the two peaks. Dropping over the Col, I was surprised to find almost no snow on the north side, and no ice on Tulainyo Lake. I have visited Wallace Creek several times, and always enjoy the easy cross-country travel and excellent views of nearby peaks like Carl Heller, and the more distant Great Western Divide. 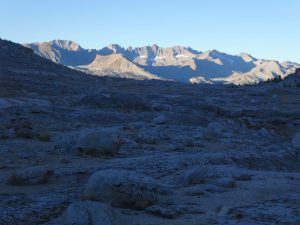 I picked up the old trail near Wallace Lake, which is faint in places and boggy early in the season. It was completely dry now, and I followed cairns and intermittent trail on the long hike/jog down to the JMT. Using this route, I reached it in only about 10 miles, versus something closer to 20 if I had taken the Whitney trail over Trail Crest. 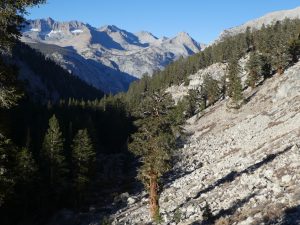 Back on trail, I jogged the descent along Wallace Creek, then put on some Ministry and bombed down the perfectly runnable trail into the Kern, sprinting past two surprised backpackers on my way to Junction Meadow. It was already warm down here around 8000′, and I dreaded the hot climb back out on my return. I easily crossed the “mighty” Kern, grabbing some water along the way, then continued up the new-to-me Colby Pass trail. The lower part passes through some nasty manzanita and buckthorn, which had only partly been cleared, making me glad I had long pants. Since Colby Pass connects two places almost no one visits, the lower Kern and Cloud Canyon, it does not see much traffic. However, it is still maintained, as shown by the brush-clearing and some cut aspens higher up. 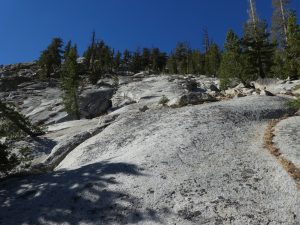 I had stupidly forgotten to download the relevant maps to my phone, so I was guided by an orange line on a gray background, representing the route I had sketched in CalTopo the day before. I left the trail about where that line turned left, easily crossed the trickle of the Kings-Kern, and after a few class 3 moves, made my way up pleasant class 3 slabs toward the toe of Picket Guard’s east ridge. Someone on SummitPost had mentioned traces of an old trail in this area, but I saw nothing, and felt no need of it. 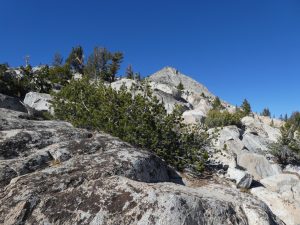 I eventually emerged on the seldom-visited plain east of the Kaweahs near the easternmost Picket Lake. From there, I regained the broad east ridge, then made a long, steady climb through open forest, then a mix of slabs, boulders, and a bit of sand. After a bit of class 3 poking around, I found the apparent highpoint and register canister, just over 7 hours after I had started. The register was a fine Smatko relic from the 1960s, with most of the recent entries being from the usual suspects. I spent some time admiring Triple Divide Peak and the Kaweahs, but also the plain to the south. As far as I know, this is the most remote part of the whole Sierra, far from roads and trails, and not on the way to any destination. If I wanted to live in an illegal cabin in the range, this is where I would build it. 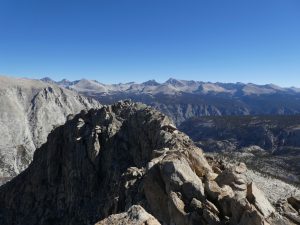 Looking across the deep Kern at Wallace Creek and the distant backside of Whitney reminded me of how much work I had left. I hopped back down the ridge, jogged the runnable parts of the Colby Pass trail, then grabbed more water at the Kern and began the long, gradual climb to Russell-Carillon Col. I felt surprisingly energetic on the lower climb, jogging some of the gentler sections and fast-walking the rest. My sprightliness continued past the JMT, and I jogged many flatter sections of the old trail up Wallace Creek. 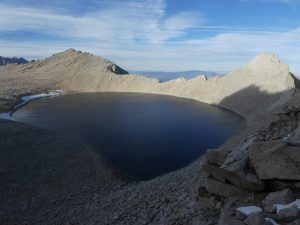 I finally started slowing down on the headwall above Wallace Lake, climbing the boulders above the partly-frozen stream, then hiking to the saddle near Tulainyo Lake. I was really dragging on the final steep climb to the col, but made it in time to get a nice view of the large and unusual lake in the late afternoon light. It was all easy cruising from there, across the sandy plateau, then down the use trails to Upper Boy Scout Lake (much easier in daylight), and along the North Fork trail. I somehow managed to screw it up, first falling when a rock rolled on me in the treacherous section just below Lower Boy Scout Lake, then doing some thrashing when I tried to take one of the “shortcuts” I (mis-)remembered lower down. Still, I was back at the car before dark, where I quickly rinsed off in the creek, then headed into town to forage.

Smoke down the Kern

View back to Wallace Creek

Where my cabin will be