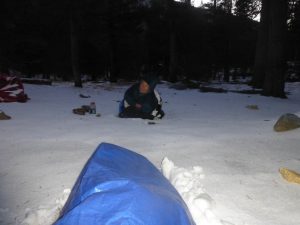 “Backpacking with Bob” is a regular late-summer Sierra occurrence, and an irregular feature on this blog. Perhaps growing tired of repeating a handful of grim headlamp approaches for remote Sierra peaks (e.g. Shepherd Pass, Bubbs Creek), Bob has resigned himself to the dubious pleasures of camping out. In typical Bob fashion, he has also managed to convince others to join him in this strange activity. Previous instances have involved such fun as being snowed on while on the wrong side of the range (sorry for the broken images).

This time it was a trip to East Lake, a drainage in the middle of the range between Independence and Kings Canyon. About half of us came in from either side of the range, setting up camp for 2-3 nights near the bear box at the upper end of the lake to tag various obscure surrounding peaks. Bob seemed to be on a mission to tag every potential 13er with potentially 300 feet of prominence in the Sierra; the rest of us were mostly just along for the ride. I had planned to hike in from Onion Valley with Robert and Kristine, but when informed that they were starting at 5:00 AM, I decided that they should scout ahead. With stable weather and later sunrises this time of year, I saw no reason to put in headlamp time on an overnight. Instead, I slept in, listened to a bit of Supreme Court fiasco on the radio, then got a mid-morning start over Kearsarge Pass. 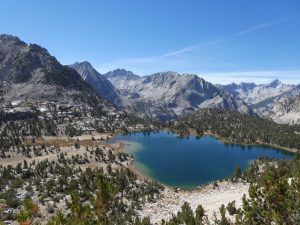 It had been awhile since I had come this way, and I stupidly took the Charlotte Lake trail instead of the shortcut via Bullfrog Lakes, reaching the Lower Vidette Meadow junction. Here I had lunch, stuffed a bar in my pocket, and stashed my pack to tag West Vidette, an unremarkable SPS peak. A few minutes up the trail, I spotted a bear box, and returned to grab my pack and food, figuring I might as well store them legally. It turns out that I should have inspected the bear box more closely: it was padlocked, with a passive-aggressive note from the ranger to the effect that “if you keep leaving trash in bear boxes, we’ll keep locking them.” This was, of course, a bone-headed response, since simply not emptying the box and allowing it to fill with trash would either prompt people to empty it themselves, or effectively close it. So I re-stashed my pack and food as before, just slightly farther up the trail. 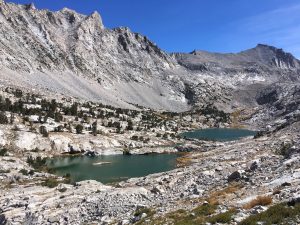 I had been up Vidette Creek once before, to climb Deerhorn on my first Sierra Challenge in 2009, which made it vaguely familiar. However, I had more trouble finding and following the use trail this time, crossing Bubbs Creek too soon, then losing it a couple of times in some willows before the first lake. I followed the creek to just below the first of the upper lakes, then angled southwest toward the saddle between West Vidette and West Spur. The route description said to go up a steep chute to the saddle, but I chose a slabby ramp to its right, leading more pleasantly to the ridge. From there, it was an easy hike to the summit. I should have tagged the higher West Spur as well, but it is not on the SPS list, and I had miles to go, so I ignored it. I retraced my steps, stopping a couple of times to drink from Vidette Creek, taking off my hat and crouching to suck water from the surface. I don’t have a cat’s mastery of fluid dynamics, but I do have lips. 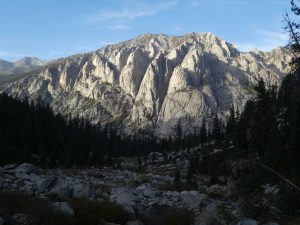 I returned to my unmolested pack, then began the depressing descent from 9600′ to Junction Meadow at 8200′ (I had started my day at 9100′). I passed the usual backpackers, then a large tent city between the East Lake turnoff and the Bubbs Creek crossing. I quickly found the horse ford, but didn’t see an obvious nearby log or rock-hop, and didn’t feel like wading, even though the water was low this late in the year. Conscious of the kids wandering around the tent city, I quickly made my way upstream toward the complex log crossing I remembered from some years back. The route probably changes from year to year, but the idea is to cross Bubbs Creek where it is braided above the junction with East Creek, then cross the latter to regain the trail. After some backtracking and thrashing, I was back on the trail to climb 1300′ to the lake.

Expecting to find Robert and Kristine, I was surprised to have the camping area at the lake’s outlet to myself. I was tired, though, and grateful for a chance to drop my pack and wash off my feet. Only after I had relaxed did I look at the bear box, where I found a note explaining that it was broken, and that the working one was at the other side of the lake. Ugh. I packed up again, circled the lake, and found the others just before dark. I ate “dinner” (instant potatoes, parmesan, flax seed meal), then chatted in the dark for awhile before crawling into my sleeping bag for a long, chilly, and mostly sleepless night. Ah, camping…

Toward Kearsarge from West Vidette