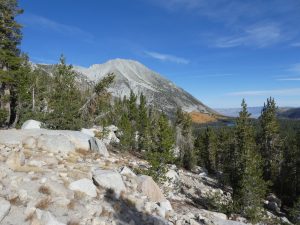 Stanford and Morgan North are two more SPS peaks, found on the north side of the Hilton Lakes drainage, sitting at opposite ends of an undulating talus ridge. They are most easily reached from the Hilton Lakes trailhead in Rock Creek. This Morgan is one of two Morgans within sight of each other on either side of Rock Creek. I don’t know if one or both is named for J. P. Morgan, or if this Stanford is for Leland Stanford (the other is named for his university), but I would like to think that the surveyors were planning a Robber Baron Range in the area, with mounts Carnegie and Rockefeller soon to follow. 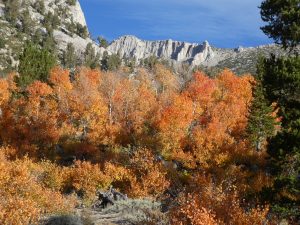 This was my reintroduction to the dusty, manure-filled pack trails of the Sierra, and despite being used to hiking through cow pastures in the Alps, I did not particularly enjoy it. Fortunately the aspens were nearing their prime up high, providing some distraction on the flat, meandering hike around the north side of Patricia Peak and down to Hilton Lakes. At the trail junction, I headed uphill and south, to where the trail ends at Lake 10,363′.

Continuing through the easy cross-country around the lake, I passed a decent-sized tent city, suggesting that I might have company higher up. I continued upstream toward the col south of Stanford Lake, finding boot-prints here and there. From the col, I crossed a shallow bowl, then made an ascending talus traverse toward the ridge. From a saddle, I scrambled a short distance north over big blocks to… Point 12,937′. It took me a few moments to figure out what had happened, and a few curses to come to terms: there was no register, and a crowd of people on a lower bump to the south. Taking out my map, I realize that that was Mount Stanford, and that I would have to cross right back over 12,937′ on the way to Morgan. 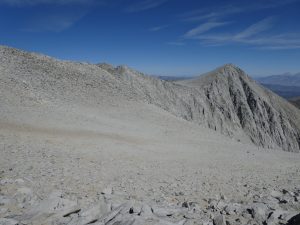 I scrambled south as quickly as I could, and the other group seemed to be taking their time, so I met them on the real Stanford. They turned out to be a SoCal Sierra Club party, led by a friend of an acquaintance. We traded picture-taking duty, then parted ways, with them returning to their tents while I headed back north to Morgan. I was able to bypass 12,937′ and a couple more points to the east, where the traversing was surprisingly easy. I had a bit more trouble on the final points, returning to the ridge to avoid some cliffs, then crossing some steep slabs before reaching the barren plateau below Morgan. A final, short talus climb brought me to the summit, where I finally found the non-Verizon cell coverage so rare in the area. 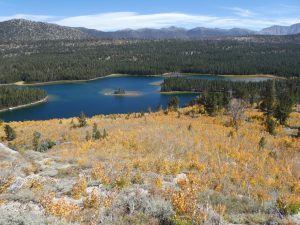 I responded to some email, signed the register, then had a decent boot-ski down Morgan’s east face. After a bit of onerous aspen-thrashing, I reached the edge of Davis Lake, rinsed my feet, and began following a fisherman’s trail. This eventually led around south to the official trails, where I passed a handful of backpackers on my return to the trailhead. I saw no sign of the Sierra Clubbers, who were likely behind me; one-night overnights never make sense…

Mount Warren is a mostly-unremarkable peak west of Mono Lake, notable for three things: having more than 2000 feet of prominence, being on the SPS list, and being the location of one of my favorite Bob trip reports. Unlike Bob, I chose the somewhat longer approach from Lundy Canyon to the north, where the camping is better. I took the old road and trail up to Oneida Lake, then went cross-country, finishing on the peak’s south ridge. On the return, I descended the horrible slope to the northeast, then dropped into Deer Creek, where mostly-easy travel took me back to somewhere near my car at the Lundy Dam. I did not take many photos, or have nearly as memorable an experience as Bob.